Sen. Susan Collins, R-Maine, seen here at the U.S. Capitol on Thursday, is leading a group of Republican senators who have written to President Biden with a request to detail a COVID-19 rescue counterproposal. Chip Somodevilla/Getty Images hide caption 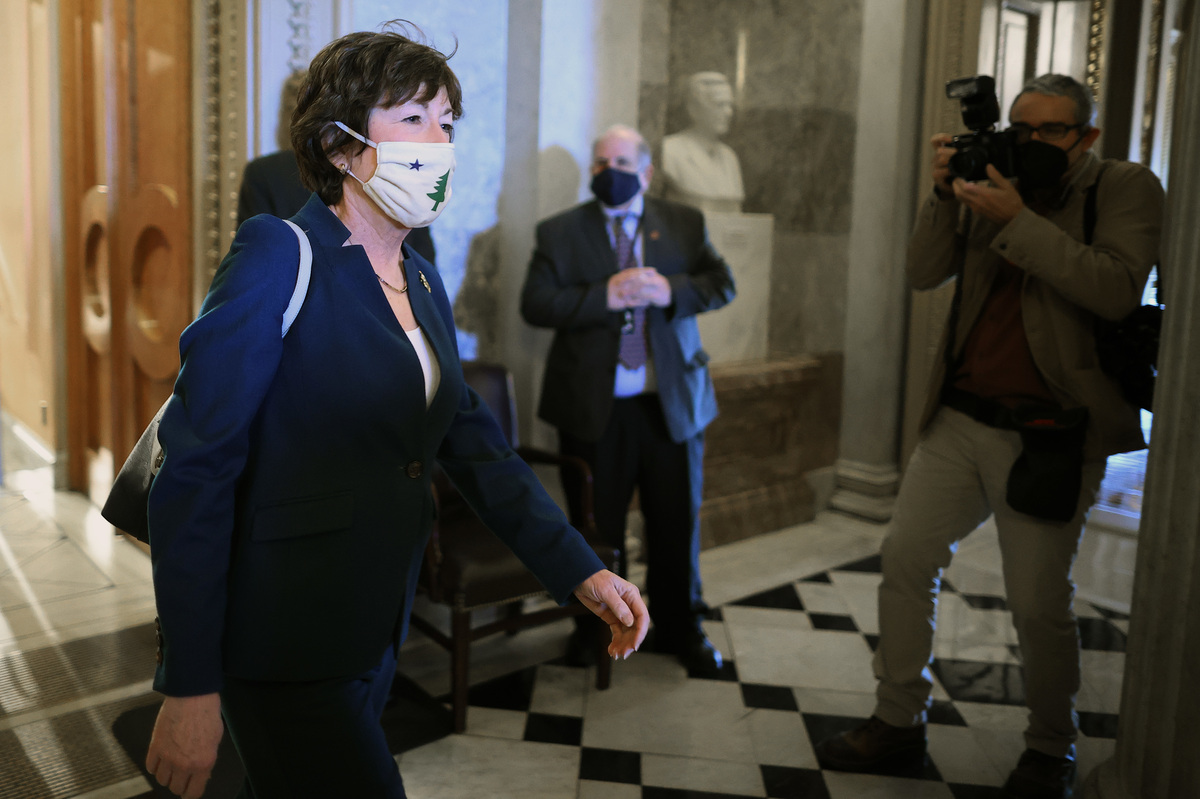 Sen. Susan Collins, R-Maine, seen here at the U.S. Capitol on Thursday, is leading a group of Republican senators who have written to President Biden with a request to detail a COVID-19 rescue counterproposal.

Ten Republican senators are requesting a meeting with President Biden to detail a smaller counterproposal to his administration’s $1.9 trillion coronavirus relief package, an alternative they believe could be approved “quickly by Congress with bipartisan support.”

The outreach from more moderate GOP lawmakers, led by Sen. Susan Collins of Maine, comes as many Democrats look to a process called budget reconciliation to pass Biden’s relief package, something that would enable Democrats to approve the president’s plan without any Republican support.

“We recognize your calls for unity and want to work in good faith with your Administration to meet the health, economic, and societal challenges of the COVID crisis,” the letter dated Sunday reads.

Republicans have balked at the price tag of Biden’s $1.9 trillion package, especially coming weeks after then-President Donald Trump signed a $900 billion relief measure into law. Sen. Bill Cassidy of Louisiana, who also signed the letter, told Fox News Sunday that the counterproposal would cost about $600 billion.

The GOP senators plan to detail their counterproposal on Monday.

That 10 Republicans signed on is notable because that’s the number that would be needed to combine with Senate Democrats’ 50 votes to reach the 60-vote, filibuster-proof threshold to pass legislation under regular Senate rules.

“We’re certainly open to input from anywhere where we can find a constructive idea to make this package as effective as possible, but the president is uncompromising when it comes to the speed that we need to act at to address this crisis,” he said.

On Friday, Biden himself told reporters at the White House: “I support passing COVID relief with support from Republicans if we can get it. But the COVID relief has to pass.”

In the letter Sunday, the senators note that earlier COVID-19 relief packages passed with bipartisan support and that their proposal includes some elements similar to those in Biden’s plan, including allocating $160 billion for vaccine development and distribution, testing and tracing, and personal protective equipment.

“Our proposal also includes economic relief for those Americans with the greatest need, providing more targeted assistance than in the Administration’s plan,” the letter reads. “We propose an additional round of economic impact payments for those families who need assistance the most, including their dependent children and adults.”

Notably, the letter does not mention state and local aid, which was a key sticking point in past rounds of relief negotiations. Biden’s package includes $350 billion in emergency funding for state and local governments.

Portman had previously warned the Biden administration of moving forward on a new round of relief legislation without GOP support, saying it “poisons the well.”

“My hope is that we won’t go down this path of trying to circumvent the supermajority and just jam something through,” Portman told NPR’s Susan Davis. “I think that would set the tone for the administration that would be really problematic for the country and, frankly, bad for the Biden administration.”
Source Link