A supporter gets the crowd amped up for opposition presidential candidate Han Kuo-yu at a campaign rally at a Hakka temple in Taiwan’s Miaoli county in November. Emily Feng/NPR hide caption 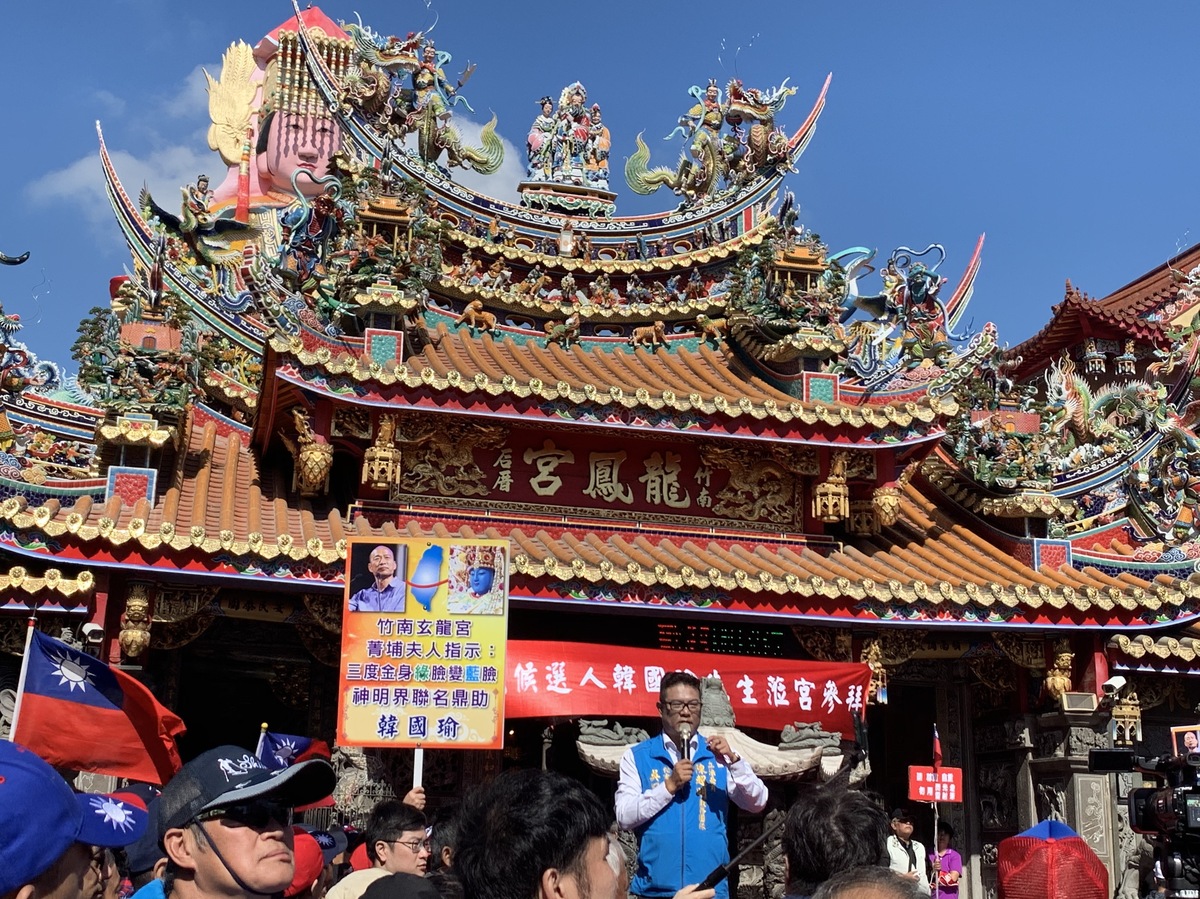 A supporter gets the crowd amped up for opposition presidential candidate Han Kuo-yu at a campaign rally at a Hakka temple in Taiwan’s Miaoli county in November.

At a recent election campaign event in Taiwan, a procession of women beat ceremonial drums, dance and wave lotus-shaped umbrellas in celebration. But beyond the slogans promising national security and prosperity, the topic on everyone’s mind is what to do about China.

The star of the event is Han Kuo-yu, a pro-Beijing candidate running for president with the opposition Kuomintang, who poses a stark contrast with the current leaders.

“[The governing party] relentlessly uses Taiwan independence as a way to negate China,” Han, the mayor of the city of Kaohsiung, said to rallygoers at the event in Miaoli county, just south of Taiwan’s capital of Taipei. “However, Taiwan and Beijing are one family.”

Taiwan, a U.S. ally, has its own government, military and capitalist economy, but the Chinese Communist Party says Taiwan belongs to the People’s Republic of China.

Voters are preparing to elect Taiwan’s next president and legislature on Jan. 11. While the leading opposition candidate sympathizes with Beijing, President Tsai Ing-wen’s Democratic Progressive Party calls China the “enemy of democracy.”

Many Taiwanese are also closely watching what is happening in Hong Kong, where more than five months of sometimes violent protests are pushing back against mainland China’s control. Taiwan largely wants to avoid becoming another Hong Kong, which could tip the election in favor of President Tsai, who is running for reelection and enjoys a widening lead in opinion polls.

Taiwan’s President Tsai Ing-wen delivers a speech as she launches her reelection campaign in Taipei, on Nov. 17. Taiwan will hold its presidential election on Jan. 11. Chiang Ying-ying/AP hide caption 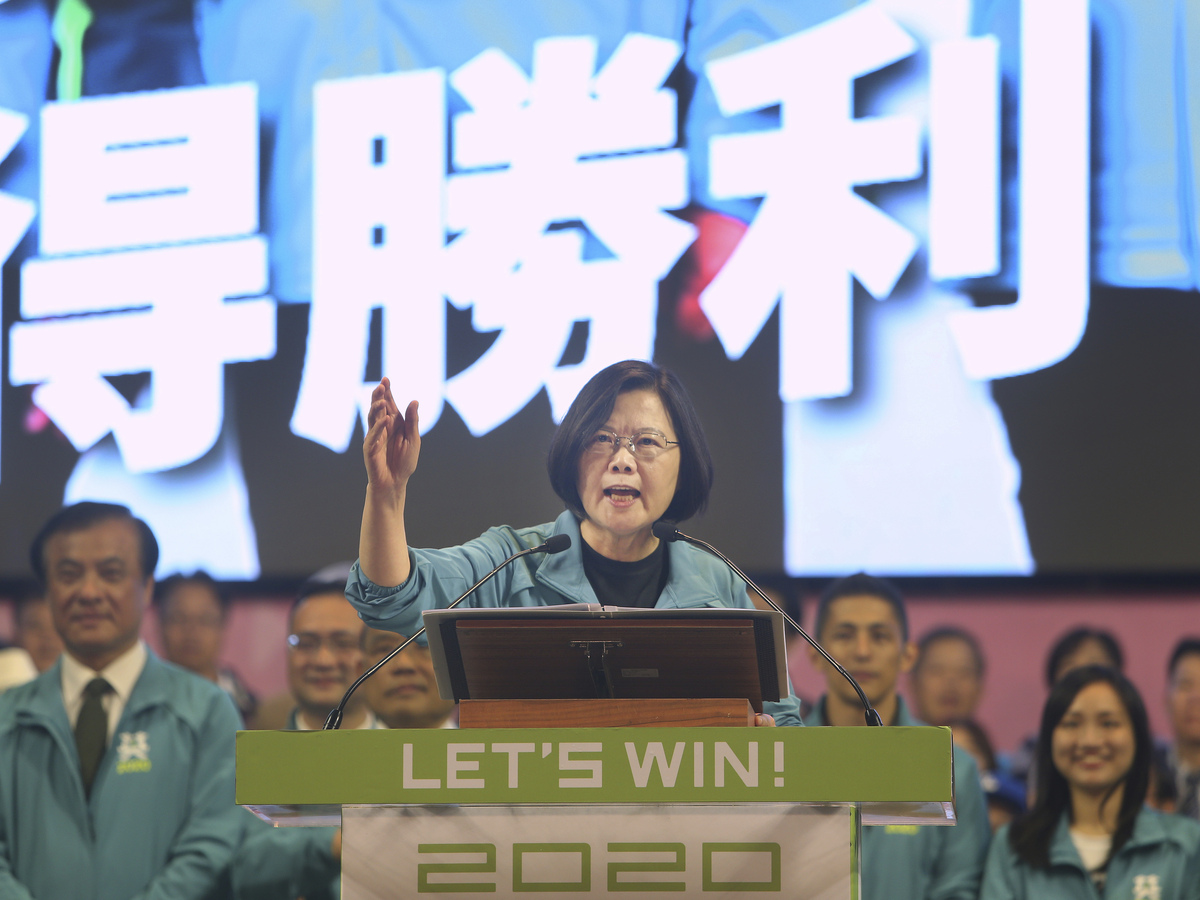 Taiwan’s President Tsai Ing-wen delivers a speech as she launches her reelection campaign in Taipei, on Nov. 17. Taiwan will hold its presidential election on Jan. 11.

“We see the freedom enjoyed by the Hong Kong people is being chipped away,” Joseph Wu, Taiwan’s foreign minister, told NPR. “We see the experience of Hong Kong is not quite what the Chinese government promised in the early days.”

It’s called “one country, two systems,” meaning Hong Kong is part of China but keeps some autonomy, including government functions and independent courts — in theory.

Many Hong Kongers accuse the leadership in Hong Kong and Beijing of eroding their limited autonomy. That sentiment is in part why thousands have taken to the street in anti-government protests that are now in their sixth month.

Taiwan’s leaders flatly reject any proposal for Taiwan to enter a similar arrangement with China. 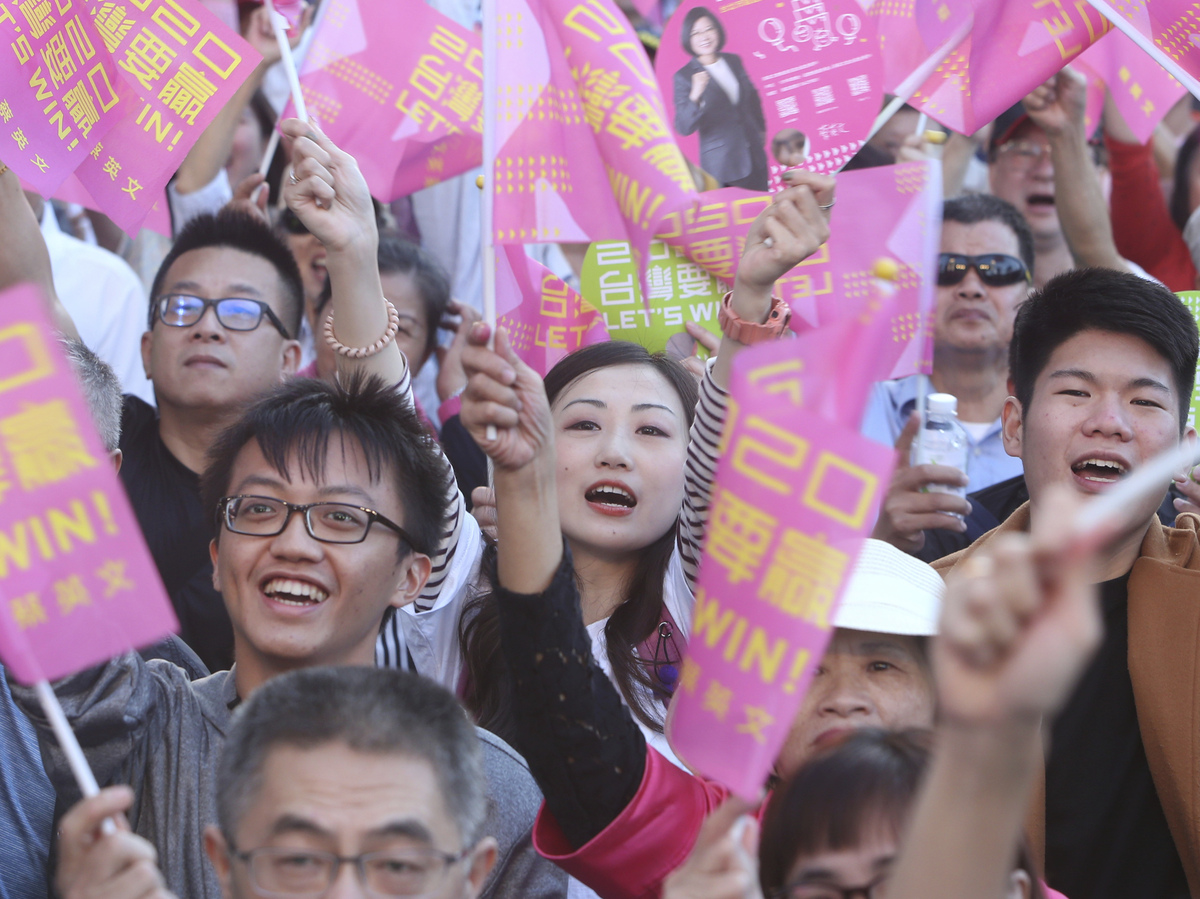 Supporters of President Tsai cheer at her reelection campaign launch in November.

More than 86% say they would prefer to maintain Taiwan’s current status, according to the latest polls.

Even the opposition candidate Han, who has sparked controversy over his pro-Beijing stance, disavowed the Hong Kong policy after the protests erupted. “Taiwanese people can never accept [‘one country, two systems’], unless it’s over my dead body,” he said.

Taiwan has been preparing for China to attack ever since Nationalist leader Chiang Kai-shek retreated to the island in 1949, along with 2 million of his supporters and soldiers, after losing a civil war against Mao Zedong’s Communist forces.

Xi has said Taiwan should unify with mainland China peacefully but has threatened to use force to do so.

As Beijing steps up militaristic rhetoric, the U.S. has stepped up its support f0r the island. It has bulked up its de facto embassy in Taipei and passed legislation encouraging official travel between the U.S. and Taiwan. This year, the U.S. made a high-profile $8 billion sale of fighter jets and other military equipment to the island, angering Beijing.

Taiwan considers itself a bulwark of democracy in the Asia-Pacific region, where China is increasingly asserting its power.

Supporters of Kuomingtang presidential candidate Han Kuo-yu wave the flag of Taiwan. Many in the party favor closer ties with Beijing, although it is a minority view in Taiwan. Emily Feng/NPR hide caption 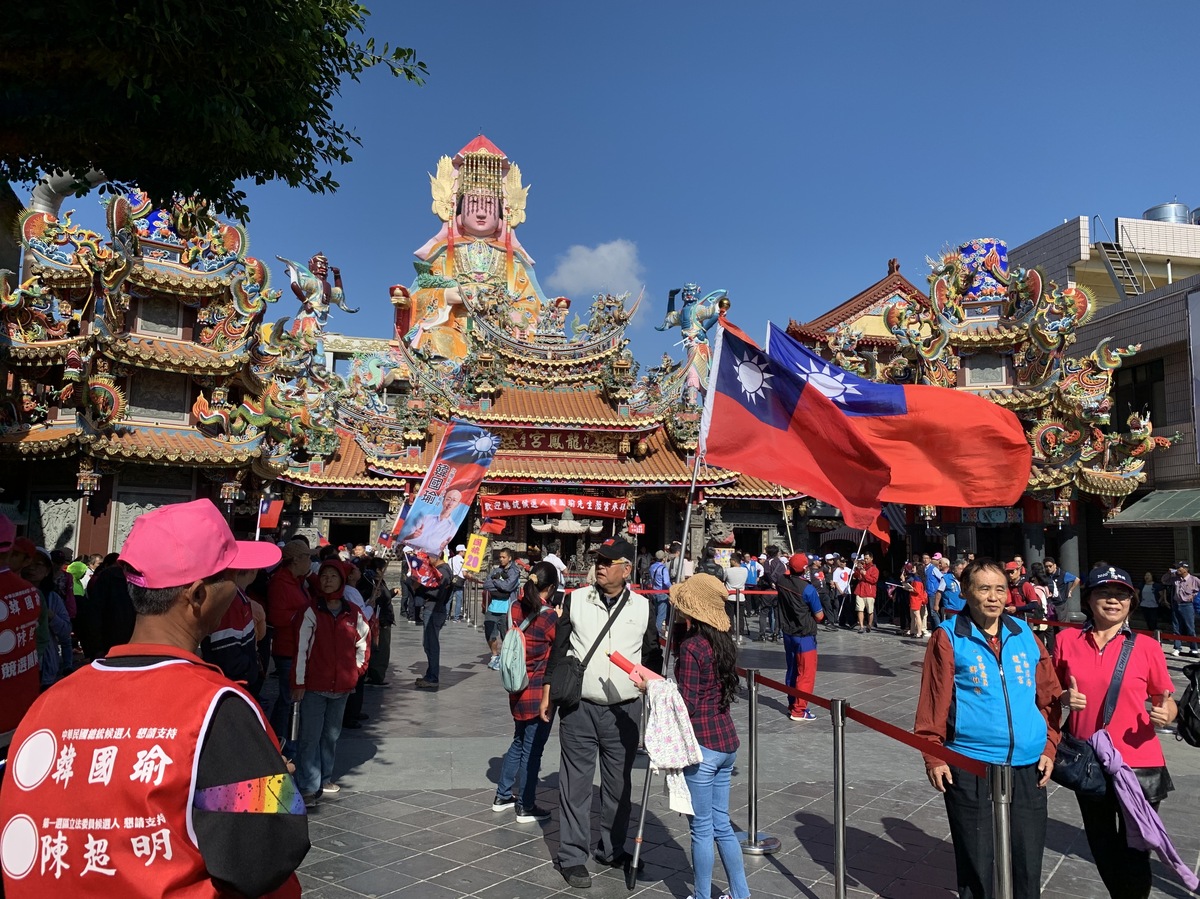 Supporters of Kuomingtang presidential candidate Han Kuo-yu wave the flag of Taiwan. Many in the party favor closer ties with Beijing, although it is a minority view in Taiwan.

“We are on the front lines. We have faced all these threats and Chinese infiltration for decades,” says Freddy Lim, a death metal rocker turned co-founder of one of Taiwan’s most liberal political organizations, the New Power Party.

The nearly 5-year-old party is now going through an existential crisis over whether to support Tsai’s reelection bid. In August, Lim quit the party to run for reelection to his legislative seat as an independent so he could back President Tsai, arguing the stakes of losing the presidency to a pro-Beijing candidate are too high.

Central to every election in Taiwan is the question: Does Taiwan, a small island, sidle up to its much bigger neighbor China to develop its economy or keep it at an arm’s length?

“There is no such thing as economic and trade without politics in Taiwan,” says Lev Nachman, a doctoral candidate researching Taiwanese political movements.

Some politicians have tried to stake out some middle ground, such as the upstart Taiwan People’s Party that formed in August. It has come under criticism for seemingly waffling on its stance toward Beijing.

“We try to enhance the collaboration with the people with the civil society of mainland China, especially in terms of economics and culture. We very much support the kind of nongovernmental interaction,” explains Kimyung Keng, one of the Taiwan People’s Party candidates running for a district legislative seat.

Unify one way or another

Despite its small size and dwindling number of international allies, Taiwan has managed to nurture a robust economy. Homegrown corporate champions include electronics-making giant Foxconn and the Taiwan Semiconductor Manufacturing Co. Wages are rising and the unemployment rate is just under 3.8%, one of the lowest levels in two decades. President Tsai has built up economic ties with Southeast Asia to diversify Taiwan’s trade portfolio away from mainland China.

But supporters of opposition candidate Han say the president has made a mistake in shutting out Beijing. Taiwan should not be afraid of unification with China, rallygoers at the recent campaign event told NPR.

Chang An-lo, speaks with foreign media in Taipei, in 2014. After serving 10 years in a U.S. federal prison on drug trafficking charges, Chang returned to Taiwan in 2013 to pursue political ambitions as the leader of the China Unification Promotion Party. Wally Santana/AP hide caption 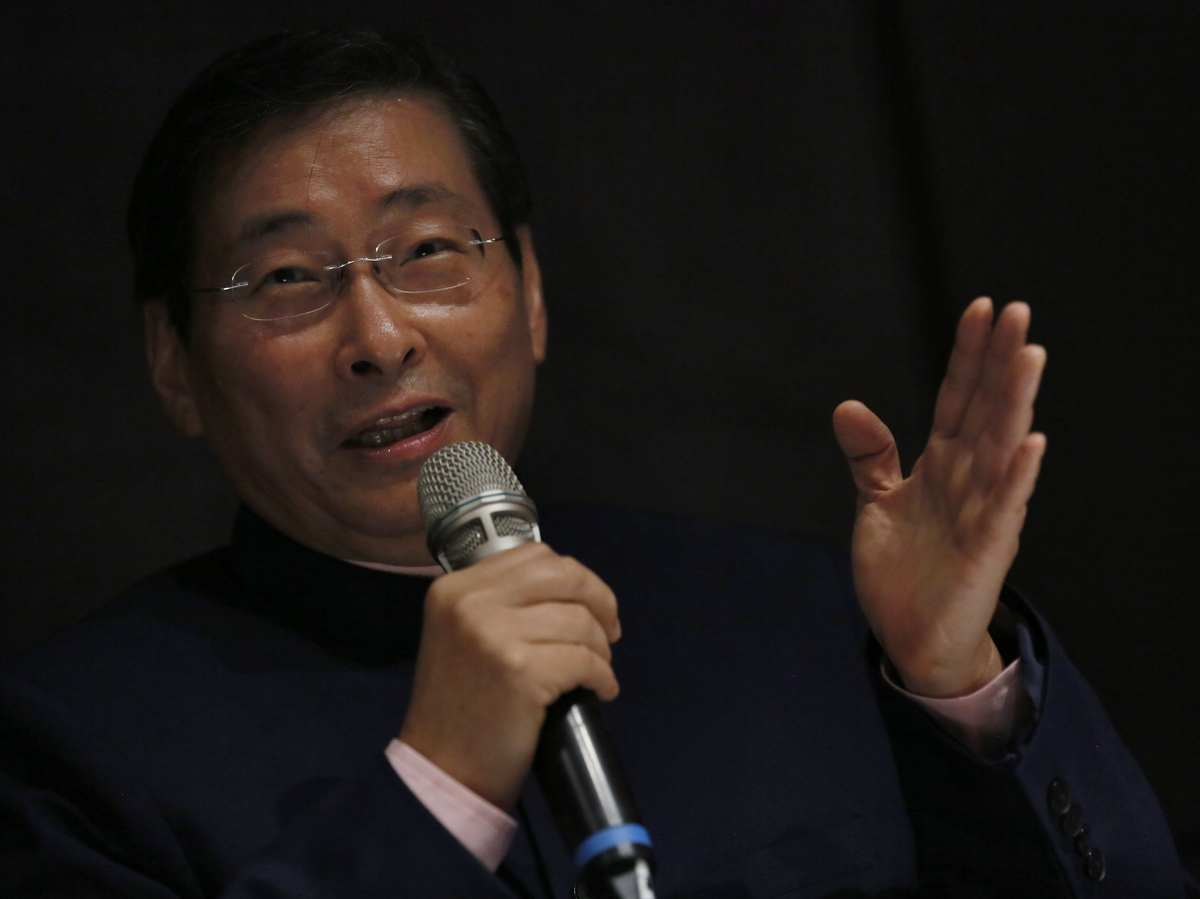 Chang An-lo, speaks with foreign media in Taipei, in 2014. After serving 10 years in a U.S. federal prison on drug trafficking charges, Chang returned to Taiwan in 2013 to pursue political ambitions as the leader of the China Unification Promotion Party.

The staunchest of the pro-China camp is prominent gangster turned politician. Chang An-lo once helped lead one of Taiwan’s biggest gangs, the Bamboo Union. Now, he heads the Chinese Unification Promotion Party, which nominates no candidates of its own but backs every pro-Beijing Kuomintang candidate.

“When China unifies Taiwan either violently or peacefully, do you want military rule or one country, two systems? The latter is still the best way for Taiwan,” says Chang. “How could an economy of 1.4 billion people be bad for Taiwan? And what’s wrong with returning to China, as we are all Chinese?”

“There is a huge generational difference,” says Luo Chi-cheng, a Democratic Progressive lawmaker running for reelection. “Young people pay close attention to what happens in Hong Kong because [otherwise] in the future, Taiwan may be forced to accept the so-called one country, two system model.”

Older voters tend to care more about economic development, according to Luo. It is the younger Taiwanese, he notes, who have longer to live and more opportunities to decide future election outcomes.