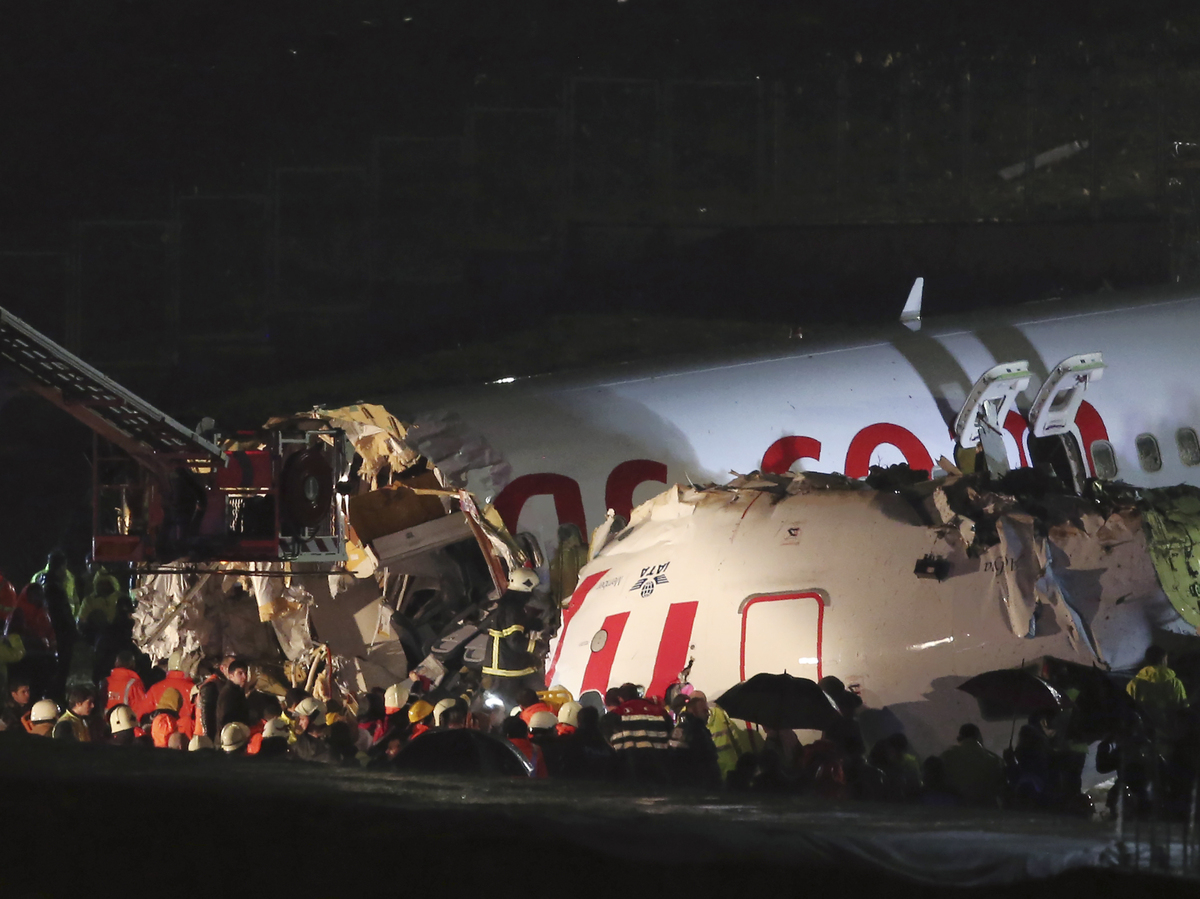 An airplane careened off a runway at Istanbul’s Sabiha Gokcen airport on Wednesday evening, dropping more than 100 feet to the ground where it broke into pieces. Turkish authorities say that at least three people were killed and 179 others were injured.

The plane, from a Turkish low-cost carrier called Pegasus Airlines, was coming from the western city of Izmir and was attempting to land in Istanbul during bad weather.

“According to the information we obtained, the plane … drifted to the land as a result of the hard landing,” Turkey’s Health Minister Fahrettin Koca told the Anadolu news agency.

Istanbul’s governor Ali Yerlikaya said it skidded on the runway for about 160 feet, according to the news agency. “Then, it falls from a height of around 30 meters [100 feet] here,” he said, over a road and eventually an empty field.

CCTV footage obtained by Reuters shows the plane moving down the runway before suddenly disappearing, apparently off a cliff. It reportedly also burst into flames.

Photos from the scene show the plan broken into three pieces, with the nose completely severed from the rest of the plane. According to The Associated Press, passengers “had to evacuate through cracks in the smashed plane.” The aircraft was carrying 177 passengers and six crew members, Koca stated.

The plane skidded off the runway, crashing into a field and breaking into pieces. Emrah Gurel/AP hide caption

According to Flightradar24, the plane is a Boeing 737-800 that was built in 2009. It previously was operated by Air Berlin and joined the fleet of Pegasus Airlines in 2016.

Flight positioning data obtained by the tracking website shows the plane landing in the center of the runway, before veering to the left of the lane and eventually careening off its edge.

The airline stated that flights to and from the airport in Istanbul were suspended in the wake of the incident because of the runway closure.

According to Anadolu, prosecutors have launched an investigation into the crash. Reuters reports that a local broadcaster reported that the plane’s two pilots are in serious condition.

Hasan Eraydin told the AP that he was driving home when he saw the crash.

“We were about 30 meters away … we tried to get to the scene to help, but there was some sort of a canal in between and it was impossible,” he said. “We thought ‘God willing, no one has died’.”

This isn’t a first for a plane belonging to this airline. Last month, another of its planes slid off the runway at the same airport, though nobody was injured.

In 2018, in a particularly dramatic incident, a Pegasus plane skidded off a runway and down a cliff face. It halted before it fell into the Black Sea below it, and nobody on board was hurt.