A passenger, right, is hugged by Cambodia Prime Minister Hun Sen after she disembarked from the MS Westerdam, at the port of Sihanoukville, Cambodia, on Friday. Heng Sinith/AP hide caption 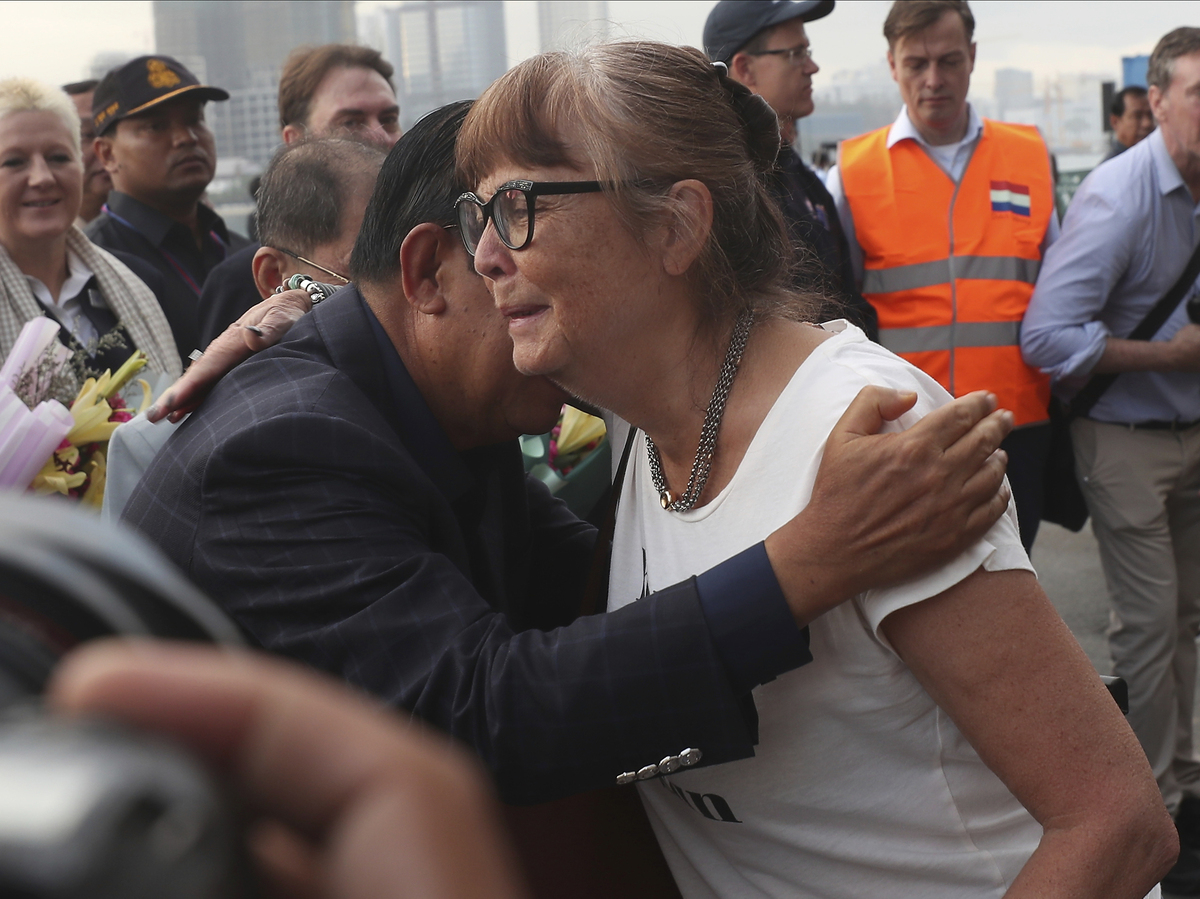 A passenger, right, is hugged by Cambodia Prime Minister Hun Sen after she disembarked from the MS Westerdam, at the port of Sihanoukville, Cambodia, on Friday.

Passengers and crew aboard a cruise ship denied entry at several Asian ports in recent days due to fears of coronavirus, cheered as they were finally allowed to disembark in Cambodia on Friday.

The MS Westerdam with nearly 1,500 passengers aboard had been rebuffed by Japan, Taiwan, Thailand, the Philippines and the U.S. territory of Guam before ultimately being allowed to dock at the Cambodian port of Sihanoukville.

Although none of the passengers or crew aboard had reported any symptoms of COVID-19, the pneumonia-like disease caused by the novel coronavirus, concern of contagion had forced them to remain at sea after the vessel docked in Hong Kong on Feb. 1.

Cambodia’s authoritarian prime minister, Hun Sen, said he allowed the Westerdam to call in his country for humanitarian reasons and greeted the passengers as they disembarked.

“How wonderful it is to be here. Thank you very much to the prime minister. He has a wonderful heart,” said Anna Marie Melon, from Queensland, Australia, according to The Associated Press. “I’m very excited (to be here),” she said as she waved a rose Hun Sen handed to her.

“Cambodia alone, even the United States, Guam, did not let us land, but Cambodia did, so that’s wonderful. Absolutely wonderful,” Joe Spaziani, 74, of Florida told local reporters. “We appreciate it very very much. It’s been a long struggle and we appreciate everyone being here.”

Holland America, which operates the Westerdam, said in a statement on Thursday that 20 samples taken aboard the ship had come back negative for coronavirus infection after being tested by the Pasteur Laboratory in Phnom Penh.

Aboard another cruise ship, the Diamond Princess, passengers were celebrating Valentine’s Day in quarantine as they remained shipbound at the port of Yokohama, near Tokyo. Nearly 220 people aboard the ship carrying 3,700 passengers and crew have been diagnosed with coronavirus infection. 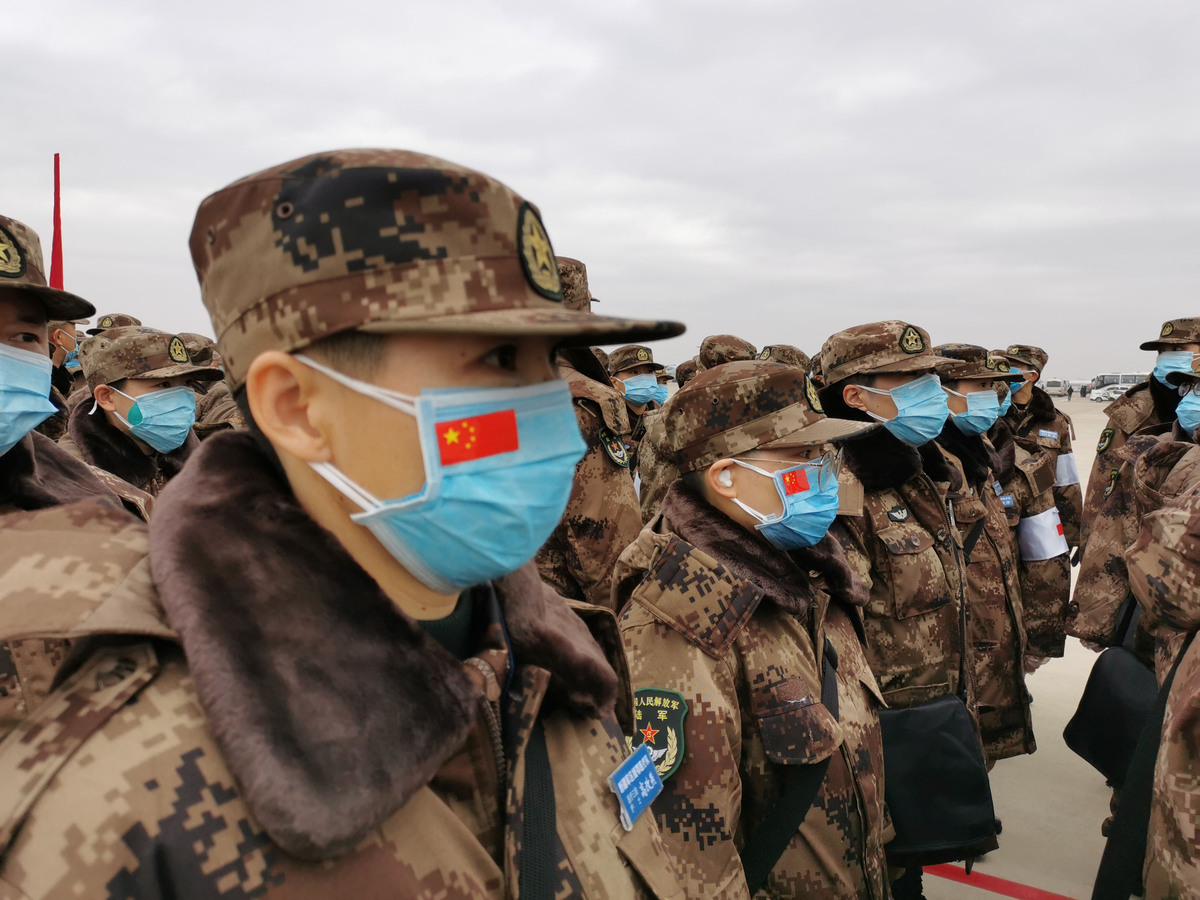 In China, where the virus was first identified in December, health officials reported 5,090 new infections and 121 new deaths, bringing the total number of cases in China since the outbreak began to 55,748, with 1,380 deaths. In its announcement on Thursday, the National Health Commission said the new toll takes account of some deaths in Hubei province, the epicenter of the epidemic, that were previously double counted.

According to the World Health Organization’s latest situation report on Thursday, there have been another 447 confirmed cases in 24 other countries outside of China, with one additional death.

The figures from China were the second batch released after Hubei changed the diagnostic criteria for the disease, adding patients who were showing symptoms of COVID-19 but that either had not been tested for the virus or had previously tested negative. The change, apparently in response to a scarcity of test kits and concerns about their reliability, caused a sharp uptick in cases.

The World Health Organization on Thursday took pains to dispel concerns that the sudden increase resulting from the revised criteria in Hubei meant any shift in the mortality or severity of the epidemic.

“This does not represent a significant change in the trajectory of the outbreak,” said Mark Ryan, head of WHO’s health emergencies program.

Meanwhile, a Chinese state-owned biotech company announced Thursday that antibodies harvested from the plasma of patients who had recovered from COVID-19 was showing promise as a possible treatment for the disease.

China National Biotec Group said it had detected antibodies to the novel coronavirus in plasma of people who had been infected but recovered. They used the antibodies to treat patients in critical condition, with significant results, according to the official Xinhua news agency.

The report said the company sent a team to collect plasma from patients in the central city of Wuhan, where the outbreak began and where the largest number of coronavirus cases are still found, on Jan. 20.

“According to clinical results, 12 to 24 hours after the patients received the treatment, they have shown improved clinical symptoms, with main inflammatory indexes decreased significantly and some key indexes such as blood oxygen saturation improving comprehensively,” Xinhua reported.