President Trump speaks during the daily briefing on the novel coronavirus at the White House Wednesday. Mandel Ngan/AFP via Getty Images hide caption 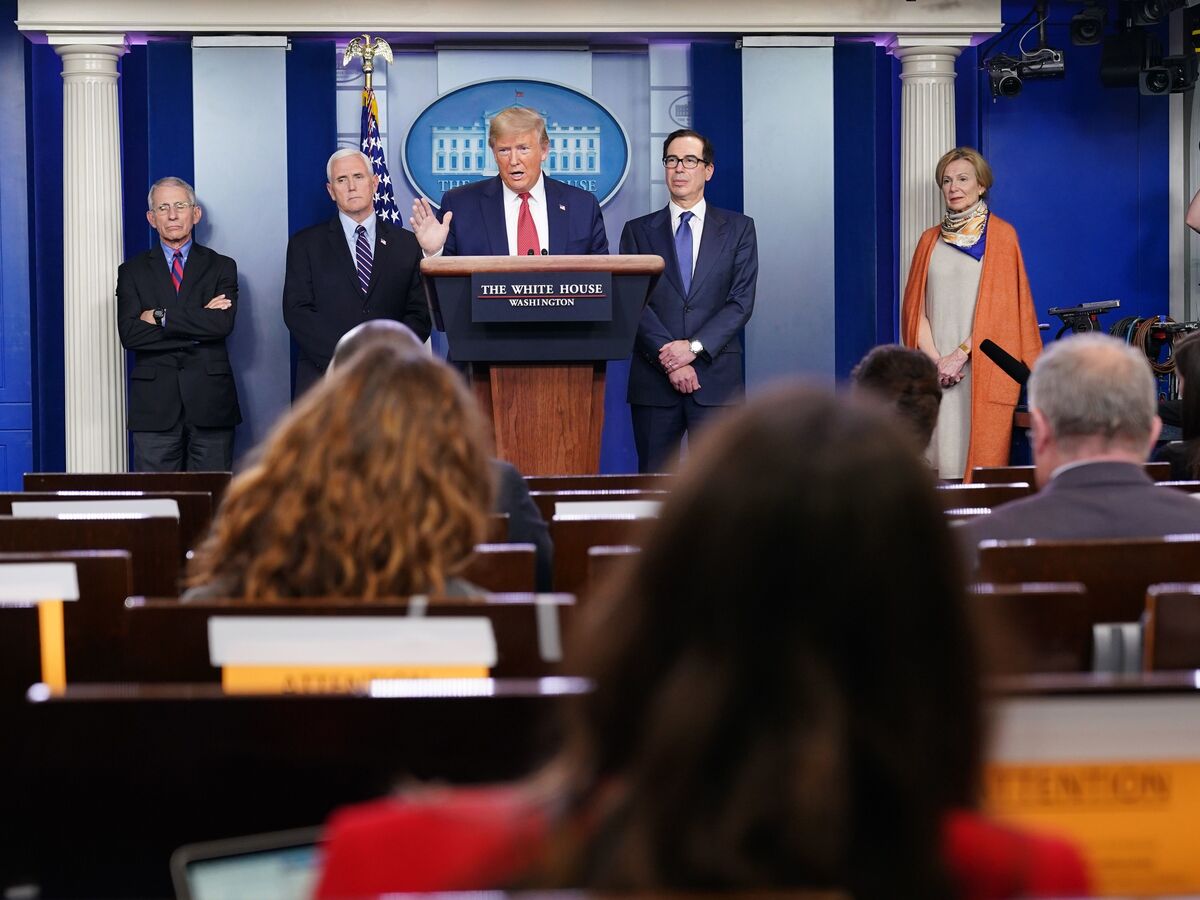 President Trump speaks during the daily briefing on the novel coronavirus at the White House Wednesday.

The White House’s pandemic task force convened another briefing on Wednesday afternoon amid a tense denouement for legislation aimed at helping an economy poleaxed by the disaster.

Last-minute objections on Wednesday threw the status of the bill into uncertainty after many proclamations of victory by other lawmakers about its contents.

But President Trump stood squarely behind the bill, saying he would immediately sign it. He also said he hoped that portions of the country would be able to go back to work and school soon, and said some may be able to go back sooner than others.

Treasury Secretary Steven Mnuchin said his “expectation is that this bill passes tonight.”

Trump also said that American testing capacity is growing “exponentially” — although the particulars weren’t clear — and that the gap continues to close between the number of people who need tests and those available for them.

Trump crowed about what he called the success of the response to the crisis and detailed what he said were shipments of ventilators to New York and other deployments of supplies around the country. New York’s governor and its mayor, both Democrats, are happy, Trump said.

“It’s hard not to be happy with the job we’re doing, that I can tell you,” he said.

Legislation called close — but not there

Meanwhile, a group of Republicans said they considered the unemployment provisions in the relief legislation to be too generous — Sen. Tim Scott, R-S.C., said Congress couldn’t create a situation in which he said people would be rewarded more for being out of work than in their previous jobs.

At the same time, at least one liberal senator — Vermont’s Bernie Sanders, an independent who caucuses with Democrats and is running for president — said he would stop the legislation over what he called its “corporate welfare” if Scott and the Republicans didn’t give way.

The late skirmishing created an awkward gap between the claims of success by many members of Congress, including Senate Majority Leader Mitch McConnell, R-Ky., and the slogging that appeared to remain necessary to actually get the bill passed in both chambers and then to President Trump.

Treasury Secretary Steven Mnuchin has been negotiating on his behalf with McConnell and Democrats — led in the Congress by House Speaker Nancy Pelosi and Senate Minority Leader Chuck Schumer.

Mnuchin didn’t name the Senate Republican hold-outs at the White House press conference on Wednesday but he rejected their notion that what he called “enhanced unemployment” would create incentives for people to quit or were too generous.

Work on the legislation has been slower than hoped as members of Congress wrangle over what could be the largest such support legislation in American history, one with a headline value of more than $2 trillion.

Trump extolled what he called the virtues of the economic rescue package and said it would ensure the United States could “go up like a rocket” when it emerges from the other side of the crisis.

The coronavirus disaster is worsening by the day. Cases in the United States have surpassed 60,000 with nearly 900 deaths.

Officials in New York have warned they don’t expect infections to peak for weeks or months; California and Washington state also remain badly afflicted too.

But the different times of arrival by the virus in various locations means that numbers of cases are increasing at different rates in unexpected new places; New Orleans, for example, has now seen about 40 deaths as the infection appeared to accelerate there.

Schools and businesses are closed across the nation as Americans stay home and avoid large groups in an attempt to slow the spread of the coronavirus. That has had deleterious consequences for restaurants, brick-and-mortar business and travel; millions of people could be out of work.

Mnuchin detailed the ways that programs in the relief legislation under consideration by Congress would help businesses and workers, including via direct payments, loans and other transfers from the government.

Mnuchin said he thought the payments and programs in the bill would help the economy long for about three months — but “hopefully this war will be won quicker,” he said.

Trump responded to the same question from a reporter about how long he thought the legislation would sustain the United States. The president said he couldn’t give a definitive answer but he considered the door open to the prospect of more stimulus.

Trump sought this week to shift the national mood from one of survival to one of transition, using Tuesday to talk up his hopes about reopening many of America’s shuttered businesses soon even as work continued fighting the contagion.

The president said in a Fox News special aired from the White House that he thought life might get back to normal by Easter.

In a subsequent show he sketched out an imaginary scene of churches — many empty because of social distancing measures aimed at isolating the coronavirus — filled with worshippers for Easter services on April 12.

Trump’s goal is well within the limits set by many public officials and businesses around the United States; schools in many places still would be closed by the time of the scene he pictured on Easter Sunday.

The president sought to clarify later on Tuesday at a White House briefing that he’d let data and the recommendations of public health officials guide the federal recommendations about social distancing and other mitigation measures.

Calling it a “medical crisis, not a financial crisis,” Trump said he wanted to reassure the American public that any decision made on loosening mitigating measures currently in place, such as social distancing, would be made using the “best science, the best modeling and the best medical research there is anywhere on Earth.”

Trump said the administration would assess after next week whether or not current social distancing measures aimed at stemming the spread of the coronavirus will remain in place.

Wednesday marks day 10 of the 15-day period of the White House’s “15 Days To Slow The Spread initiative.” Trump said “we’ll be speaking to everybody” about what follows and that “it’ll be an interesting period of time.”

California Gov. Gavin Newsom, a Democrat, reportedly said on Wednesday that he didn’t believe the end of the crisis was in sight.

CA gov @GavinNewsom, appearing in direct conflict with suggestion from @POTUS yesterday that stay at home orders soon could be lifted: “Don’t think for a second that we’re a day or two from lifting that order. We’re not. We’re not even a week or two.”

The president also took part in a phone call with non-profit organizations on the COVID-19 response Wednesday afternoon.

“They have been fantastic,” Trump said.