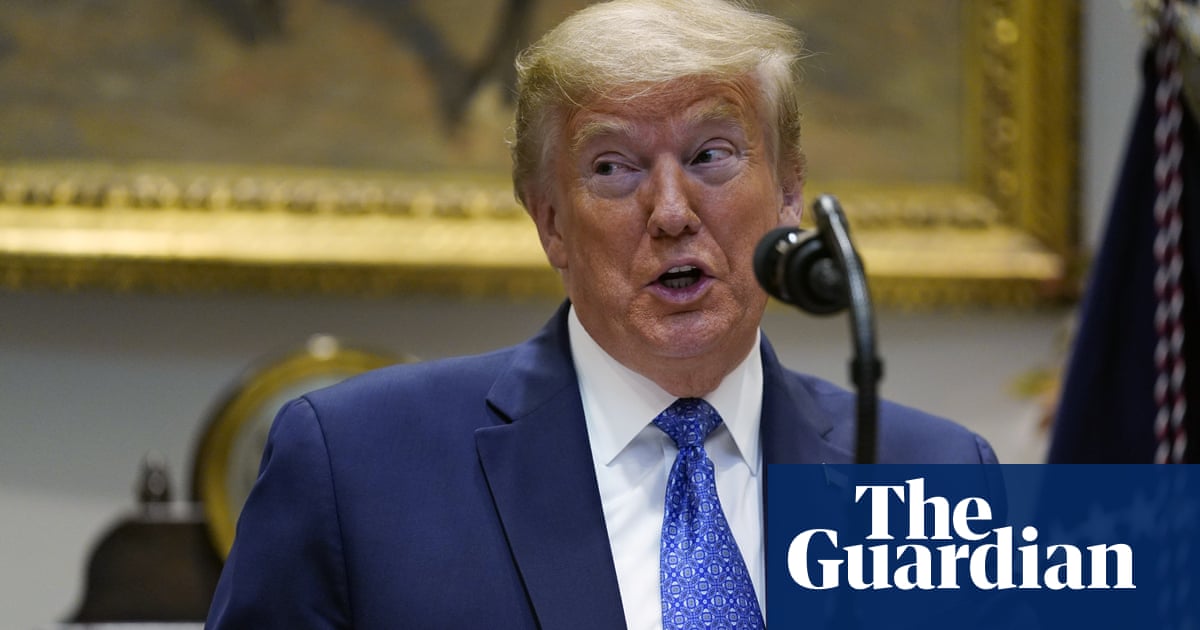 A spokeswoman for Donald Trump confirmed on Tuesday morning that the US president is taking a malaria drug as a defense against Covid-19, despite his own administration’s warnings that the drug could have dangerous side-effects.

The confirmation came hours after the House speaker, Nancy Pelosi, expressed alarm that Trump was taking the drug since he is “morbidly obese”, in her words.

“I can absolutely confirm that,” she said.

Trump told reporters at the White House on Monday that for “a couple weeks” he had been taking hydroxychloroquine, which he first touted as a Covid-19 treatment in March, before the Food and Drug Administration (FDA) warned that the drug could cause irregular heartbeats and other cardiac trouble.

The FDA has approved the drug for the treatment of malaria, lupus and rheumatoid arthritis.

“You’d be surprised at how many people are taking it … The frontline workers, many, many are taking it,” Trump said on Monday.

On Tuesday, McEnany told Fox News: “Any use of hydroxychloroquine has to be in consultation with your doctor. You have to have a prescription. That’s the way it must be done.”

She also said she could not describe Trump’s “exact rationale” and added: “The president has said pretty widely that this is a drug that he had looked at with optimism, but nevertheless he said that this is a decision that must be made with the doctor.”

The White House on Monday night issued a statement by Sean P Conley, Trump’s doctor, that did not quite confirm Trump’s claim to be taking hydroxychloroquine, muddling the issue.

“The president is in very good health and has remained symptom-free,” the statement said.

“After numerous discussions he and I had regarding the evidence for and against the use of hydroxychloroquine, we concluded the potential benefit from treatment outweighed the relevant risks.”

“He’s our president, and I would rather he not be taking something that has not been approved by the scientists, especially in his age group and his, shall we say, weight group,” the House speaker, 80, told CNN of Trump, 73, on Monday evening.

“Morbidly obese, they say. So, I think it’s not a good idea.”

Trump is obese, as the federal Centers for Disease Control and Prevention (CDC) defines the term, but he does not appear to qualify as “extremely obese”, the top category. The ambiguity stems from unreliable data, as Trump tends to exaggerate his height and lowball his weight.

The FDA advised in April that hydroxycholoroquine and chloroquine “have not been shown to be safe and effective for treating or preventing Covid-19”.

“While clinical trials are ongoing to determine the safety and effectiveness of these drugs for Covid-19, there are known side-effects of these medications that should be considered,” the FDA commissioner, Stephen Hahn, said in a statement then.

The FDA has not updated that guidance. Experts warned that Trump’s claim to be taking the drug could lead to a spike in demand, potentially making it harder for vulnerable patients who need the drug to fill prescriptions.

After Trump hyped the drug in March, an Arizona man died from ingesting a form of chloroquine used to clean fish tanks.

“We saw Trump on TV – every channel – and all of his buddies said that this was safe,” the man’s wife, who also ingested the drug, told NBC. “Trump kept saying it was basically pretty much a cure.”

On Monday night a Fox News host, Neil Cavuto, expressed his concern, telling viewers: “I only make this not to make a political point here, but a life-and-death point. Be very, very careful.”

Fox News opinion hosts Laura Ingraham, Tucker Carlson and Sean Hannity swung behind the president but Trump was angered nonetheless, retweeting one Twitter user who called Cavuto an “asshole”. He also bemoaned the network’s output since the departure of Roger Ailes, who resigned as chairman and CEO in disgrace, after being credibly accused of sexual harassment. Ailes died in 2017.

Hydroxychloroquine, Trump and Covid-19: what you need to know

Last month, Trump, who has refused to wear a mask as a basic prophylactic measure against the virus’s spread, riffed from the White House podium that “powerful light” and “disinfectant” could be potential Covid-19 treatments.

“Suppose that we hit the body with a tremendous, whether it’s ultraviolet or just very powerful light,” he said, adding: “Supposing you brought the light inside the body, which you can do either through the skin or in some other way.

“And then I see the disinfectant where it knocks it out in a minute – one minute – and is there a way we can do something like that by injection inside, or almost a cleaning?”

Those comments coincided with a spike in calls to poison control centers and prompted US disinfectant manufacturers to issue warnings that their products should not be ingested.