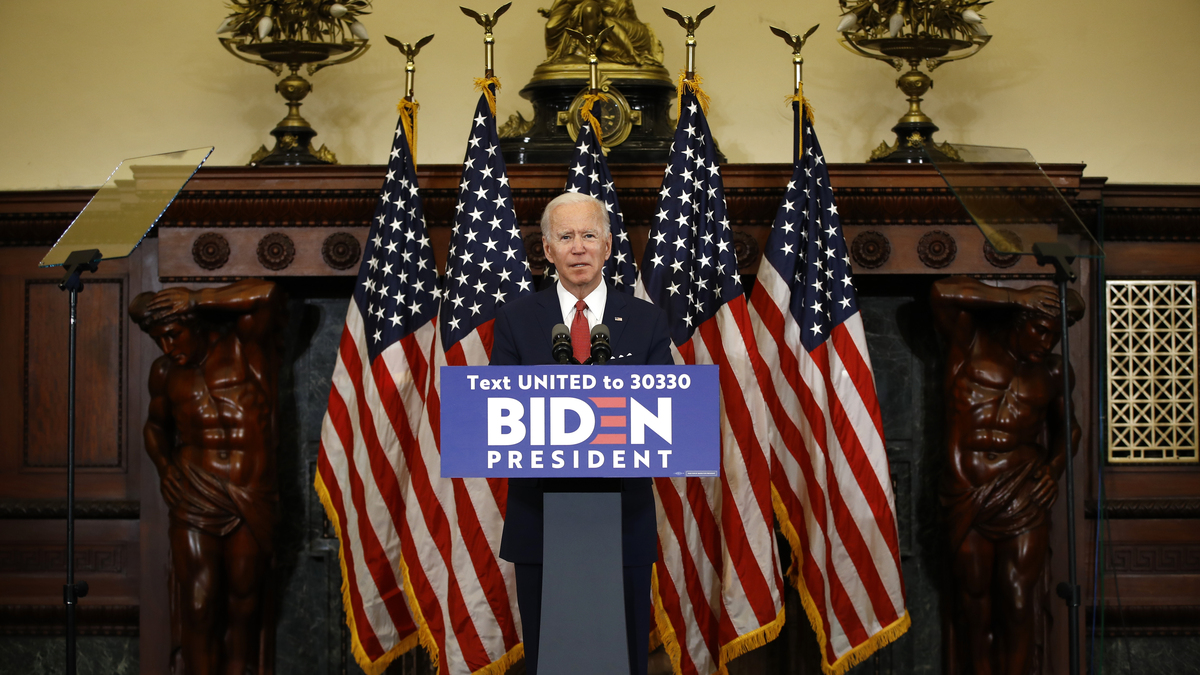 “When peaceful protesters are dispersed by the order of the president from the doorstep of the people’s house, the White House — using tear gas and flash grenades — in order to stage a photo op at a noble church, we can be forgiven for believing that the president is more interested in power than in principle,” Biden said. “More interested in serving the passions of his base than the needs of the people in his care. For that’s what the presidency is: the duty to care — to care for all of us.”

On Monday evening, Trump walked from the White House across Lafayette Square to hold a Bible in front of St. John’s Church, after peaceful protesters were forcefully cleared from the park. (The U.S. Park Police say they used smoke canisters, not tear gas, though it’s not clear if another law enforcement agency engaged there used other munitions.)

The forceful dispersal began before Washington, D.C.’s curfew had begun, and the bishop overseeing the church has harshly criticized Trump for appearing for photos without praying or addressing the racial issues at the heart of nationwide protests.

Trump made the trip after making a speech in which he threatened to deploy the military to states and cities that do not quell violence.

“The president held up the Bible at St. John’s Church yesterday. I just wish he opened it once in a while instead of brandishing it,” Biden said. “If he opened it, he could have learned something: that we are all called to love one another as we love ourselves. It’s really hard work, but it’s the work of America. Donald Trump isn’t interested in doing that work.”

Biden echoed the words spoken by George Floyd, the black man whose death while in custody of Minneapolis police has led to the widespread unrest. The words “I can’t breathe,” Biden said, “are a wake-up call for our nation.”

Biden addressed police abuses and economic disparities that affect what he called “communities that have had a knee on their neck for a long time” — alluding to the since-charged police officer who had his knee on Floyd’s neck before he died.

“The moment has come for our nation to deal with systemic racism,” Biden, the presumptive Democratic presidential nominee, said.

He asked Congress to take up measures he called “a down-payment on what is long overdue,” including police reform bills outlawing chokeholds, banning the transfer of military weapons to police forces, and establishing a uniform use of force standard. He said he would create a police oversight commission in his first 100 days as president.

Biden also called for expanding the Affordable Care Act to millions more Americans, saying that Trump, who has long opposed the law, is “consumed with his blinding ego when it comes to [former President] Barack Obama.”

Obama’s former vice president reiterated what he’s long said on the 2020 campaign trail, that there is a “battle for the soul of America.”

“Donald Trump has turned this country into a battlefield driven by old resentments and fresh fears,” Biden said. “He thinks division helps him. His narcissism has become more important than the nation’s well-being that he leads.

“The presidency is a big job. Nobody will get everything right. And I won’t either,” Biden said. “But I promise you this. I won’t traffic in fear and division. I won’t fan the flames of hate.”

In a statement following his remarks, Katrina Pierson, a Trump campaign adviser, said Biden has “obviously made the crass political calculation that unrest in America is a benefit to his candidacy.” She added: “Over the course of his public life, Joe Biden has used the politics of racial division when they suited his needs and he is doing it again.”

On Monday, Biden held his first in-person campaign event since the coronavirus took hold in the United States in mid-March. He met with African American faith leaders in Wilmington, Del., listening to at-times critical feedback from the group.

Many of the invited guests chided Biden for a political system that has delivered “hopelessness” to young African Americans. They told him the Obama administration had not done enough to economically lift black Americans, something Biden then promised would be a centerpiece of any recovery plan from the administration.