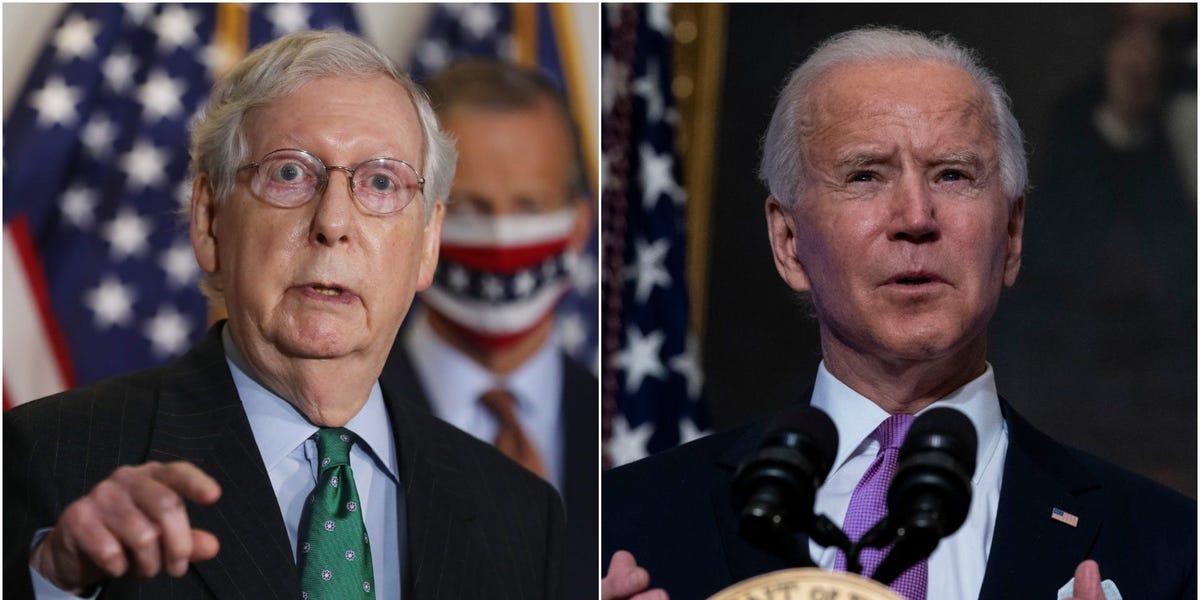 A new fight over the debt ceiling is brewing on Capitol Hill.

Senate Minority Leader Mitch McConnell has firmly dug in on refusing GOP help to renew the US’s ability to pay off its bills, known as the debt ceiling. Instead, the Kentucky Republican said it’s up to Democrats to raise it in order to finance their social spending plans on healthcare, education, and childcare. He insists he’s not “bluffing.”

But the conundrum could have a coin-sized solution. A loophole in the law that prescribes the types of coins that can legally be minted in the US theoretically allows the Treasury Department to mint a $1 trillion platinum coin, deposit it at the Federal Reserve , and then continue paying its bills as normal.

The deal with the debt ceiling

The debt ceiling places a fixed limit on the total amount of money the Treasury Department can borrow in order to fund government activities, and Congress has to vote to either raise or suspend that limit from time to time as the federal debt grows ever larger.

The Biden administration and Democrats are pressuring Republicans to back down, ruling out raising the debt limit on their own and reminding the GOP they played a role racking up $8 trillion in new debt under the Trump administration. There’s no clear path out for lawmakers as they confront a barrage of deadlines this month, including another spending brawl that could end in a government shutdown.

Former President Barack Obama said in a 2017 interview with Crooked Media that senior officials had considered minting a coin to stave off a potentially catastrophic default.

“We were having these conversations with Jack Lew and others about what options in fact were available, because it had never happened before,” Obama said, referring to the treasury secretary at the time. “There were all kinds of wacky ideas about how potentially you could have this massive coin.”

The huge conundrum with a coin-sized solution

The debt ceiling sets up a frustrating conundrum: Congress can pass budgets that direct the government to spend a fixed amount of money across its departments and programs, and sets tax rates at particular levels to fund some of it. The gap between Congressionally mandated spending and Congressionally mandated revenues then needs to be paid for by borrowing money.

But, the debt limit requires yet another act of Congress to authorize the Treasury Department to actually borrow the money needed to pay for the spending lawmakers already authorized.

This causes a problem once the department hits that debt limit, as it did at the end of July. While the Treasury Secretary has a bit of leeway to use “extraordinary measures” to keep paying the bills for a few months using cash on hand and shuffling money around, that only works for so long. It may exhaust those abilities sometime in mid-October.

Actually reaching a point where the US government is no longer able to meet its obligations would likely be a financial and economic calamity. A default on existing US debt would send financial markets into chaos, and government payments ranging from Social Security checks to military paychecks could abruptly halt. The White House is also warning about potential cuts for programs at the state and local level like Medicaid.

This isn’t the first time Congress and the president have had a showdown over the debt limit.

In the Obama era, several economists and commenters noted a potential workaround to the debt limit. The law that governs the types of coins that the Treasury Department is legally allowed to mint includes descriptions of typical coins like dimes, nickels, and quarters, as well as special commemorative and collectors’ coins, like a palladium $25 coin.

The law includes this clause: “The Secretary may mint and issue platinum bullion coins and proof platinum coins in accordance with such specifications, designs, varieties, quantities, denominations, and inscriptions as the Secretary, in the Secretary’s discretion, may prescribe from time to time.”

That clause leaves it up to the Treasury Secretary to decide on the denomination for a platinum coin, meaning in theory, Yellen could carve out the amount required and Congress could get on with more pressing business.

Of course, Treasury officials have long ruled out using the trillion-dollar platinum coin as a solution to the debt ceiling, arguing that Congress should do its job and raise the ceiling itself.