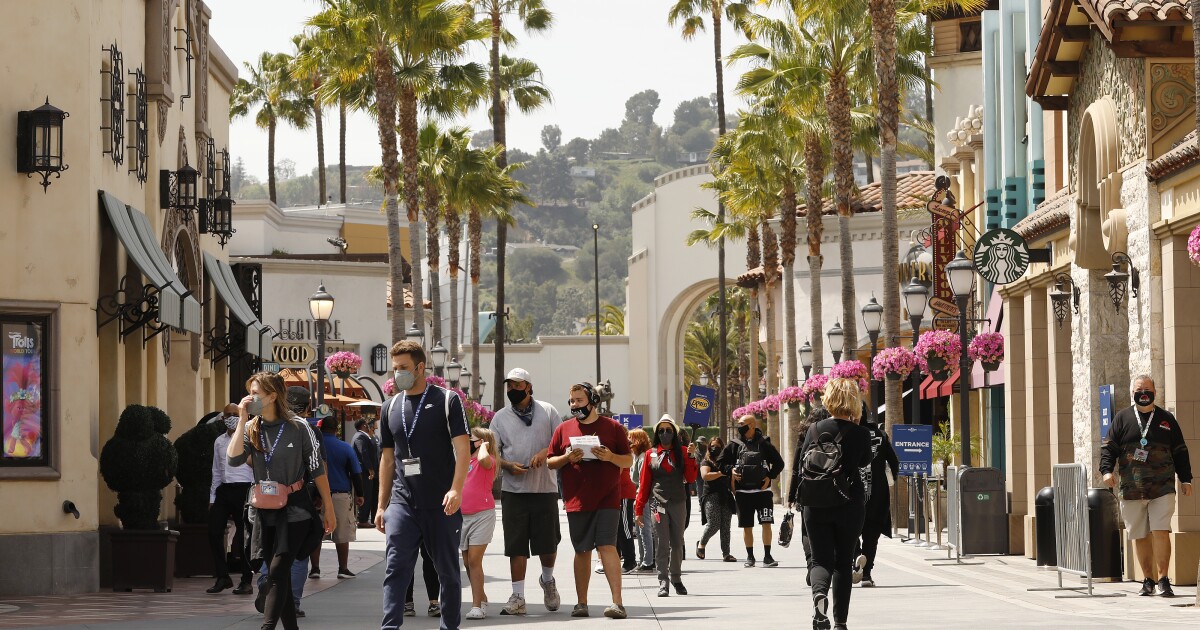 Los Angeles County’s road to COVID-19 recovery has been anything but smooth.

The region’s economy — like the rest of the world’s — ground to a halt last spring, when officials imposed sweeping restrictions after confirming the early embers of what would become a raging pandemic.

Things got moving somewhat a few weeks and a flatter curve later, only for the arrival of a summer surge to once again put the brakes on.

Another round of reopenings was abandoned in the fall, when what would prove to be the worst wave of COVID-19 yet roared to life.

But, despite the fits and starts that have typified the region’s journey over the last 14 months, this time feels different.

L.A. County on Tuesday progressed into the least restrictive, yellow tier of California’s reopening system — clearing the way for the nation’s most populous county to unshackle its economy to the widest extent currently possible.

A swath of businesses and venues, including gyms, movie theaters, amusement parks, stadiums and museums, can operate at higher capacity starting later this week.

Some of the last indoor spaces that had yet to be cleared for reopening, including bars that don’t serve meals, saunas and steam rooms, will be able to do so.

Getting to this point is the culmination of months of progress in driving down the numbers of new COVID-19 infections, hospitalizations and deaths.

And, notably, those numbers have all continued to slide even as the county has gradually progressed through the state’s reopening roadmap — sparking hope that, unlike earlier in the pandemic, L.A. won’t have to pull a U-turn this time.

In a statement, the county Board of Supervisors said reaching the yellow tier “matches the sunny optimism of the season. Now it’s up to all of us to keep up the good work.”

L.A. Mayor Eric Garcetti echoed the sentiment, saying the progression “is a tribute to everything Angelenos have done to stay safe, stop the spread, and defeat COVID-19.”

“Our sacrifices have gotten us to a promising point in the life of this pandemic, but we know for a fact that continued momentum for our businesses, workforce, families and communities depends on us remaining vigilant, following public health guidelines, rolling up our sleeves and getting vaccinated as soon as possible,” he said in a written statement Tuesday.

While the state’s tier assignments set the floor of what’s allowed, counties have the power to impose additional restrictions — something L.A. County has periodically done throughout the pandemic.

During a briefing Monday, though, Public Health Director Barbara Ferrer said the county would “be aligning fairly significantly with the direction the state is moving.”

“We’re just going to want to make sure that wherever you’re going, you can always keep distance of at least six feet from others, that everyone is always wearing their masks appropriately — with the exception of vaccinated people and a handful of … activities — and that infection control is still apparent everywhere that people are going to be where they’re intermingling,” she said. “So we still have to protect our workers. We still have to protect children.”

Ferrer said the county plans to issue a health order pertaining to the wider reopenings Wednesday that will go into effect Thursday.

What tier a county is placed in hinges on three metrics: its rate of new coronavirus cases, adjusted based on the number of tests performed; the rate at which conducted tests come back positive; and a health-equity metric applied to ensure that the positive test rate in poorer communities is not significantly higher than the county’s overall figure.

Counties must record two consecutive weeks of qualifying data to advance to a less restrictive tier and have to stay in a tier at least three weeks before moving again.

California is aiming to scrap the tier framework and fully reopen its economy on June 15, as long as vaccine supply is stable and hospitalization numbers stay low, though some safety rules will remain in place.

In the meantime, however, reaching the yellow tier requires an adjusted daily new case rate of fewer than 2 per 100,000 people, overall test positivity of less than 2% and a health-equity positivity of below 2.2%.

L.A. County’s test positivity has been within the yellow range for about a month, but only last week did its adjusted case rate finally fall below the necessary threshold.

Even so, at 1.9, the rate was just barely in the qualifying range — with even a slight regression threatening to delay its advancement.

But the county’s adjusted case rate instead fell further, to 1.6, according to state data released Tuesday.

“We’ve done a really decent job holding our own if you look at our case numbers,” Ferrer said. “And people are really invested, I think, at this point in seeing our recovery move forward.”

Liu said he has reasons for optimism. At the worst point in the pandemic, occupancy at L.A. hotels fell below 20%, he said. That figure has already topped 50% and is on track to approach 70% by mid-2022, he added.

In addition, the L.A. Tourism and Convention Board, a nonprofit group that markets the city, has begun running ads with the message “Start Your Comeback” in 20 national media markets, according to Liu.

“There is pent-up demand for travel. More than two-thirds of Americans say they plan on traveling this summer,” Liu said. “Things are really reopening, like Universal Studios and the museums.”

Jessica Lall, president and chief executive of the Central City Assn., said she has received reports of sharply increased business at the J.W. Marriott hotel at L.A. Live. Staples Center is already attracting fans and the the Broad museum is set to reopen later this month.

“This is a huge moment for the city and downtown in particular,” Lall said. “Downtown has the opportunity to play an outsized role in the recovery of the city.”

Garcetti unveiled a handful of programs for speeding up the pandemic recovery last month, calling for nearly $2 million to help restaurants set up permanent outdoor dining locations and the suspension of valet and off-site parking requirements.

The mayor’s latest budget also calls for City Hall to give out “Comeback Checks” of $5,000 to 5,000 businesses. That $25-million program will be focused on neighborhoods hit hardest by COVID-19, such as South L.A. and the northeast San Fernando Valley, Garcetti said.

Moving to the yellow tier doesn’t mean things will automatically accelerate toward business as usual, however.

Maria Salinas, president and chief executive of the Los Angeles Area Chamber of Commerce, said businesses would be creating “a new normal.”

“We’re going to emerge into a different kind of economy that I believe is going to be much more flexible,” she said. “We see that everywhere, in every industry — rethinking how they use technology, how they sell their products, how they’re communicating with their workforce.”

Salinas said local businesses are pursuing “hybrid methods” of returning to the office that give people more flexibility and hammering out safety protocols.

For both workers and customers, she said, “you can have all the safety measures in place, but part of what is going to make it is the psyche of feeling comfortable walking into a space.”

Stuart Waldman, president of the Valley Industry and Commerce Assn., said he has checked in with more than 100 of his group’s members over the past three months.

For now, he said, it doesn’t appear that people are “quite ready yet mentally to come back to the office full force.”

After more than a year of rollercoaster lockdowns, however, the move to the yellow tier made little difference to Shella Garcia, who has owned the children’s clothing shop Sweet Threads in Long Beach’s Belmont Shore for four years.

“It’s a regular Tuesday,” Garcia said with a shrug.

A few months ago, Garcia was only allowing three customers in the store at a time, keeping others out with a rope strung across the front door. Then she began permitting up to six.

About two weeks ago, she took down the rope altogether.

“Honestly we feel safe enough where we can take down the rope,” Garcia said, attributing the sentiment to lower positive case rates and more vaccines.

Plus, after running a small business through a pandemic, she said she’s gotten the hang of things.

“We just know what to do now,” Garcia said.

Her coworker, Jaimie Lor, said that while local patronage hasn’t quite returned to normal, she’s noticed a slight influx in visitors from out-of-state. Garcia agreed — she went out of town herself recently.

“With the lifting of restrictions, I definitely want to get out,” Garcia said. “Hopefully that will bring business here.”

Since the recent reopenings, Simmzy’s restaurant in Belmont Shore has experienced its highest sales ever — even since before the pandemic, according to manager Rachel Gerdeman.

With the county now in the yellow tier, the Simmzy’s — one of three surviving locations in a chain that was once five restaurants — will soon be able to reopen its countertop bar.

Getting to this point has been painful, though. Many employees were furloughed last year, some of them twice.

With the uptick in business, Gerdeman said the restaurant industry faces a major challenge: a shortage of workers.

Gerdeman thinks some people probably decided to change careers after the first wave of lockdowns.

“Now they don’t want to come back to restaurants,” she said.

At Ronan, a restaurant on Melrose Avenue, business has been increasing week by week, said owner Caitlin Cutler.

The latest health order, she said, means the restaurant can have 20 seats indoors, up from 16, in addition to the ones that are currently on the patio and in the parking lot.

To have the restaurant’s receipts growing, and seeing people eating indoors, is “really rewarding,” she said.

“That’s part of why you work in a restaurant — having regular customers, seeing people come back, having them celebrate birthdays, anniversaries and graduations,” she said. “For a year we put food in a box and just sent it out with a stranger.”

L.A. County is one of only seven counties to have climbed to the final rung of California’s reopening ladder.

Before this week, only four of the state’s 58 counties — Alpine, Sierra, Lassen and Mendocino — had made it that far.

But the yellow club has since almost doubled in size, with L.A., San Francisco and Trinity counties all advancing this week.

Thirty-nine counties are now in the orange tier, the second-most-lenient category of California’s four-tier, color-coded reopening blueprint, and 12 counties are in the stricter red tier. No parts of the state are currently in the most restrictive purple tier.

California as a whole has seen a dramatic decline in coronavirus cases and hospitalizations in the aftermath of the fall-and-winter wave that wreaked havoc statewide.

Over the last week, the state has reported an average of 1,760 new cases per day, a 25% decrease from two weeks ago, according to data compiled by The Times.

The number of coronavirus-positive patients in California’s hospitals — which topped 21,000 at the peak of the surge — had fallen to 1,626 as of Sunday.

And the state has seen a similarly precipitous plunge in deaths. Over the last week, an average of 66 Californians a day have died from COVID-19 — a fraction of the hundreds a day seen during the height of the last spike.

Public health officials and experts say California’s progress is proof of the power of the COVID-19 vaccines, which are now available to everyone 16 years and older.

Roughly half of all Californians, and 63% of adults, have received at least one vaccine dose to date, according to data from the Centers for Disease Control and Prevention.

However, only 32% of residents, and 41% of adults, are considered fully vaccinated — meaning they either received the single-shot Johnson & Johnson vaccine or both required doses of the Pfizer-BioNTech or Moderna vaccines.

Officials have also seen the demand for shots tail off as of late.

“At this point, the goal is for us to make it as easy as possible for people to come in and feel comfortable getting their vaccine,” Ferrer said.