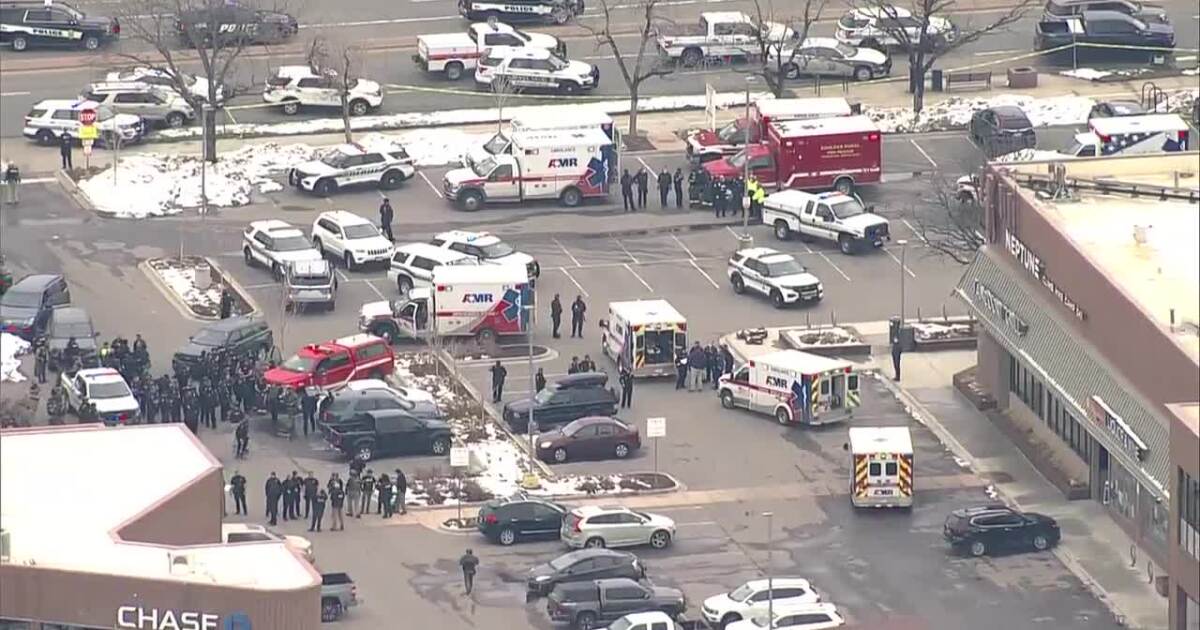 DENVER — Multiple law enforcement officials have confirmed at least six people are dead, including one Boulder Police officer, in a shooting at the King Soopers on Table Mesa Drive.

The shooting happened after 2:30 p.m. and police arrived within minutes of initial 911 calls. State law enforcement officials said when they arrived at the scene, a suspect opened fire on them.

During a press conference that began around 6:50 p.m., law enforcement and investigators released limited information. They did not confirm how many people were killed or hurt, but they did say the suspect has been taken into custody and there is no longer a threat to the public.

Officials confirmed the suspect went to the hospital. They say he is the only person injured that they’re aware of and they know of no other serious injuries at this point.

Boulder Community Health confirmed they have one patient and would not be receiving any additional patients. It’s unclear if the suspect is the patient.

Investigators said they could not provide information on a possible motive.

Watch live coverage as the situation unfolds in the video player below.


AirTracker7 said three medevac helicopters were called in and were landing at Fairview High School. Video from the scene showed one man with a bloody leg being led away from the store in handcuffs and being loaded into an ambulance. Police would not confirm if he was the suspect.

Many police officers from different agencies have responded to the scene and are telling people to avoid the area of the King Soopers.

The Boulder Valley School District says Boulder High is currently on SECURE-Lockout, which means any students on campus will stay inside due to police activity. It says no one should come to the area at this time. Students and coaches part of athletic teams were at Boulder High School when they were alerted of police responding to a situation in the neighborhood nearby. They are all safe and waiting for an all-clear.

The Boulder Police Department also sent out an emergency notification for people in the area of 17th Street and Grove Street to shelter in place for a report of an armed, dangerous individual potentially connected to the King Soopers situation. The shelter in place was lifted at 6:41 p.m. and investigators later confirmed it was unrelated.

Andrew Hummel was in the store at the time of the shooting when he said he heard a loud bang and everyone began sprinting toward the back of the store. He was able to get out safely. He says he heard multiple gunshots while he was inside.

“I pray that everybody impacted by this is doing all right,” Hummel said.

Hummel’s friend and roommate, Mason, works at the King Soopers. He is also OK, but Hummel said his friend texted that he didn’t know if he’d make it out alive.

“One of the biggest like scary texts he sent, he just said ‘I love you guys. Thank you for everything in case things go bad.’ That was a really hard text, especially me being in this situation. That was something I would never want to hear from any of my friends. Because I knew the seriousness of what was going on. It was horrifying. It was truly horrifying,” Hummel said.

A King Soopers employee in Boulder, Andy Arellano, grabbed his phone and started dialing 911 as the shots were getting closer. His manager said to go into the back door.

“There’s never another time I’ve like had this situation before, you know? Not many have,” Arellano said.

Sarah Moonshadow lives just a mile away has been coming to the King Soopers daily for a while. She and her 21-year-old son, Nick, heard the gunshots and got down. She said she heard multiple gunshots. The two started running to leave the store. On the way out, Moonshadow said she saw an older man laying in the street.

“There was a guy laying out in the street as soon as we got outside. And I started running toward him to try to help him, and my son said, ‘No, we can’t help him. We’ve gotta go’” Moonshadow said.

She said she wanted to stop, but she needed to keep to running because they were still too close and they didn’t know if the shooter was following them.

The FBI Denver said the Boulder Police Department has requested they assist with the investigation.

At the request of the Boulder Police Department, FBI Denver personnel are assisting with an investigation into an active shooter situation at a King Soopers grocery store on Table Mesa Drive in Boulder.

Following the shooting, King Soopers released the below statement:

We are horrified and deeply saddened by the senseless violence that occurred at our King Soopers store located on Table Mesa Drive in Boulder, CO.

The entire King Soopers family offers our thoughts, prayers and support to our associates, customers, and the first responders who so bravely responded to this tragic situation.

We will continue to cooperate with local law enforcement and our store will remain closed during the police investigation.

To protect the integrity of the ongoing investigation, we are referring questions to the Boulder Police Department.

Gov. Jared Polis said in a tweet, “My prayers are with our fellow Coloradans in this time of sadness and grief as we learn more about the extent of the tragedy.”

Like my fellow Coloradans, I am closely watching unfolding events at King Soopers in Boulder. My prayers are with our fellow Coloradans in this time of sadness and grief as we learn more about the extent of the tragedy.

Polis has since released the below statement:

“My heart is breaking as we watch this unspeakable event unfold in our Boulder community. We are making every public safety resource available to assist the Boulder County Sheriff’s Department as they work to secure the store. I’m incredibly grateful to the brave men and women who have responded to the scene to help the victims of this senseless tragedy. This is very much an active situation and we continue to monitor very closely. We ask for your patience as law enforcement works tirelessly to secure the site. Right now, the biggest priority is to let local law enforcement and the City of Boulder do their work to ensure the safety of those involved.”

Attorney General Merrick Garland has been briefed on the shooting, a DOJ official told ABC News. Jen Psaki, President Joe Biden’s press secretary, has also been briefed and being kept up to date by his team on additional developments.

Local 7 is closely monitoring the unfolding events at King Sooper #33 in #BoulderColorado. We are praying that all the #grocery workers and shoppers today – including our 32 members that work at this store—are safe and unharmed.

The University of Colorado Boulder has canceled classes beginning 5:30 p.m. or later due to the ongoing police situation.

CU Alert 3: Classes beginning at 5:30 p.m. and later are canceled due to an ongoing police situation off campus. Visit https://t.co/VBGm0DszAh for updates.

Anyone who witnessed anything is asked to call the Boulder Police Department at (303) 441-3333.

This is a developing news story and will be updated.