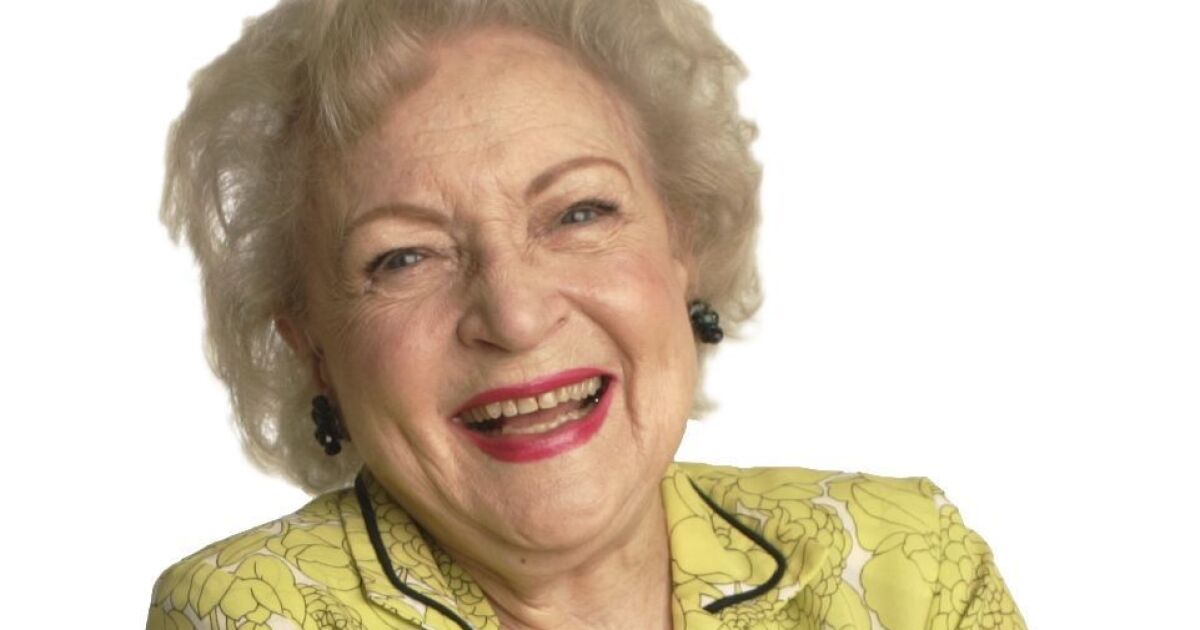 White, who was the last surviving star of television’s “The Golden Girls,” died overnight in Brentwood, her friend and agent Jeff Witjas told the Washington Post. She was 99.

For decades, White had been best known for the characters she played in a pair of long-running TV series — the conniving “happy homemaker” Sue Ann Nivens on “The Mary Tyler Moore Show” in the 1970s and daffy Rose Nylund on “The Golden Girls” in the 1980s and early 1990s. She received Emmy Awards for both roles.

But a scene-stealing movie part as a kooky grandmother in the 2009 summer hit “The Proposal,” and a string of TV appearances that followed helped transform her into America’s favorite working comedian in her 80s and beyond.

“I’m not new to live TV,” the 88-year-old White reminded America on “Saturday Night Live” as she became the oldest person to host the late-night comedy show, in May 2010. She recalled that she had starred in a sitcom, “Life With Elizabeth,” which aired live from 1953 to 1955.

“Of course, back then, we didn’t want to do it live,” she said. “We just didn’t know how to tape things.” Then, a perfectly timed beat and the punch line: “So I don’t know what this show’s excuse is.”

Her Emmy-winning turn as the host of “Saturday Night Live” was a result of a Facebook campaign that started after she appeared in an irreverent Snickers ad that debuted during the 2010 Super Bowl.

In the commercial, she is clobbered in a pick-up football game when a player huffs: “You’re playing like Betty White out there!”

“That’s not what your girlfriend says,” she retorts, playing off her sweet yet salty image.

Since 2010, she had starred as a cranky yet cheeky housekeeper in a sitcom for TV Land, “Hot in Cleveland,” a role she embraced at age 88 ½. She followed that by publishing her third memoir, and hosting NBC’s “Betty White’s Off Their Rockers,” a hidden-camera show that featured elderly pranksters. In 2018, when PBS announced it was pulling together a documentary on White, she found herself trending on Twitter.

At an age most actors have settled into retirement, White was suddenly TV’s go-to guest star.

In television’s infancy, White was a rarity — a woman who had creative control in front of and behind the camera, according to the Paley Center for Media.

Three years after participating in a 1949 test of TV transmission, White formed a company, Bandy Productions, that produced her syndicated early 1950s sitcom “Life With Elizabeth” and the shorter-lived domestic comedy that followed on ABC, “Date with the Angels.”

Frustrated with her early experiences with series television, White turned to a then-popular genre, game shows, and was a regular on such staples as “Match Game PM” and “Password,” hosted by Allen Ludden, whom she married in 1963.

She was also a frequent, quotable presence on talk shows that stretched from Jack Paar’s late-night program in the 1950s to “Jimmy Kimmel Live!” in 2011 and again in 2015.

In her earlier appearance on Kimmel, the host asked White who’d driven her to the studio. She said she’d driven herself to the set.

“I’ve been driving since I was 4. No, no, no. That was something else,” she told Kimmel. “That’s when I lost my virginity.”

Recognized in early 2010 with a Screen Actors Guild Life Achievement Award, White called the honor “the highest point” of her professional life — and sprinkled her speech with bawdy asides.

Although her career did have a resurgence, she never really went away after “The Golden Girls” left the air in 1992 after seven years.

She regularly guest-starred on TV shows and had recurring roles on a number of them, including — in her 80s — “Boston Legal” and the soap opera “The Bold and the Beautiful.”

When she guest-starred as a slightly mad version of herself on “The John Larroquette Show,” White won another Emmy, in 1996.

“Betty White has logged more hours on television, I think, than any other human being,” her longtime friend Mary Tyler Moore said in a 2001 interview.

With her bright blue eyes, dimpled cheeks and wide smile framed by a heart-shaped face, White was often cast as the sweet-tempered sparring partner in many domestic comedies — a type she later slyly played against on “The Mary Tyler Moore Show” on CBS.

In 1973, she was hired for a one-shot guest appearance as Sue Ann, the sex-crazed cooking show host, in the fourth season of “The Mary Tyler Moore Show.” She stayed until 1977, the rest of the show’s run.

“She created one of the great television characters in situation comedy history,” Moore said during a 90th birthday salute to White that aired in January on NBC.

When Moore died in early 2017, White said that she considered her time with the late actress and others on the sitcom to be “the best times of my life.”

Ed Asner, who co-starred on “The Mary Tyler Moore Show,” told The Times in 1999 that White thrived as a comic actress because “she has a wicked sense of humor” and went to great lengths to wring humor out of “the simplest of statements.”

For White, portraying the calculating Sue Ann “was like being born again,” she once told TV Guide.

When NBC launched “The Golden Girls” in 1985, White portrayed the clueless yet sweet Rose, one of four elderly single women who lived together in Miami in a show that went on to be a long-running hit.

She was originally cast in the part of man-hungry Blanche Devereaux with Rue McClanahan set to portray Rose. But Jay Sandrich, the veteran director of “The Mary Tyler Moore Show” who helmed the pilot, worried that viewers would think “she’s Sue Ann in another guise,” White told The Times in 2009.

After the actresses switched roles, Sandrich advised White to play Rose not as dumb but as a naïve and trusting foil to Blanche and the other two characters, Dorothy (Bea Arthur) and Dorothy’s mother, Sophia (Estelle Getty), whose slight stroke hilariously loosened her tongue.

White’s mischievous willingness to go against the grain was central to her long career, said Melissa Camacho, a professor of television and media studies at San Francisco State University.

“You look at Betty White, and you don’t see an age. She carries herself with such a youthful spark,” Camacho said in 2010 in the Calgary Herald. “And she’s not afraid to get in there and play.”

Betty Marion White was born Jan. 17, 1922, in Oak Park, Ill., the only child of Horace White, a traveling salesman and electrical engineer, and his wife, Tess. Her fun-loving parents cultivated her wit from an early age, White said.

As a child, she moved to Beverly Hills with her family and became interested in acting at Beverly Hills High School, where she graduated in 1939.

Professionally, she debuted onstage at Bliss Hayden Little Theatre in Beverly Hills and soon moved into radio and TV.

In 1949, White co-hosted a local live television variety program with early TV personality Al Jarvis that ran more than five hours a day, six days a week. The show, “Hollywood on Television,” included songs, skits and live commercials; she once did 58 commercials in a single day.

It was “like going to television college,” White told The Times in 2010.

Over the years, she also starred in several TV programs titled “The Betty White Show” — the first a 1950s variety show and the last a sitcom in 1977-78.

While on “Password,” she got to know the bespectacled, crew-cut-wearing Ludden, then a recent widower with three children. They were married for 18 years before Ludden died of cancer at 63 in 1981. She never married again.

Almost 20 years later, her eyes teared up as she talked with a reporter about Ludden at the comfortable Brentwood home that she had owned since 1968.

Her two brief earlier marriages ended in divorce. One was to a World War II soldier who took her home to an Ohio chicken farm — “a nightmare,” she later said — and the other to Lane Allen, a casting director for Universal Studios. She had no children.

Her two passions, she often said, were show business and animal activism.

Deeply committed to the welfare of animals, she had served as president of the Morris Animal Foundation, which funds research and education on animal and wildlife health. She also was a longtime trustee of the Greater Los Angeles Zoo.

She agreed to pen her latest memoir, “If You Ask Me (And Of Course You Won’t),” partly because the seven-figure publishing deal allowed her to write a second book for G.P. Putnam’s Sons about her love of zoos. She had already written two books about animals.

White appeared in about 10 films, including as a grandmother in the 2010 Walt Disney Pictures comedy “You Again” with Kristen Bell and “The Proposal” with Sandra Bullock. In the latter, The Times’ review called her performance “delightfully bizarre.” In 2019, she provided the voice of Bitey White, a toy tiger named for her, in “Toy Story 4.”

White preferred television because, as she once said, “You get in, you do it, you see it, then you move on.”

From 1970 to 1990, White hosted the Tournament of Roses Parade in Pasadena, mainly for NBC. She also hosted the Macy’s Thanksgiving Day Parade in New York City in the 1980s. In 2011, she won a Grammy Award for her audio recording of “If You Ask Me (And Of Course You Won’t).” In all, she won five Emmy awards.

“To be able to spend a lifetime in the business you love with the people you love, and get away with it, it’s just marvelous,” she said on her 90th birthday special. “I’m the luckiest old broad on two feet.”