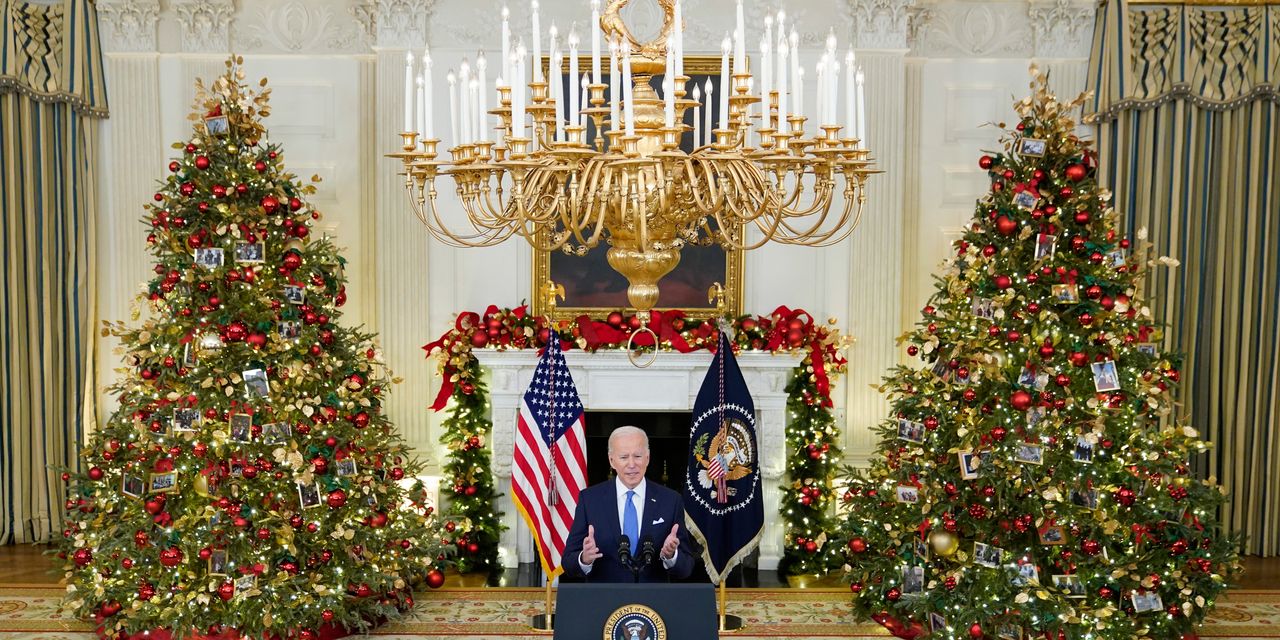 WASHINGTON—The Biden administration is preparing to distribute 500 million free at-home Covid-19 testing kits to Americans and deploy military doctors and nurses to overburdened hospitals this winter, as the Omicron variant becomes the dominant form of the virus in the U.S.

“We have to do more. We have to do better—and we will,” President Biden said at the White House on Tuesday during a speech outlining the new coronavirus-response measures.

Mr. Biden’s administration is grappling with how to publicly underscore the urgency surrounding the highly transmissible variant, while seeking to convey that the U.S. is better prepared to battle the pandemic than it was a year ago.

His remarks came as the Centers for Disease Control and Prevention said Omicron had overtaken the Delta variant of the coronavirus in the U.S., accounting for an estimated 73% of infections for the week ending Dec. 18.

Harris County Public Health in Texas on Tuesday reported the first known Covid-19 death in the county caused by the Omicron variant. The patient was an unvaccinated man between the age of 50 and 60 who had been infected with Covid-19 in the past, the agency said.

Mr. Biden stressed that Americans should take the Omicron variant seriously, but shouldn’t panic. The president told vaccinated Americans who are following public health guidelines that they should feel comfortable spending the holidays with their families. Unvaccinated Americans, however, are at much greater risk of hospitalization and death, he warned.

“If you’re not fully vaccinated, you have good reason to be concerned,” Mr. Biden said, adding that Americans have an obligation to their families and their country to get vaccinated. The president noted that former President Donald Trump recently revealed he had received a booster shot. “It may be one of the few things he and I agree on,” he said.

Even as parts of Europe have returned to previous pandemic-related restrictions including lockdowns and tightening border controls, Mr. Biden ruled out the need for shutdowns or other tough measures.

But leaders in several U.S. states and cities said they would implement tougher rules to combat the pandemic. Massachusetts issued a stronger mask advisory, while Arizona’s Pima County, which includes the city of Tucson, enacted a new mask mandate.

Chicago Mayor Lori Lightfoot said that starting Jan. 3, residents will need to show proof of vaccination to enter restaurants, bars, fitness centers and entertainment venues that serve food or drinks. And an annual New Year’s Eve celebration in downtown Los Angeles was canceled for in-person attendees, following similar steps in other cities, including Paris and London.

What steps should the administration take to combat rising coronavirus cases? Join the conversation below.

The president directed the Federal Emergency Management Agency to assess the needs of hospitals and start expanding hospital bed capacity. In addition, FEMA will prepare to deploy hundreds of ambulances and medical teams to transport patients to other facilities, if a hospital reaches capacity.

The administration has positioned supplies such as masks, gowns and ventilators around the country so they can be quickly sent to states that need them, the president said.

The administration is setting up new federal testing sites around the country, with the first opening in New York City this week. The initial delivery of at-home testing kits from the 500 million being purchased by the government will begin in January. The tests will be distributed to the public free by mail through a new website, according to the White House.

A White House official said the administration would disclose more information about the type of tests it is purchasing after the procurement is finalized. The 500 million figure is based on what manufacturing capacity can handle, the official said.

The administration will continue using the Defense Production Act, a Korean War-era national security mobilization law, to ensure that the U.S. is producing enough tests to meet soaring demand, according to the White House.

“It’s going to be all about the details: how it’s implemented, how these tests are distributed across the country, and most important, how quickly it could happen,” said Mara Aspinall, the co-founder of the Biomedical Diagnostics program at Arizona State University and board member of rapid test-maker Orasure Technologies Inc. “The concept here is great, but we have to be faster than Omicron.”

Some public health officials have criticized the Biden administration over testing shortages, noting that the U.S. lags behind other countries, including the U.K.—where people have been able to order free packs of rapid tests from the government for months or else buy them at a much cheaper price than in the U.S. On Sunday, New York City Mayor Bill de Blasio called on the White House to invoke the Defense Production Act to make more at-home tests and monoclonal antibody treatments available.

Mr. Biden on Tuesday defended his efforts to expand testing in the U.S. and rejected criticism that he hadn’t acted quickly enough. “The Omicron virus spread even more rapidly than anybody thought,” he said.

The White House had previously announced that insurance companies would in January begin reimbursing Americans with insurance for the cost of at-home tests, a proposal that will remain in place.

Get a morning briefing about the coronavirus pandemic three times a week and a weekly Health newsletter when the crisis abates.

Fast-acting, at-home rapid tests are less sensitive than laboratory-based PCR tests, but provide results in minutes and can be taken from anywhere. The tests work best when a person has a lot of virus in their system and is most likely to be contagious, leading many public health experts to dub them “contagiousness tests.”

The amount of virus in a person’s body can shoot up quickly, so public-health experts often stress that the result is relevant to that specific moment. Many have encouraged people to use the tests before gathering or traveling around the holidays, but to do so right before the event, rather than the day or night before.

Mr. Biden said on Thursday that the unvaccinated were “looking at a winter of severe illness and death.” His senior health advisers have suggested that vaccinated people, by contrast, need only take extra precautions heading into the holidays but haven’t discouraged them from carrying on with most daily activities.

For schools, the variant threatened to upend in-person instruction for the third consecutive academic year. A handful of colleges and universities reinstated remote learning because of a sharp rise in Covid-19 cases on several campuses, and some public schools have temporarily returned to virtual learning.

The Biden administration endorsed on Friday a testing strategy for K-12 students designed to keep children inside classrooms even after exposure to a confirmed Covid-19 case. That decision was the latest sign that the administration is moving away from stricter guidelines, such as mandatory quarantines, and is increasingly focused on how to live with the virus.

The rise in cases adds to the challenges facing Mr. Biden, whose approval numbers fell sharply over the summer. The president is also dealing with supply-chain logjams and inflation and was dealt a blow on Sunday when Sen. Joe Manchin (D., W.Va.) said he wouldn’t support an economic spending plan that is Mr. Biden’s top domestic priority.

However, after his speech Thursday, Mr. Biden expressed optimism that he could eventually reach a deal with Mr. Manchin, saying they “are going to get something done.”

Write to Andrew Restuccia at andrew.restuccia@wsj.com, Sabrina Siddiqui at Sabrina.Siddiqui@wsj.com and Brianna Abbott at brianna.abbott@wsj.com