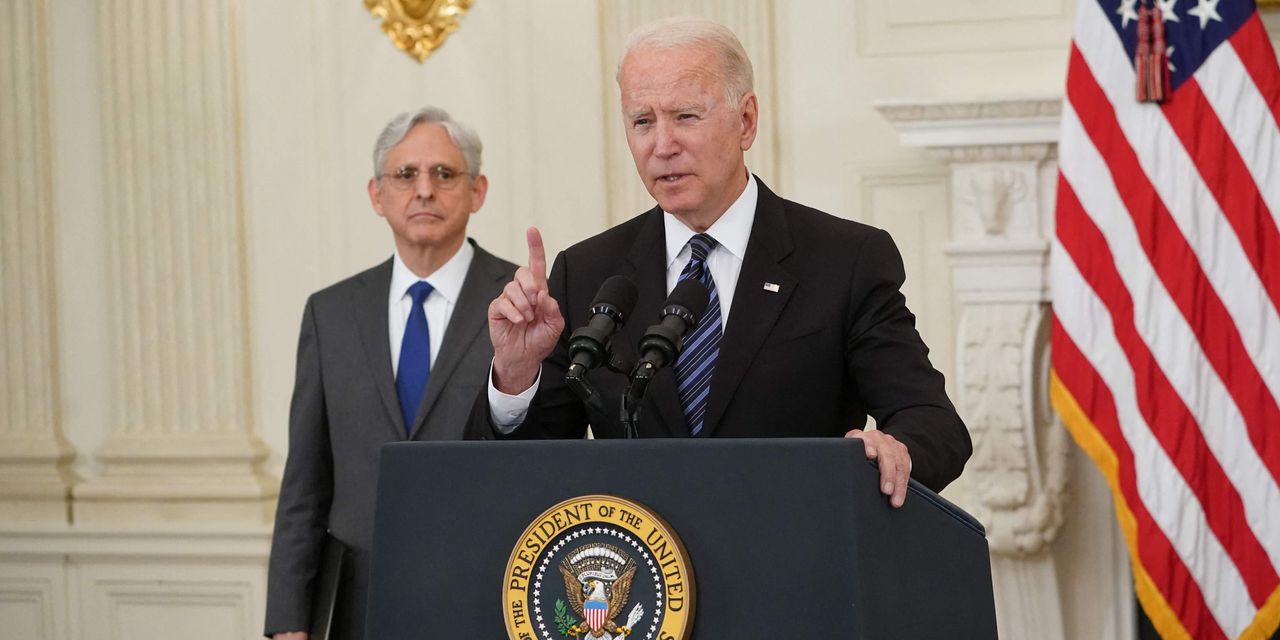 WASHINGTON—President Biden laid out his crime-prevention strategy Wednesday amid a rise in gun violence in many cities, as Republicans seek to tie the increase in crime to calls for cuts to police departments.

Mr. Biden emphasized that state and local officials in areas experiencing surges in gun violence can use $350 billion in Covid-19 relief funding to hire more law-enforcement personnel, even if it raises the total number beyond its pre-pandemic level.

They also can use that money to invest in programs that try to identify and mediate potentially violent conflicts. The administration will work with 14 cities, including Atlanta, Baltimore and Detroit, that are increasing investments in such programs, known as community violence intervention.

The Labor Department will use existing funding for summer workforce development programs for young people and will help connect formerly incarcerated people with jobs, administration officials said. The Justice Department will take additional steps to crack down on gun trafficking and revoke licenses for gun dealers who willfully violate federal law.

“We will make sure you can’t sell death and mayhem on our streets,” Mr. Biden said.

Law-enforcement officials and criminologists have said that pandemic stress and a police pullback amid last year’s protests are likely contributors to the rise in crime. In the last three months of 2020, homicides rose 32.2% in cities with populations of at least a million, according to the Federal Bureau of Investigation’s Quarterly Uniform Crime Report.

Administration officials said cities can use funds from the $1.9 trillion Covid-19 relief package passed in March for law enforcement because the administration views the rise in gun violence as a secondary impact of the pandemic. The administration had previously told cities they could use the funds to retain public employees, including police officers, but hadn’t encouraged them to add law enforcement personnel.

Republicans say Democrats haven’t responded sufficiently to the rise in crime and link it to a push by activists and some Democratic lawmakers to defund police departments following the killing of George Floyd by a Minneapolis police officer last year.

“Clearly, the Democrats own defunding the police, and so I think Republicans all across the country are going to talk about it,” said Florida Sen. Rick Scott, who leads Senate Republicans’ campaign arm.

Mr. Biden has opposed defunding police departments, resisting calls from some progressives in his party who backed Black Lives Matter activists on the issue. He called on the 2020 campaign trail for more transparency on police records, body cameras and more money for community policing. Still, strategists from both parties who worked on close races think Republicans’ focus on public safety helped the party win many suburban congressional districts in 2020, even as Mr. Biden carried the top of the ticket.

How do you think the Biden administration should approach the nation’s crime wave? Join the conversation below.

As president, Mr. Biden has encouraged bipartisan talks in Congress about potential legislation to address police misconduct, though it isn’t clear if the two sides will be able to reach an agreement. The Biden administration also announced its support Tuesday for a bipartisan bill that would work to eliminate the crack and powder cocaine sentencing disparity.

Democrats also point out that 21 House Republicans voted against honoring Capitol police officers who protected lawmakers during the pro-Trump Jan. 6 riot, while all Democrats supported it.

“The far right is trying to use law enforcement to drive a political wedge and manipulate where Democrats are,” said Rep. Josh Gottheimer (D., N.J.), the chairman of the bipartisan Problem Solvers Caucus. “But I think time has run out on that play. You can be for bipartisan-backed reforms while also standing firm with law enforcement and against crime.”

Addressing crime was contentious within the Democratic Party in the last two presidential elections. Mr. Biden as a senator helped craft the Violent Crime Control and Law Enforcement Act of 1994. The sweeping legislation included an assault weapons ban, the Violence Against Women Act and grants for states that required prisoners to serve more time by reducing parole and early release. Most congressional Democrats supported it at the time, but critics, including progressives in the party, have since faulted it for high incarceration rates among Black men.

With Covid-19 cases declining and the economic restrictions lifting, public safety has become a top concern for many Americans and local officials.

Out of the nation’s 20 largest local law-enforcement agencies, city and county leaders want funding increases for nine of the 12 departments where next year’s budgets already have been proposed.

More Americans said violent crime was a “very big problem” in the U.S. than said the same of Covid-19, according to a Yahoo News/YouGov poll of 1,588 adults released late last month. Polls in New York City’s mayoral race have shown those surveyed ranking public safety as a top concern in recent weeks, as the candidacy of Eric Adams, a former police officer, has gained momentum.

—Kristina Peterson contributed to this article.

Write to Tarini Parti at Tarini.Parti@wsj.com and Eliza Collins at eliza.collins+1@wsj.com.