President Biden announced a task force on China issues during his first trip as president to the Pentagon on Wednesday. Alex Brandon/Pool/Getty Images hide caption 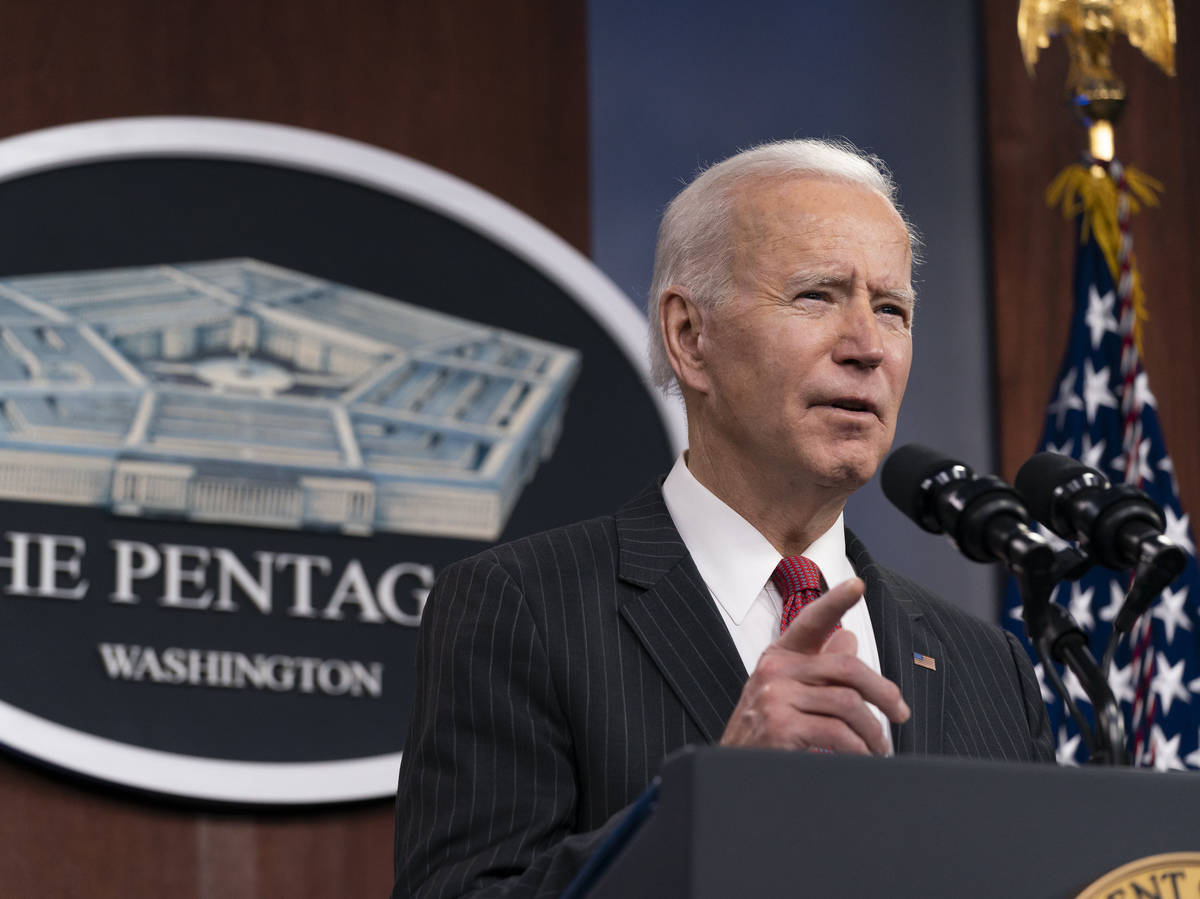 President Biden announced a task force on China issues during his first trip as president to the Pentagon on Wednesday.

President Biden held a call with Chinese President Xi Jinping on Wednesday, the White House said — the first conversation since he took office with a leader whose country poses vast economic, climate, and security challenges to the United States.

“President Biden underscored his fundamental concerns about Beijing’s coercive and unfair economic practices, crackdown in Hong Kong, human rights abuses in Xinjiang, and increasingly assertive actions in the region, including toward Taiwan,” the White House said in a statement.

The call comes after Biden and his officials did rounds of calls with allies and regional partners, signaling that the United States will depart from the former Trump administration’s go-it-alone approach to China.

Senior U.S. officials told reporters ahead of the call that Biden had been looking forward to it, and predicted the call would be “practical, hard-headed, clear- eyed and rooted in a deep familiarity with the … counterpart at the other end of the line.

Biden and Xi are not strangers, having met and spoken many times during the Obama administration. Biden often recounts how he has “traveled 17,000 miles” with Xi.

The call took place on Thursday in China, falling on Lunar New Year’s eve, the most important holiday of the year. It is a time when families traditionally gather to celebrate the end of winter and the start of spring on the lunisolar calendar.

Biden had been prepared to lay out several concerns to Xi, officials told reporters, including human rights, cybersecurity and Chinese aggression in the Indo-Pacific region. But they noted that the United States sees areas of common interest with China, including climate change.

“The two leaders also exchanged views on countering the COVID-19 pandemic, and the shared challenges of global health security, climate change, and preventing weapons proliferation,” the White House said in its statement.

The U.S.-China relationship has been on a rollercoaster in recent years. Former President Donald Trump, who tried to pressure China into changing its trade policy using tariffs, at first courted Xi and claimed to have “great chemistry” with him. But the relationship soured after the coronavirus pandemic, which Trump blamed on China. The two leaders had their final conversation in March 2020.

The Communist Party’s top foreign policy official, Yang Jiechi, told a U.S. audience earlier this month that the Biden administration should choose a different path from Trump, saying, “We need to respect each other, seek common ground while putting aside differences, keep disagreements under effective control and expand common interests.”

The Biden administration doesn’t plan to throw out all of Trump’s China policy, officials told reporters.

But Biden’s team took issue with “the way in which the Trump administration went about that competition” particularly by eschewing traditional alliances and the traditional U.S. foreign policy focus on human rights and democracy.

Biden plans to build on the Trump administration’s partnership with Japan, India and Australia under what’s known as the “Quad” — the Quadrilateral Security Dialogue.

During Biden’s first weeks in office, his officials have spoken out against China’s treatment of the Uighurs Muslim minority and other human rights issues, and called on China to step up on Myanmar’s coup. The U.S. Navy also announced a “freedom of navigation” operation in the South China Sea, the first since Biden took office.

Biden doesn’t plan to throw out Trump’s tariffs, officials said. “We believe that we have to very carefully, in consultation with allies and partners, in consultation with the Congress, work through the sources of leverage we have on the economic front and move out with a sharper, more effective trade strategy towards China off the baseline of the existing tariffs,” one of the officials said.

Biden has said he wants to refocus U.S. foreign policy by strengthening the U.S. economy and looking at what’s in the best interests of U.S. working people. Officials said key to that is investing domestically in industries like semiconductors, artificial intelligence, biotechnology and clean energy.

The call with Xi came after Biden’s first trip as president to the Pentagon, where he focused on what he called “the China challenge” during brief remarks.

Defense Secretary Lloyd Austin will take recommendations from a new task force of civilian and military experts at the Pentagon on “our strategy and operational concepts, technology, and force posture, and so much more,” Biden said. The group will do its work over the next few months, and Biden emphasized the resulting strategy will need bipartisan cooperation from the U.S. Congress as well as from allies and regional partners.

U.S. officials told reporters ahead of the Biden-Xi call that allies and partners in the region had raised fresh concerns about China’s aggressive military approach.

“We’re seeing a pattern of behavior that is creating concern among friends,” one official said, citing aggression toward Taiwan and increased military activity in the South China Sea.

Partners also expressed concern about the commitment of the United States to the region after the “America First” policy of Trump — “whether the United States will have their back,” the official said.
Source Link