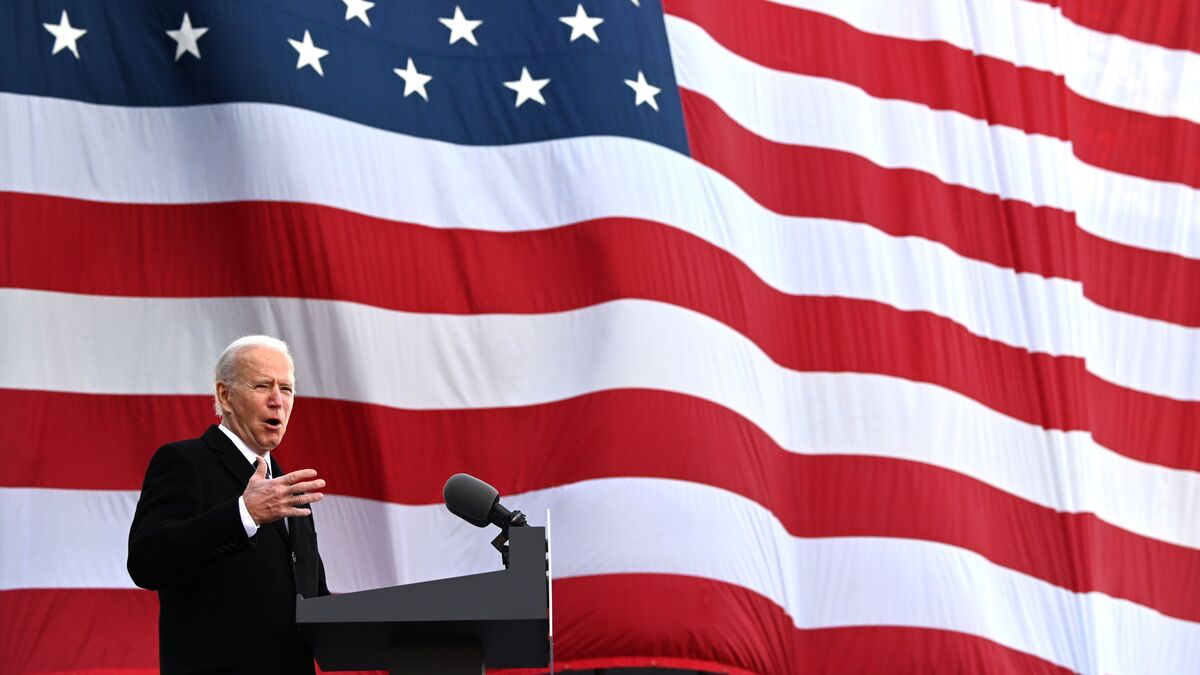 If you haven’t heard, Joe Biden would like to unite America.

It was a focus of the Democrat’s campaign. It’s even the theme of Biden’s inauguration — “America United.”

The inaugural committee says the slogan “reflects the beginning of a new national journey that restores the soul of America, brings the country together, and creates a path to a brighter future.”

If only it were that easy.

When Biden is sworn in at 12:01 p.m. ET Wednesday as the 46th president of the United States, it will be with the understanding that the country is as divided as it’s ever been, as pessimistic as it’s been in three decades and facing health, economic and racial crises.

It will also be a very different inauguration than has ever been seen in U.S. history. Four years ago, President Trump was arguing over his crowd size compared with Barack Obama’s record-setting turnout of supporters on the National Mall.

This time, because of the coronavirus pandemic and security concerns, the Mall is shut down — as is much of downtown Washington, D.C.

After the violent insurrection at the U.S. Capitol on Jan. 6 by a mob of pro-Trump supporters, the entire Capitol complex, a place that is generally open to the public, has been locked down.

Razor wire is seen last week after being installed on the fence surrounding the grounds of the U.S. Capitol due to security threats. Samuel Corum/Getty Images hide caption 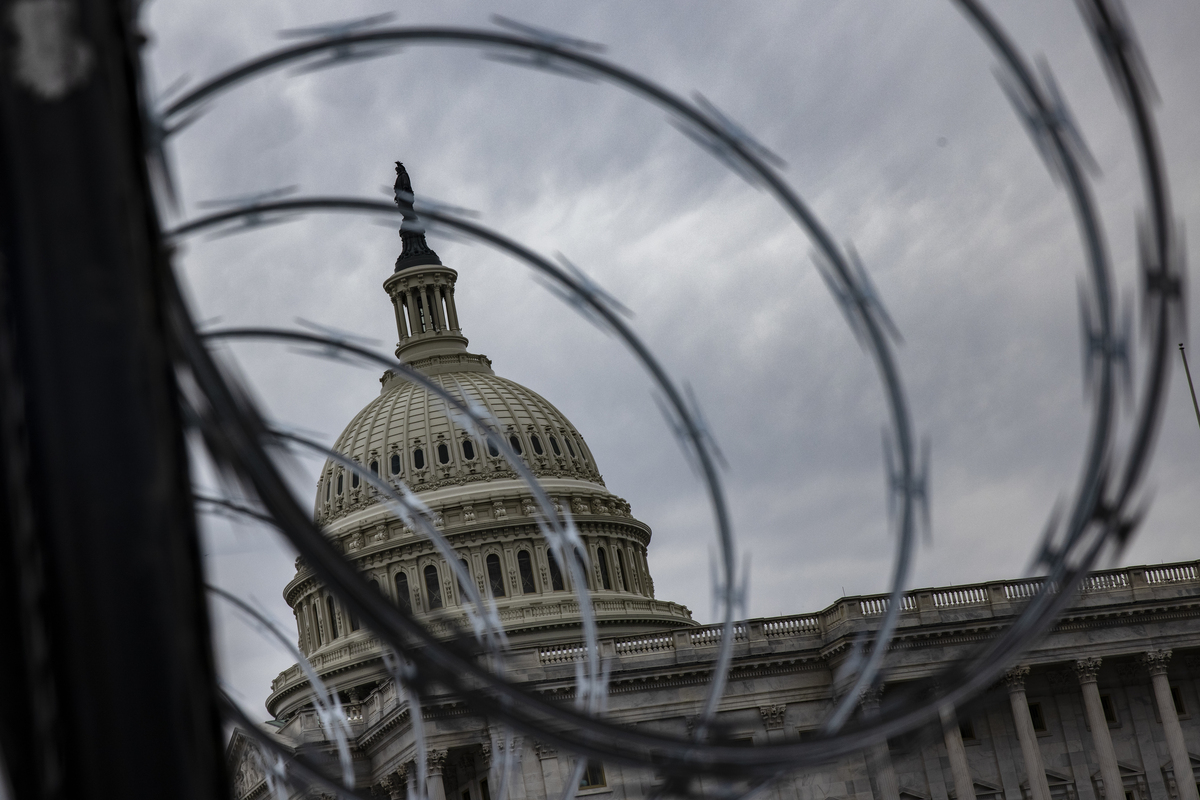 Razor wire is seen last week after being installed on the fence surrounding the grounds of the U.S. Capitol due to security threats.

With threats looming, armed troops are stationed every few feet. Up to 25,000 troops are expected Wednesday in Washington to fortify the inauguration.

It’s like a scene from a war zone in another country. But in fact that’s more troops than the U.S. currently has deployed in Afghanistan, Iraq, Syria and all of Africa combined.

Getting through Wednesday is the first part. Expect a speech that is a 180-degree turn from Trump’s “American carnage” address four years ago.

Biden’s speech will stress unity, but there will be a glaring, yet invisible sign of just how difficult that will be.

In a fit of protest, Trump won’t be there. It’s the first time in 150 years that a sitting president is not attending the inauguration of his successor.

The Trumps have cast aside other traditional signs of the peaceful transfer of power. When Biden’s daughter Ashley was asked Tuesday on NBC’s Today by Jenna Bush Hager, the daughter of a former Republican president, whether soon-to-be first lady Jill Biden had heard from Melania Trump, she said, “No, I don’t think they’re doing the traditional protocol, which is unfortunate, but I think we’re all OK with it.”

Jenna Bush: “Has your mom heard from Melania Trump about doing the traditional protocols?”

Ashley Biden: “No … but I think we’re all okay with it.” pic.twitter.com/ft6zjG51ra

President Trump convinced tens of millions of his followers of false claims about a stolen election and widespread fraud, none of which is true. Key members of his own administration called it the most secure election in history.

Much of the mob that stormed the Capitol echoed Trump’s talking points, which were only amplified by conservative media in the runup to the Jan. 6 violence.

The misinformation consumed by many on the right has been fed for decades through prime-time cable dressed up as straight news. Facebook memes and outfits even further on the fringe than Fox News are growing in popularity. Conspiracies are being mainstreamed.

There is no good answer for unraveling that. So the country will remain sharply divided.

Trump leaves office with a 38% approval rating in the latest NPR/PBS NewsHour/Marist poll, and Biden gets more positive reviews than Trump so far. A majority approve of how he handled the transition, think he’ll do more to unify than divide and more people like him than don’t, but not by much.

But strikingly, 8 in 10 Republicans approve of the job Trump was doing, and 7 in 10 of them don’t accept the results of the presidential election.

So Republicans have little political incentive to work with Biden.

And Biden has an ambitious agenda — a $1.9 trillion COVID-19 relief plan, requiring a $15 federal minimum wage, an immigration overhaul addressing the millions of immigrants in the U.S. illegally, not to mention trying to lead a dialogue on race in America.

As with all presidents, Biden doesn’t have a magic wand. He can’t heal families torn apart by views of Trump in one swoop. And he certainly can’t get his agenda implemented without the help of Congress.

The president, after all, controls the sword, but the Congress controls the purse. And Biden is going to need an awful lot of what’s in that bag.

While Democrats will control both the House and Senate, it will only be just narrowly. The Senate will be tied 50-50. On tied votes, soon-to-be Vice President Kamala Harris will break them.

Republican Senate leader Mitch McConnell in recent days has spoken out against Trump and laid blame at his feet for the violence at the U.S. Capitol on Jan. 6. 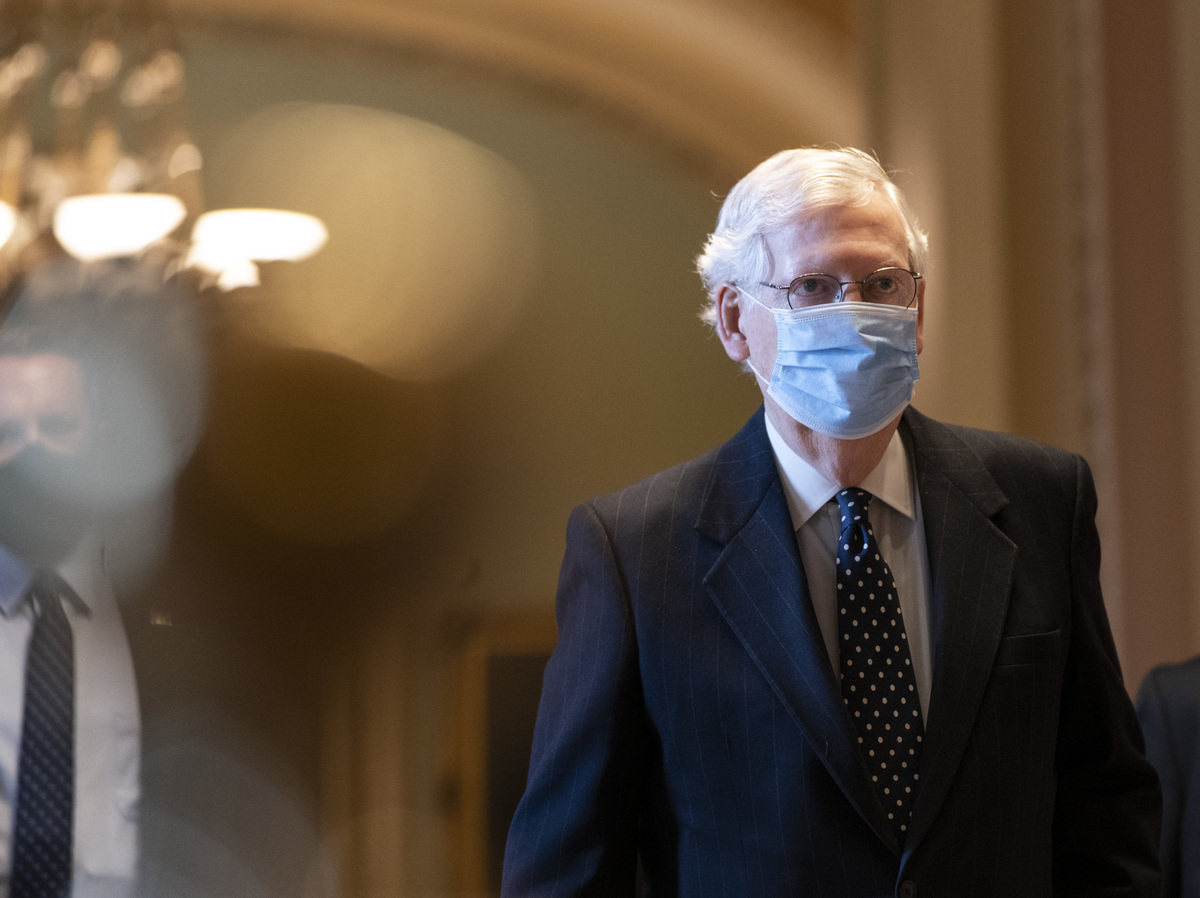 “The mob was fed lies,” McConnell said on the Senate floor Tuesday. “They were provoked by the president and other powerful people, and they tried to use fear and violence to stop a specific proceeding of the first branch of the federal government which they did not like.”

Still, for most big legislative items, it will require 60 votes to overcome a filibuster. And McConnell used the filibuster more than any minority leader in history during the Obama years.

Will he really be turning over a new leaf of bipartisan camaraderie and goodwill?

McConnell is undoubtedly eyeing taking back the Senate in two or more years, and he will need the support of his Republican members to be majority leader again.

What’s more, Republicans, who turned a blind eye to Trump’s deficit spending and ballooning of the debt, are already becoming fiscal hawks once again.

“What I’m concerned about is we seem to have no concern now about borrowing money in the short term,” Sen. John Thune, R-S.D., said Tuesday during the confirmation hearing for Janet Yellen to be Treasury secretary.

He went on to lay out the traditional Republican argument about how the parties aim to balance the budget — Republicans want to cut spending, while Democrats seek more revenue, which means increasing taxes.

But that didn’t apply to Trump. The national debt increased by $8 trillion under the outgoing president to almost $28 trillion. Trump’s tax cuts alone cost $2.3 trillion.

The stage at the U.S. Capitol is prepared for Biden’s inauguration. There will be no crowd allowed on the National Mall this year. Susan Walsh/Pool/AFP via Getty Images hide caption 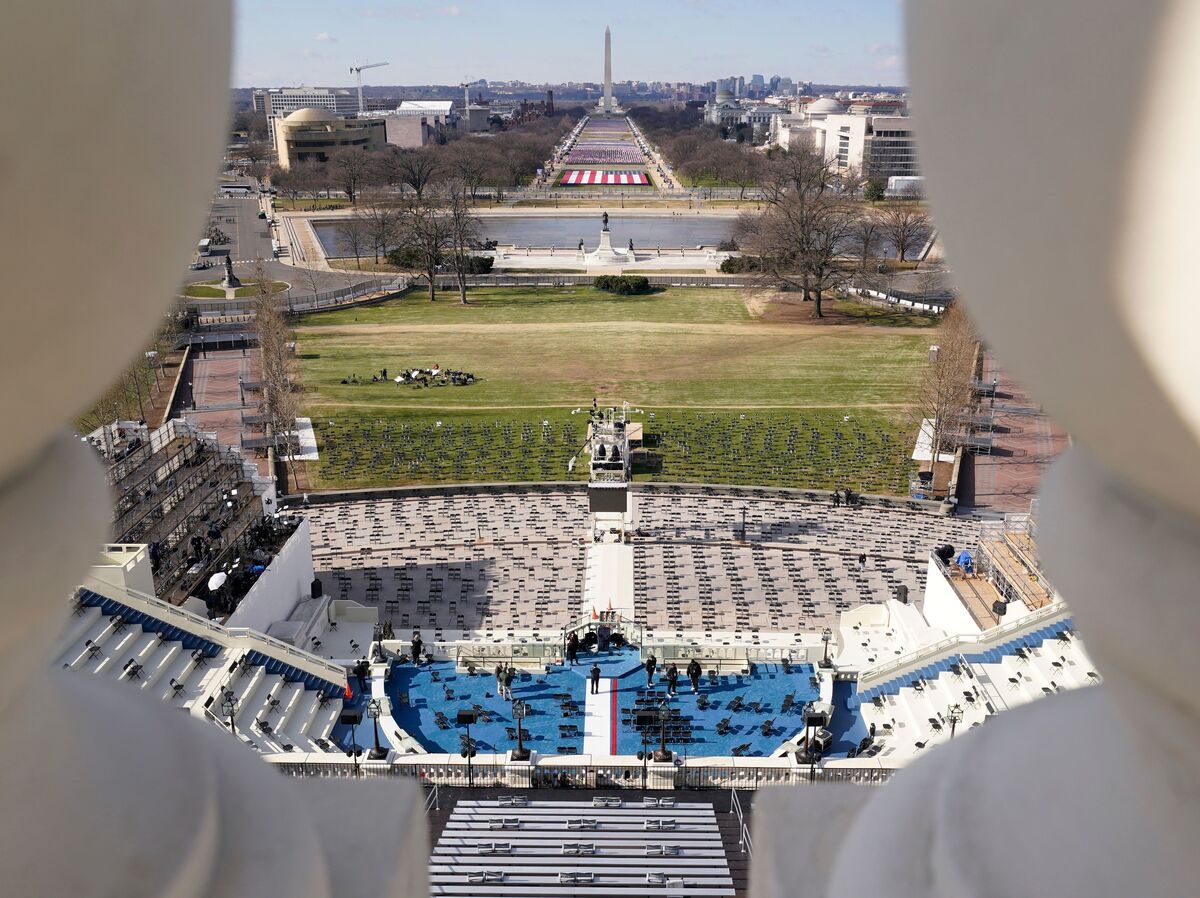 The stage at the U.S. Capitol is prepared for Biden’s inauguration. There will be no crowd allowed on the National Mall this year.

But it’s not just money, it’s also familiar cultural fights. Sen. Josh Hawley, R-Mo., who has faced criticism for his role in objecting to Biden’s win ahead of the violence at the Capitol, said Tuesday that he was putting a hold on Biden’s choice to lead the Department of Homeland Security, Alejandro Mayorkas.

“Mr. Mayorkas has not adequately explained how he will enforce federal law and secure the southern border given President-elect Biden’s promise to roll back major enforcement and security measures,” Hawley said, going on to cite Trump’s border wall.

And all of this is to say nothing of the pressures Biden is facing from the progressive left, which wanted nothing more than to beat Trump. Now that they have, progressives are eager to make sweeping change. But the numbers in Congress aren’t there.

If Biden, progressives and even many Republicans on Capitol Hill were looking to move on from Trump, it’s going to take a little while. That’s because much of what Biden wants to do — whether it’s dealing with COVID-19 or just confirming Cabinet secretaries — is going to have to share time with Trump’s impeachment trial.

The House is expected to send the article of impeachment to the Senate soon, and when it does, the Senate has to take it up immediately. And there is only so much time in the day.

Biden is aiming to at least bring down the temperature and bring back a degree of traditional Washington comity. That was evident Tuesday night in his somber ceremony in front of the Lincoln Memorial Reflecting Pool, remembering the 400,000 Americans who have died from COVID-19.

It’s notable that this was the first time in this year of the coronavirus that there was a national moment focused on remembering the dead, as many Americans couldn’t even be with loved ones who died in hospitals across the country and never had proper funerals.

The congressional leaders are aiming to continue the show of staidness Wednesday morning, with all planning to attend Mass with Biden ahead of his inauguration.

But soon it will be back to partisan bickering, and it’s going to take one hell of a prayer to get everyone to work together in earnest and unite the country.
Source Link

DeSantis: I’m ‘offended’ that a cop could ‘lose their job’ over vaccine mandates – Business Insider