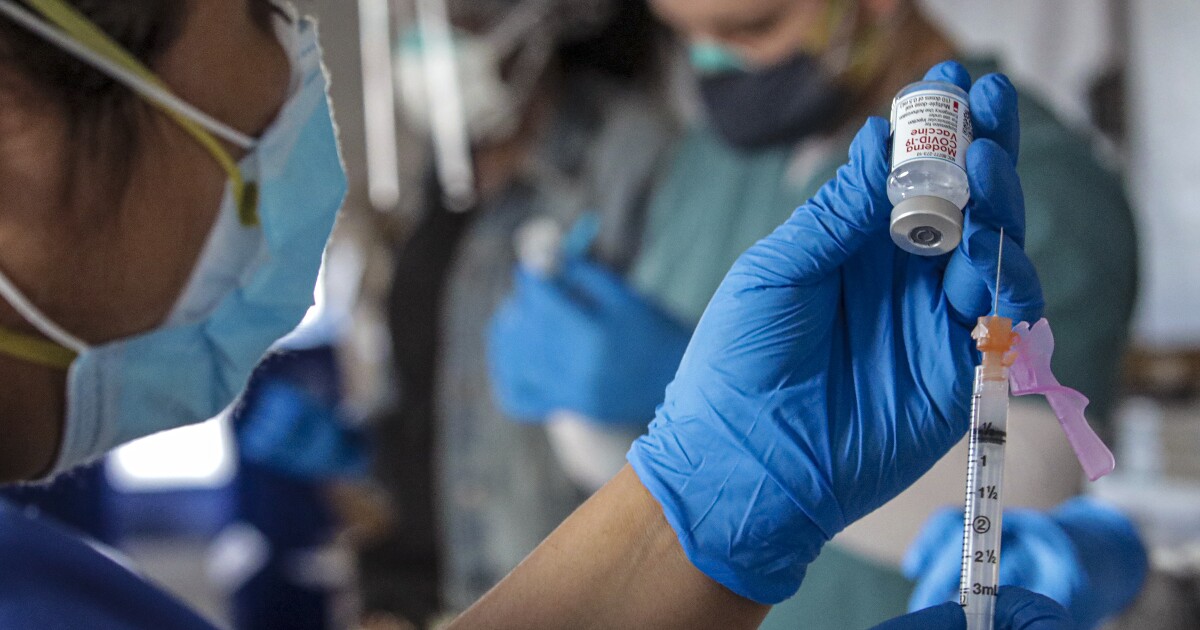 With COVID-19 vaccines still in short supply in California, there is growing debate about who should be given the next priority for the shots and how soon the state can ramp up efforts to better meet surging demand.

The state has launched a high-level task force to sort out logistics for how residents with disabilities and underlying health conditions will be prioritized next, state officials announced at Wednesday’s vaccine advisory committee meeting.

The group spent significant time discussing how those residents will be factored into the state’s priority guidance — a recommendation that could come as early as Friday.

“We are taking this incredibly seriously. This is the next priority group,” state epidemiologist Dr. Erica Pan said.

The committee’s current proposal is for individuals ages 16 to 64 with underlying health conditions or disabilities to be the next eligible group in the vaccine rollout.

It was not immediately clear whether the recommendations would usurp previous plans to target an age-based priority list or how eligibility would be determined. It also was unclear when vaccinations would become available for those groups.

Other segments of the population also are fighting to get earlier access to the vaccines, including essential workers and teachers, who have made inoculation a necessary step to getting back into the classroom.

Teachers and those who work in food and emergency services are slated for priority after healthcare workers, long-term care facility staff and residents and adults 65 and older. But limited vaccine supplies have made that timeline difficult to pinpoint.

Among the groups to consider are people whose age, underlying health conditions or other circumstances put them at greater risk of dying from COVID-19. Other Angelenos work in settings with a heightened risk of coronavirus transmission and could potentially carry the virus home with them. Others are employed in fields that provide critical public services.

“There are lots of people who need to get vaccinated, and it’s very hard to determine which of these priorities is more urgent, pressing and important,” Ferrer said during a briefing Wednesday. “So we all are going to need to be patient.”

Ferrer said the county has administered about 1 million vaccine doses, only a sliver of what’s needed for its 10 million-plus residents. But supplies are inconsistent.

“The name of the game right now is to keep everyone alive,” Ferrer said. “That’s the No. 1 priority for us … to get as many people as we can to be able to stay alive during this pandemic, and to reduce the risk for those who are at highest risk of dying.”

A statewide shortage is so acute that some counties in California that had begun to offer vaccines to lower priority groups, such as teachers, childcare workers and others who work in educational settings, have stopped vaccinating that group in order to focus on seniors.

Marin County on Jan. 21 announced that supply limitations had forced it to prioritize vaccinations on those 75 and older, and officials stopped scheduling appointments for people in lower priority groups.

“Three out of four COVID-19 deaths in Marin are among our residents 75 years or older. A vaccine offered a resident above age 75 is more than 300 times more likely to save a life than a vaccine offered to someone under age 50,” Dr. Matt Willis, the Marin County health officer, said in a statement.

“Across the region, most COVID-19 deaths have been in the 65-and-up age group. Thus, focusing vaccination efforts on those at greatest risk of death will have the biggest immediate impact on saving lives,” the joint statement said.

The Bay Area doesn’t have enough vaccines to inoculate all residents 65 and older, much less other worker-based groups that are next on the state’s suggested priority list: educators, food and agricultural workers and first responders.

Weekly dose allocations across the Bay Area — received from a formula designed to ensure fair distribution statewide — have slowed compared to shipments in December and early January. With the current pace, it will take several weeks to offer a first dose to all older adults who would like to be vaccinated, officials said.

“We need to be direct and honest with the public that, although we want to vaccinate everyone, right now, we just don’t have enough vaccine to do so,” Dr. Sara Cody, the health officer and public health director of Santa Clara County, said in a statement.

“Given the limited supply of vaccine, we must prioritize vaccinating those at greatest risk of death or serious illness,” she said. “We are anxious to vaccinate a much broader segment of the population and are ready to do so as soon as vaccine supplies allow.”

While federal officials said Wednesday that more vaccines will be coming soon, local health jurisdictions in California, including L.A. County, have complained that their weekly shipments are actually getting smaller, not bigger.

“We’ve steadily increased the amount of vaccine that we are sending to states,” Jeff Zients, coordinator of President Biden’s COVID-19 task force, said Wednesday. “We anticipate as we work hard to monitor and help and assist the manufacturers that we’ll continue to have supply increases.”

Gov. Gavin Newsom said Wednesday that he expects California will receive roughly 1.06 million vaccine doses this week, an amount he said is “encouraging.” Still, he said California — like the rest of the country — remains “limited on the basis of supply.”

“We recognize what you recognize: There are parts of the state that are already running out of vaccines, where they’re throttling back in terms of their dose allocations because they’re running out,” he said. “The federal government doesn’t have the doses to support states like ours at the scale we all would like to see.”

However, the pace of vaccinations has quickened in recent weeks. About 7.4% of Californians have received at least one dose, according to data compiled by The Times, and California has administered almost 63% of the doses it has received — a dramatic improvement from a week ago.

Amid that uptick, advocates for the disabled have been fighting to make sure that group gets a higher priority.

“I appreciate that the state made clear for the first time today that people with high-risk disabilities and underlying health conditions will be the next priority population, and that they are working with us to come up with an implementation plan. I will feel a lot better when they commit to a time frame for vaccinating high-risk people with disabilities,” Andy Imparato, executive director for Disability Rights California and a member of the vaccine advisory committee, said Wednesday.

“It feels like we are getting lip service and that the state Department of Public Health doesn’t really understand how to prioritize and vaccinate high-risk individuals with disabilities,” he said, noting that while the state has implied it will update its guidance, the plan is not yet set.

As for teachers, state and federal officials have insisted for some time that campuses for kindergarten through 12th-grade students can reopen safely without teachers being vaccinated — and they reiterated that point Wednesday.

“There is increasing data to suggest that schools can safely reopen, and that safe reopening does not suggest that teachers need to be vaccinated,” Dr. Rochelle Walensky, the new director of the U.S. Centers for Disease Control and Prevention, said at a briefing of the White House COVID-19 response team.

When asked about the CDC director’s comments, Newsom said he subscribes “to the Biden administration’s point of view, reinforced again today in their press conference, that we can safely reopen schools with [an] appropriate level of support.”