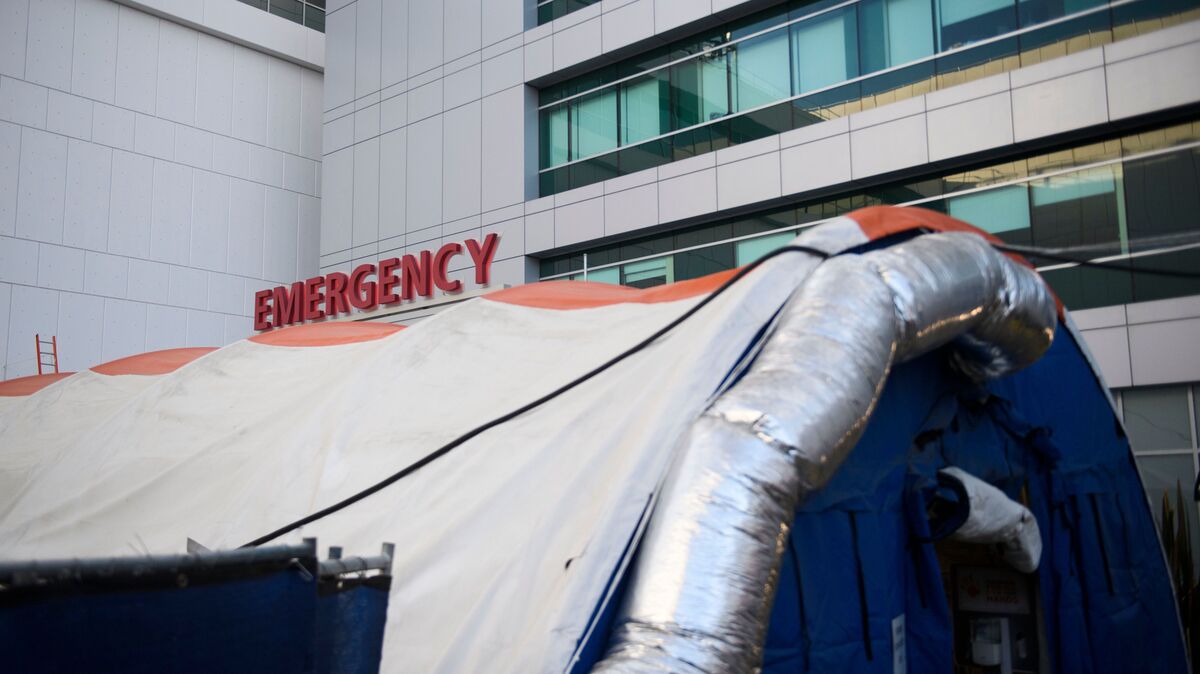 A field hospital tent stands outside the emergency department of the Martin Luther King Jr. Community Hospital earlier this month in Los Angeles. California is returning to a tiered restriction system.

California lifted stay-at-home orders for all regions on Monday as the government said hospital intensive care unit capacity is expected to increase.

The stay-at-home orders applied to regions of the state where availability in ICUs had dropped below 15%. Southern California, the Bay Area and the San Joaquin Valley were still under the order when it was lifted.

Since early December in most of California, restaurants had been closed except for takeout, and hair and nail salons, movie theaters, museums and zoos had been closed. Now restaurants will be allowed back to outdoor dining, and other locations will reopen with modifications.

The state is now returning to a color-coded tier system, which specifies varying restrictions based on case rates and test positivity in a particular county. Almost all residents will be in the strictest tier.

In an interview on NPR’s Morning Edition, California Health and Human Services Secretary Dr. Mark Ghaly discussed the reasoning for the changes and problems with vaccine rollout. California trails most other states in vaccinations as a percentage of population. Here are excerpts:

Why lift restrictions now in California?

The regional stay-at-home order, the order we put into place on Dec. 3, was really around protecting our health care delivery system, our hospital system, with a laser focus on ICU beds. And when we look at what’s happened over the last couple of weeks with transmission in our state — seeing dropping cases, dropping test positivity, overall drop in our effective transmission rate — our projections show that in four weeks that we will have improved our ICU capacity and gotten to a place where we feel like that system is solid and protected. So we built it around this, and that’s why we’re lifting it now.

Los Angeles is going to allow outdoor dining again, something that hasn’t happened since November. You’re comfortable with that?

Yeah, I mean, we know that events that happen outdoors, preferably with a mask on as much of the time as possible, are among the lower-risk events. And we prohibited it because any movement, any mixing outside of your home, was concerning when we had such tremendously high case rates. But as they’ve come down, of course, we must allow and really hope that people use their good judgment.

[The] new administration [of President Biden] is urging fresh focus on this to get through a terrible winter, urging 100 days of masking, for example. Is this the time to be lifting any restrictions at all?

Well, I mean, again, the call for 100 days of masking has been in place in California with a mask mandate for many, many months. So that’s not new here. So what we’ve lifted is essentially even more significant restrictions than what I think the new federal administration has called for in other states. And I think the restrictions we have here in California have helped us — for a population of 40 million people, dense urban centers throughout our state — to continue to have per capita death rates that are still, even though they’re rising, lower than many other states is really a point of exactly what we’ve been focused on, on saving lives.

California Gov. [Gavin] Newsom promised that there will very soon be a new, more statewide way of distributing vaccines in California because a lot of decisions have been left up to counties. What do you think has been going wrong?

I think that we have done a lot together and done right. We’ve learned that a decentralized model, although [it] works for many things, with something as operationally as complex as what we’ve seen this vaccine rollout to be, that centralization will help on a number of things.

First, it will make people’s expectations consistent across the state. We have 58 counties — some very big, some very small — and they do things differently. Helping bring some consistency both to what people’s expectations can be and what the vaccinators should expect in terms of accountability and measurement and data will we believe — and we’re already starting to see some of the benefits of that — will help us do things much, much better, if you will. And focus on our three big things with vaccines: equity, safety and speed. And getting there for all Californians is key.