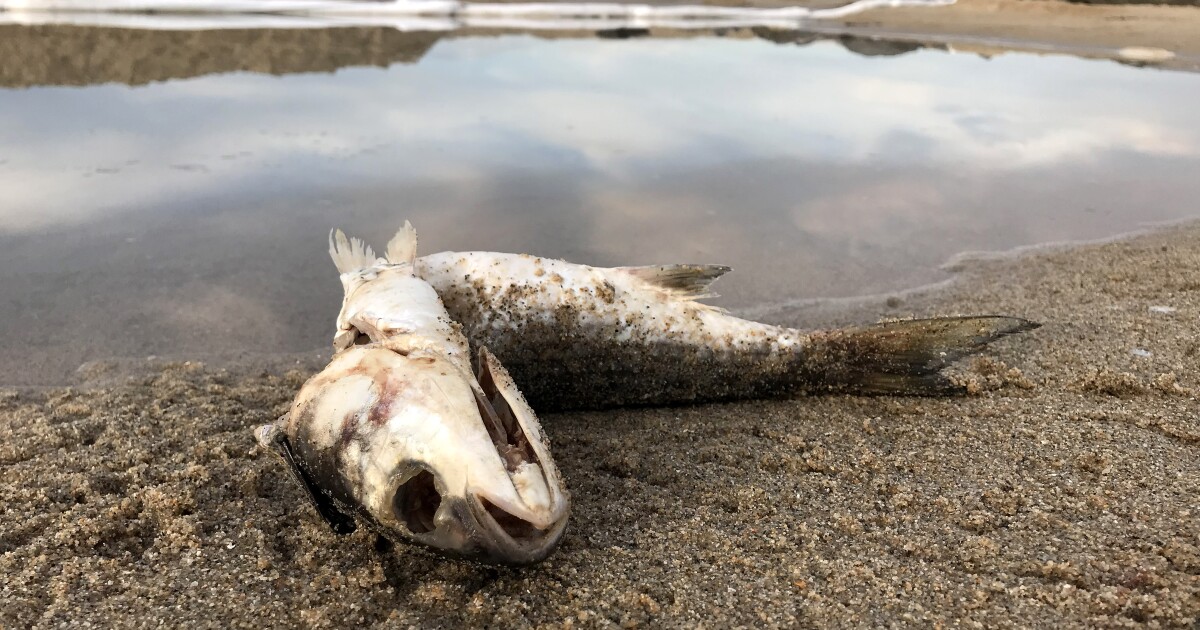 The spill, first reported Saturday morning, originated from a pipeline running from the Port of Long Beach to an offshore oil platform known as Elly. The failure caused roughly 126,000 gallons of oil to gush into the Catalina Channel, creating a slick that spanned about 8,320 acres. The spill has left oil along long stretches of sand in Newport Beach, Laguna Beach and Huntington Beach, killing fish and birds and threatening ecologically sensitive wetlands in what officials are calling an environmental catastrophe.

The oil will likely continue to encroach on Orange County beaches for the next few days, officials said. Laguna Beach closed city beaches Sunday night after projections showed the spill reaching Crystal Cove by 10 p.m. That beach is now closed. Officials said Monday they’re seeing evidence of oil on Laguna’s beaches, specifically stretches of sand in the northern end of the city.

“Right now it varies. The oil clusters range from the size of a quarter to just particle-size droplets,” said Kevin Snow, chief of marine safety for Laguna Beach. “Beach closures are needed to protect the health and safety of the public and to allow contractors to begin oil cleanup.”

The Crystal Cove beach had not reported any oil as of early Monday, but officials say that could change depending on the ocean currents throughout the day.

“We don’t have oil in there right now, so a huge priority is keeping oil from getting into the harbor,” Pope said.

Softball-sized clumps have washed ashore between the mouth of the Santa Ana River and 52nd Street. Much of the slick remains about a quarter-mile offshore, Pope said.

Newport Beach has not closed its beaches, but officials have asked people to stay out of the water. The Orange County Health Care Agency issued a health advisory Sunday recommending that those who may have encountered oil in the water seek medical attention.

In Laguna Beach, officials say roughly golf-ball-sized pieces of tar have washed up along Crescent Bay, a beach known for its distinctive cove that runs about a quarter-mile in length where Cliff Drive intercepts North Coast Highway, and Shaw’s Cove.

Two contracted oil-recovery vessels known as skimmers worked off the coast of Laguna Beach overnight to prevent as much of the oil from coming ashore as possible, Snow said.

“The entire city is a marine-protected area, which means we have sensitive marine habitat and wildlife here that is protected, and we need resources to protect this unique ecosystem,” he said.

The Coast Guard is also continuing to recover as much oil as possible. Fourteen boats working Sunday afternoon recovered about 3,150 gallons of oil from the ocean and deployed 5,360 feet of floating barriers known as booms in an effort to protect the coastline, according to the U.S. Coast Guard.

A 5½-mile stretch of sand in Huntington Beach from Seapoint Street near the Bolsa Chica wetlands to the Newport Beach city line at the Santa Ana River jetty remained closed Monday as crews continued cleanup efforts.

In Huntington Beach, which bore the brunt of the oil incursion Sunday, crews deployed 2,050 feet of booms to try to stop further incursion and protect sensitive wildlife areas, including Talbert Marsh, a 25-acre ecological reserve across from Huntington State Beach that is home to dozens of species of birds. County officials also built large sand berms in the area to keep ocean water and oil from continuing to flow into the habitat, which has already been breached by oil. Officials on Sunday requested additional booms to protect the Bolsa Chica Ecological Reserve.

Authorities are continuing to investigate the cause of the spill and say the timeline for cleaning up the area’s beaches remains unclear.

“I am devastated to share the news that the oil spill is expected to reach Laguna Beach this evening,” Assemblywoman Cottie Petrie-Norris (D-Laguna Beach) said late Sunday. “Our federal, state and county response teams are working through the night to try to mitigate this as much as possible.”