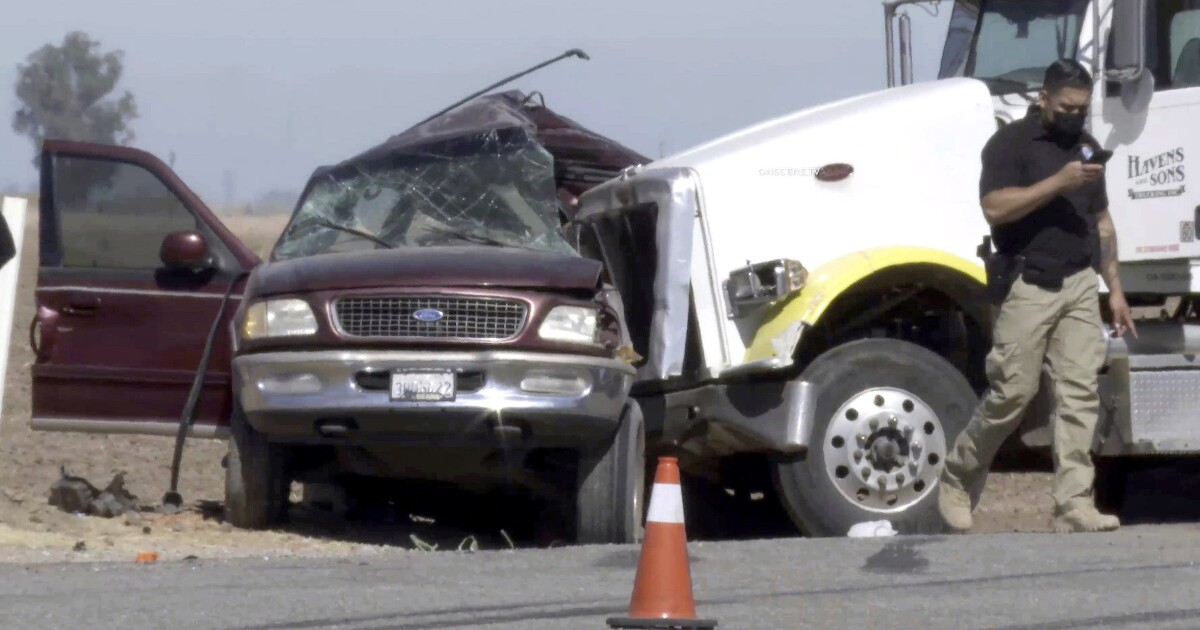 A collision between a semitruck and an SUV carrying more than two dozen people near the U.S.-Mexico border Tuesday morning has left 15 dead and several others injured, officials said.

Fourteen people died at the scene. One more died at El Centro Regional Medical Center, where six others are being treated, Cruz said. At least five more have been flown from the scene to other treatment centers, she said.

“The patients are, of course, going through a little bit of a difficult time,” said Adolphe Edward, chief executive of El Centro Regional Medical Center. “This was a major accident, and we are taking care of them in the emergency room department.”

Photos from the scene show a burgundy SUV, with the driver’s side wrapped around the front of the semitruck. The SUV’s windshield is shattered, and debris is scattered on the ground around the two vehicles.

Four people were airlifted by helicopter to the Desert Regional Medical Center in Palm Springs, where three of them are in intensive care, hospital public information officer Todd Burke said.

El Centro Fire Department units are also on the scene, along with Customs and Border Patrol officers, who are assisting the Imperial County Sheriff’s Office.

Fifteen first responders and five fire engines arrived at the scene off Highway 115, just north of Holtville, Flores said. A helicopter whirred overhead as he responded to questions Tuesday morning about the crash.

Highway 115 is currently blocked, heading north from Holtville, he said.

#BREAKING Truly horrific. At least 15 people have died in a crash involving a semitruck and SUV in Imperial County. We know 4 people are being treated at Desert Regional Medical Center in Palm Springs, 3 are in the ICU. We’ll be live @KESQ 12p.

The cause of the crash was not immediately available, but for decades, there have been concerns about the high death toll in crashes along the California-Mexico border. Many of the wrecks involve immigrants trying to cross into the U.S., with a significant number of crashes occurring during chases by American authorities.

There is no evidence this collision involved a chase.

A Los Angeles Times-ProPublica investigation in 2018 found that over three years, U.S. Border Patrol agents engaged in more than 500 pursuits in border districts in California, Texas, New Mexico and Arizona. Of those, one in three ended in a crash. In agricultural areas of California, such as Imperial County and the Central Valley, there also have been concerns about deaths involving farmworkers packed into vehicles.

A series of horrific crashes involving farmworkers in vans in the Central Valley sparked legislation in the early 2000s requiring vans and buses that transport nine or more workers to be equipped with passenger seat belts and receive annual safety certification from the California Highway Patrol. The laws also stepped up penalties and education programs for growers.