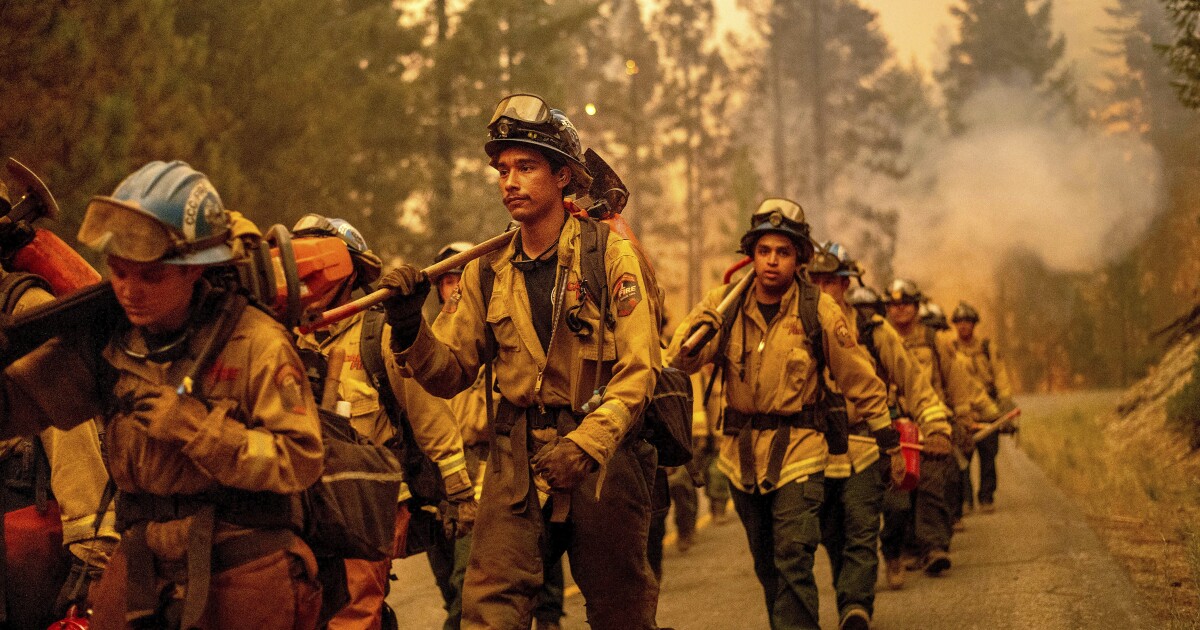 Crews were continuing to battle two massive wildfires in Northern California on Saturday, with more residents ordered to flee their homes.

The Dixie fire had burned 181,289 acres and was 14% contained as of Saturday, when it prompted a new wave of evacuations for residents in Plumas County. At least 16 structures had been destroyed, and more than 7,000 were threatened, authorities said.

The fire was burning to the northeast through everything from timber to grasses, all of which are unseasonably dry, said Capt. Mitch Matlow, public information officer for the fire.

“This is more like what we would typically see in the late fall, at the end of the fire season before the rains come,” Matlow said. “The fuels got drier earlier in the season, which leads to more erratic fire behavior.”

About 120 miles southeast, straddling the border with Nevada, the 65,152-acre Tamarack fire was continuing to spread, having forced about 2,400 people from their homes.

The fire, which was 4% contained as of Saturday morning, had burned at least 15 structures on the California side, in Alpine County. At least 13 structures were destroyed in Douglas County, Nev., officials said.

The long-term drought has been compounded by sun-drying that takes place when humidity is low, Matlow said.

“You couple those with warmer than normal weather, and all of that just combines to create situations that are primed for fire,” he said.

California saw its hottest June on record this year amid rising global temperatures that have been linked to larger, more intense fires and longer, more destructive fire seasons, especially in areas choked by overgrowth due to decades of aggressive fire suppression.

Conditions in the Lake Almanor region were expected to continue to be smoky and slightly warmer than normal over the next couple of days, with highs in the low 90s, said Karl Swanberg, forecaster with the National Weather Service in Sacramento.

More than 4,200 personnel were assigned to the Dixie fire. Firefighters have been challenged by the remote terrain, which has forced them to cut lines by hand in some areas, Matlow said.

“They’re having to hike in miles because it’s not accessible by dozer,” he said.

The fire, which has grown into the state’s largest of the season so far, was sparked July 13 in Feather River Canyon. Pacific Gas & Electric was alerted to an outage at Cresta Dam and dispatched a troubleshooter, who wasn’t able to reach the location of the suspected problem until more than nine and a half hours later, according to a report the utility filed with the California Public Utilities Commission on July 18. By then, the worker found a tree had fallen into a conductor and a fire had started at its base.

The fire grew to 15 acres later in the evening; by the following morning, it had grown to 1,200 acres.

In its filing, PG&E blamed challenging terrain and bridge repairs for the delay in the worker reaching the site, but prosecutors investigating the incident have said he didn’t arrive in the area until up to four hours after the outage was detected because the utility did not consider it to be a high-priority issue, according to a report from KQED.

A PG&E representative declined to discuss the allegations but said the information in the report to the CPUC was preliminary, and the utility is cooperating with the investigation into the fire.

The fire started not far from the town of Paradise, where PG&E equipment sparked the 2018 Camp fire, which became the deadliest in state history. PG&E in March pleaded guilty to 84 counts of involuntary manslaughter in connection with that fire.

Meanwhile, the 2,800-acre Fly fire was burning roughly two and a half miles to the east of the Dixie fire, having started north of Quincy on Thursday. About 117 personnel had the fire 5% contained as of Saturday morning, and its cause remained under investigation.

The Tamarack fire started in a rocky timber area, but as it moved east and dropped in elevation, it began burning through lighter, flashier fuels like sage, pinyon and juniper, said Tracy LeClair, public information officer with the Rocky Mountain Type 1 Incident Management Team, which is handling the fire.

“That’s where we are seeing a really rapid rate of spread, especially when the winds have picked up,” LeClair said.

Fueled by critically dry vegetation and low humidity, the intensity has lent itself to extreme fire behavior, particularly when the winds shift in the afternoons and align with canyons and drainages, she said.

“It’s just steep, rugged terrain in some areas, and the hot, dry windy conditions have been the biggest challenge,” LeClair said.

Further complicating matters, the Tamarack fire is just one of 88 currently active large fires that have together burned 1,456,925 acres in 13 U.S. states, according to the National Interagency Fire Center. That has put a strain on manpower and equipment that is being felt across the country.

“We have had resources that have been delayed in getting here, just because we’ve had to reach out further away, rather than getting resources that are close,” LeClair said.

About 1,425 personnel were working to keep the fire from moving further east, toward populated areas. Authorities were hoping to soon get power back on the north side of the fire, near the communities of Crystal Springs and Woodfords, so people could return to their homes there, LeClair said.

“With the drought that has continued over the past several years, I think we are starting to see these larger, more active fires earlier in the year,” she said. “And as we get more and more development in the wildland-urban interface, we’re seeing more and more structures threatened.”

Forecasters were anxiously awaiting the arrival of a significant monsoonal moisture surge pushing up from the south, which was expected to reach northern Nevada on Monday and stick around through Wednesday.

Depending on how the system takes shape, it could bring either dry lightning, widespread thunderstorms or consistent rains with pockets of thunderstorms, said Scott McGuire, meteorologist with the National Weather Service in Reno.

“We’re keeping our fingers crossed we can get more of a stratiform rain event versus more lightning,” he said.

Where a fairly consistent, wetting rain could help firefighters get the upper hand, localized heavy rainfall could cause debris flows in the recent burn scars, he said. Thunderstorms could also produce gusty outflow winds that make the fire harder to control, as well as lightning that ignites new fires, he said.

“It’s just a little too early to tell how it’s going to play out at this point,” McGuire said Saturday.

The Tamarack fire started July 4 when lightning struck a rocky ridgetop in the Mokelumne Wilderness and at first, only a single tree was ablaze. Federal firefighting authorities felt there were sparse enough fuels and sufficient natural barriers to contain the flames, and said the steep, remote terrain posed safety concerns when it came to sending in crews.

In addition, firefighters were contending with 23 other lightning fires in the area, some of which were deemed higher priority. Officials initially chose to monitor the Tamarack fire.

But 12 days later amid high winds and low humidity, the fire took off and made a run downslope, growing to 500 acres by the evening of July 16. By the following evening, it had grown to 21,000 acres and burned at least two structures.