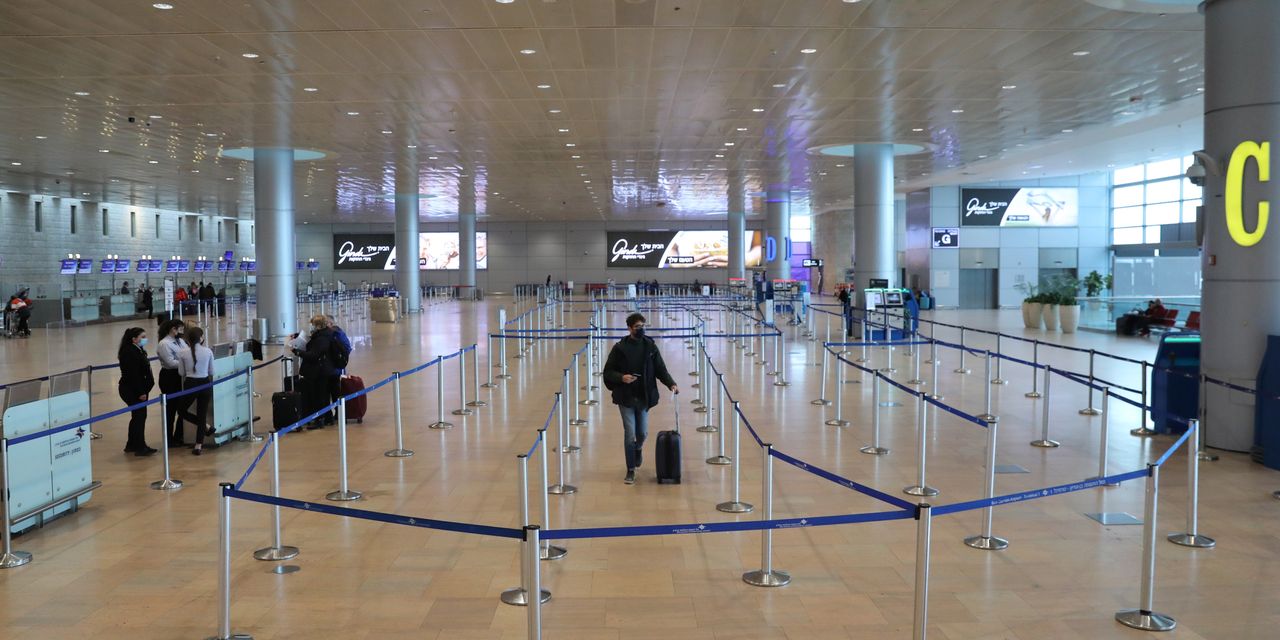 Israel is set to bar its citizens from traveling to the U.S. and Canada because of the spread of the Omicron variant—as the World Economic Forum said it would postpone next month’s annual meeting in the Swiss mountain resort of Davos for the second successive year.

As Omicron continues to drive new restrictions on travel and social interactions, Israel’s government said it would place the U.S. and Canada along with eight other nations on a growing list of countries to which its citizens are barred from traveling.

Also placed on the list Monday were Italy, Germany, Belgium, Hungary, Morocco, Portugal, Turkey and Switzerland. The ban comes into effect Tuesday night, subject to a final approval by lawmakers expected on Tuesday morning. Most of Africa and other European countries are already on the Israeli no-fly list.

Israel’s Prime Minister Naftali Bennett warned that the country is just entering its fifth Covid-19 wave, ushered in by the spreading Omicron variant within its borders.

“In my opinion, in three or four weeks, maybe sooner, we will see a jump in morbidity that will leave no room for doubt,” Mr. Bennett said Sunday.

The criteria Israel’s health ministry uses to put countries on the no-fly list is based on the percentage of travelers to Israel from a certain country that test positive for the variant, or on how widespread the variant is in the country or its immediate neighbors.

Israel was the first country to close its borders to foreigners in late November just as word of the Omicron variant began to spread from South Africa, so most incoming travelers are Israelis themselves. Those returning from countries on the no-fly list must quarantine for seven days before another negative Covid-19 test can release them from isolation.

Mr. Bennett asked business leaders to have their employees start working from home if possible.

The majority of Israel’s 175 confirmed Omicron cases are returnees from abroad, though it has also begun to spread though the local community, according to figures published by Israel’s health ministry on Sunday. There are another 380 cases where the variant is highly suspected.

“The numbers are still not high but this is a very contagious variant and doubles every two or three days, as we are seeing around the world. It is possible to say that the fifth wave has begun,” Mr. Bennett said Sunday.

The WEF’s organizers said it would delay the in-person meeting planned for Jan. 17-21 until the early summer and hold online sessions for participants next month.

“Despite the meeting’s stringent health protocols, the transmissibility of Omicron and its impact on travel and mobility have made deferral necessary,” the organization said.

Much the same happened last winter. The WEF abandoned plans to hold in-person sessions, but also had to give up on its plans for a summer session, again because of the disruptive effect of the pandemic on business travel plans.

The yearly event, which first took place in 1974, had been a mainstay of the global business set. Past attendees have included Chinese President Xi Jinping, former President Donald Trump and financier George Soros and thousands have crowded annually into the Alpine resort

Elsewhere, a lockdown was reimposed in the Netherlands on Sunday because of Omicron, with all nonessential shops, bars and restaurants closed until mid-January. In Denmark, new national restrictions began Sunday morning. Cinemas, amusement parks, theaters and museums will shut for the next four weeks. Bars and restaurants must also shut at 11 p.m.

Denmark’s Serum Institute said Omicron is expected to become the dominant strain there within days. It is already dominant in the U.K., according to estimates derived from British health data.

The government outlined financial support on Sunday for those businesses compelled to close and for those closing voluntarily, with the spread of the variant already limiting footfall for many businesses. The government also agreed a salary compensation program last week.

In Germany, regional and federal government representatives are expected to meet for an unscheduled Covid-19 summit on Tuesday to review additional restrictions ahead of the Christmas holiday.

Scientific advisers to the government warned that Omicron’s rapid spread poses a threat to Germany’s critical infrastructure that could require support from the armed forces and disaster relief services.

The highly infectious nature of the variant means there is a risk that large segments of workers in sectors ranging from police to firefighting, healthcare, electricity and water supplies may have to isolate at the same time, threatening the continuity of these services, the newly appointed task force of experts warned in a position paper dated Dec.19 and seen by The Wall Street Journal.

As a consequence, authorities should take measures now, limiting physical contacts between people and ensure that essential services are maintained in the event of a rapid rise in infections, the experts warned.

—Sandra Kilhof in Copenhagen and Bertrand Benoit in Berlin contributed to this article.