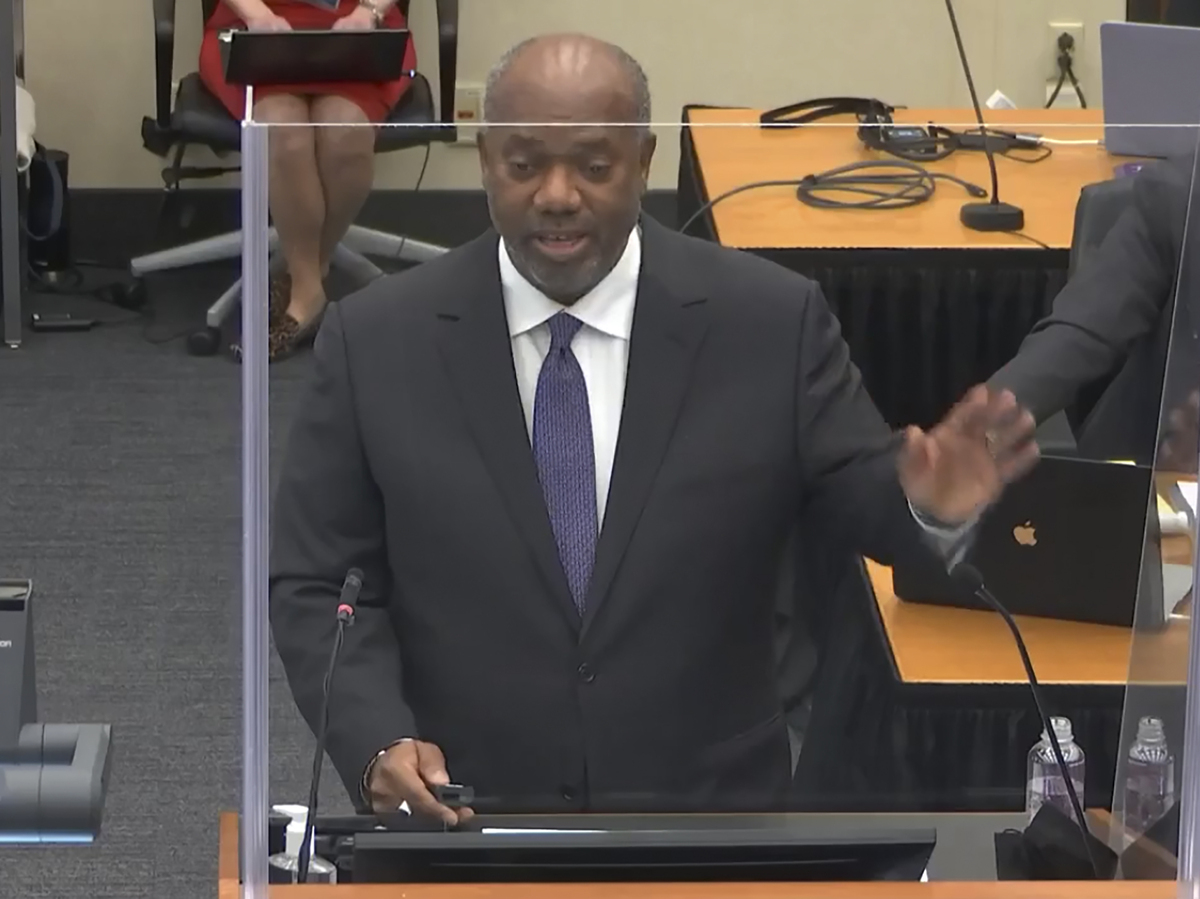 Former Minneapolis police officer Derek Chauvin broke departmental rules and showed a disregard for the life of George Floyd when he pinned Floyd down in the street last year, the prosecution said in opening arguments of Chauvin’s murder trial Monday.

“You will learn that on May 25 of 2020, Mr. Derek Chauvin betrayed this badge when he used excessive and unreasonable force upon the body of Mr. George Floyd,” Special Assistant Attorney General Jerry Blackwell told the jury.

As he spoke, Blackwell showed jurors an eyewitness photo from the scene, with Chauvin holding his knee on Floyd’s neck.

Moments before showing that image, Blackwell presented the oath Minneapolis police officers swear to follow. “I will enforce the law courteously and appropriately … never employing unnecessary force or violence,” a highlighted portion of the oath reads.

In another highlighted portion, officers promise, “I recognize the badge of my office as a symbol of public faith, and I accept it as a public trust to be held so long as I am true to the ethics of the police service.”

Evidence in the case will prove to the jury, Blackwell said, “that there was no excuse for the police abuse of Mr. Chauvin” against Floyd.

He said the jury will be asked to find Chauvin, 45, guilty. He is facing three criminal charges, as listed in court documents:

Blackwell gave an overview of evidence jurors will hear, including medical findings about how Floyd’s body reacted to being pinned down on the asphalt.

Blackwell then showed jurors an eyewitness video from the scene, saying they would be able to draw their own conclusions from the footage.

It’s the first of what will likely be many videos the jurors will be presented, of the actions leading up to and immediately following Floyd’s death on Memorial Day. Some of those videos will be from officer-worn body cameras; others come from witnesses — some of whom will testify in court.

The people who stood on the sidewalk and street near the scene of Floyd’s death represent “a veritable bouquet of humanity,” Blackwell told the jury in his opening argument.

Blackwell also discussed medical aspects of the case, saying the jury will learn about what Floyd’s body was experiencing in those final minutes of life. He said Floyd’s body made involuntary movements while he was being held down by Chauvin, including a seizure and “agonal breathing” from oxygen deprivation.

Despite Chauvin being told twice that Floyd did not have a pulse, “he does not let up, and he does not get up,” Blackwell said. He added that the officer did not move off of Floyd even as a paramedic sought a pulse. It wasn’t until a gurney was brought to remove Floyd’s body that Chauvin lifted his weight off of the other man, Blackwell said.

Saying that Chauvin’s actions were out of proportion to the crime Floyd was suspected of, Blackwell noted, “It was about a counterfeit $20 bill that was used at a convenience store” – a misdemeanor, he added. He later added that Floyd died in police custody despite not attempting to flee or harm anyone else.

“There were five grown men, armed police officers, who were on the scene over a fake $20 bill,” Blackwell said, noting that along with four Minneapolis police officers, a member of the park police was also present.

The officers who responded that day had other options to handle the case, including simply writing Floyd a ticket, he said.

During the trial, Blackwell said, the jury will also learn more about George Perry Floyd, noting that his family usually called him by his middle name.

Blackwell also gave the jury an overview of the prosecution’s case on another crucial aspect of the trial: the cause of Floyd’s death.

The Hennepin County medical examiner ruled last June that Floyd’s death was a homicide, saying his heart and lungs stopped functioning “while being restrained.”

The autopsy report cited neck compression, but it also noted “other significant conditions,” including fentanyl intoxication, recent methamphetamine use and signs of heart disease.

But Blackwell stressed that the prosecution believes Floyd’s death wasn’t the result of heart failure, which he said would have been an “instant death.”

Noting the prolonged restraint of Floyd, Blackwell said, “He died one breath at a time, over an extended period of time.”

Chauvin’s defense attorney Eric Nelson told jurors later Monday that Floyd had a serious heart condition and had dangerous drugs in his system when he died.

“The evidence will show that Mr. Floyd died of a cardiac arrhythmia that occurred as a result of hypertension, his coronary disease, the ingestion of methamphetamine and fentanyl, and the adrenaline flowing through his body — all of which acted to further compromise an already comprised heart,” Nelson said.

In the prosecution’s argument, Blackwell acknowledged that Floyd had struggled with an addiction to opioids. But, he added, “he did not die from an opioid overdose.”

The prosecutor said that while the amount of fentanyl found in Floyd’s system might be considered lethal for some, the tolerance he built up over years of addiction did not make it deadly in his case.

People who die from such an overdose do so in an unresponsive stupor, Blackwell said.

“They’re not screaming for their lives, they’re not calling on their mothers,” he added. “They are not begging, ‘Please, please I can’t breathe.’ ”
Source Link