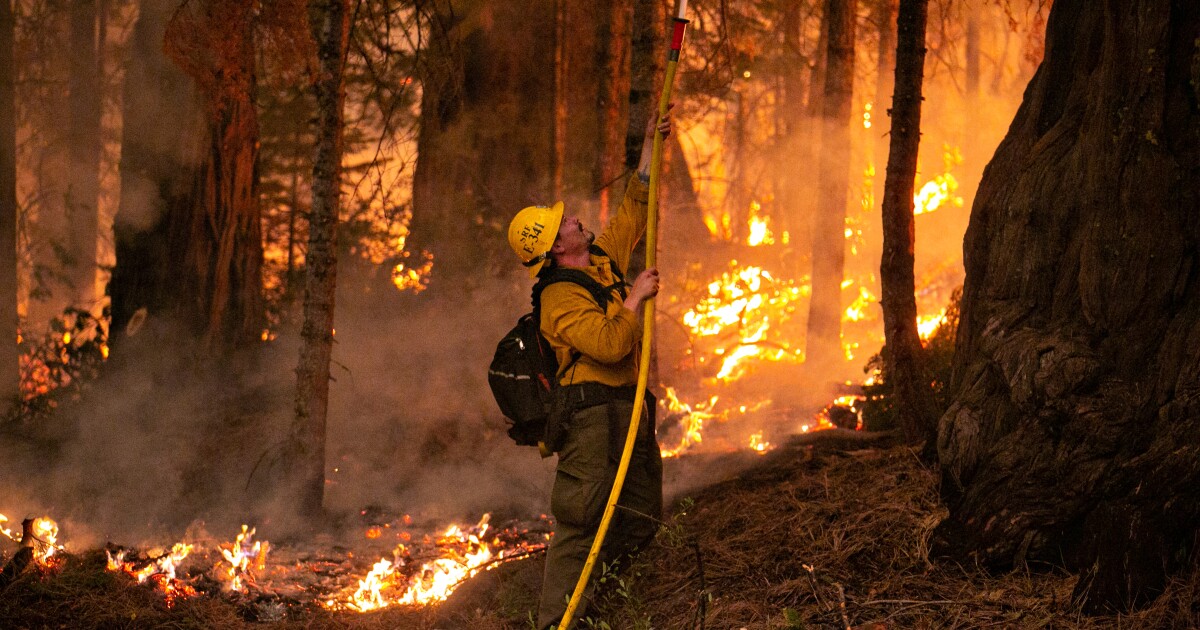 The fire, which already has destroyed hundreds of structures, has been marching toward Lake Tahoe for days, but officials said the dangers heightened this weekend due to winds and heat.

“Today’s been a rough day, and there’s no bones about it,” said Jeff Marsolais, Eldorado National Forest supervisor, during a briefing Sunday evening.

Evacuation orders include communities just south of South Lake Tahoe, including nearly all the Lake Tahoe Basin in El Dorado County, from the California-Nevada state line on the lake’s southern end to Tahoma on its western shore.

“We are expecting a big change in the weather pattern,” incident meteorologist Jim Dudley said during a briefing Saturday evening. “What will happen is that the winds that have been affecting the fire on the ground level … are going to be aided by southwesterly winds aloft.”

Officials said the winds would meet with hot, dry weather to create elevated fire conditions. Gusts on Monday could be as strong as 35 mph.

The majority of growth and activity was on the fire’s northeastern edge, near the town of Strawberry and in the direction of the Lake Tahoe Basin, officials said. By Monday morning, the fire had seared 177,260 acres and destroyed 472 homes.

The fire was 19% contained Sunday morning, but the containment dropped to 13% by the afternoon and was at 14% on Monday morning. More than 20,000 structures are threatened, officials said.

Crews on Sunday were working hard and fast to get ahead of the shift, but they were met with increasingly erratic conditions and extreme fire behavior.

“It’s burned aggressively all day,” said Eric Schwab. The operations section chief noted that the fire had been moving about half a mile each day, but “today it has already moved about 2½ miles on us with no sign that it’s starting to slow down.”

“Therefore,” he said, “we resort back to our No. 1 priority: Get people out of the way and protect life.”

Officials urged people to obey evacuation orders and said those under evacuation warnings should gather important items such as medications and be prepared to take action if necessary.

“You need to be aware of what’s going on with the fire and try to keep yourself updated,” said Eric Lee, law enforcement liaison for the incident management team.

Adding to the challenges is the area’s topography, which includes deep drainages and canyons that can act as funnels for the wind and flames, officials said.

Volmer said the fire was spotting at distances as far as three-fourths of a mile, and the probability of those spots creating new fires is 90%. In the days to come, that probability will increase to 95%.

Winds have long been the X-factor in the state’s extreme fire behavior, officials said, so the forecast for the week could spell trouble for crews and for residents awaiting answers.

“We’ve had spotting occurring with these weaker winds,” said California Department of Forestry and Fire Protection public information officer Henry Herrera. “So once they reach those [higher] speeds, there is potential for increased spotting, and for the spotting distance to increase as well.”