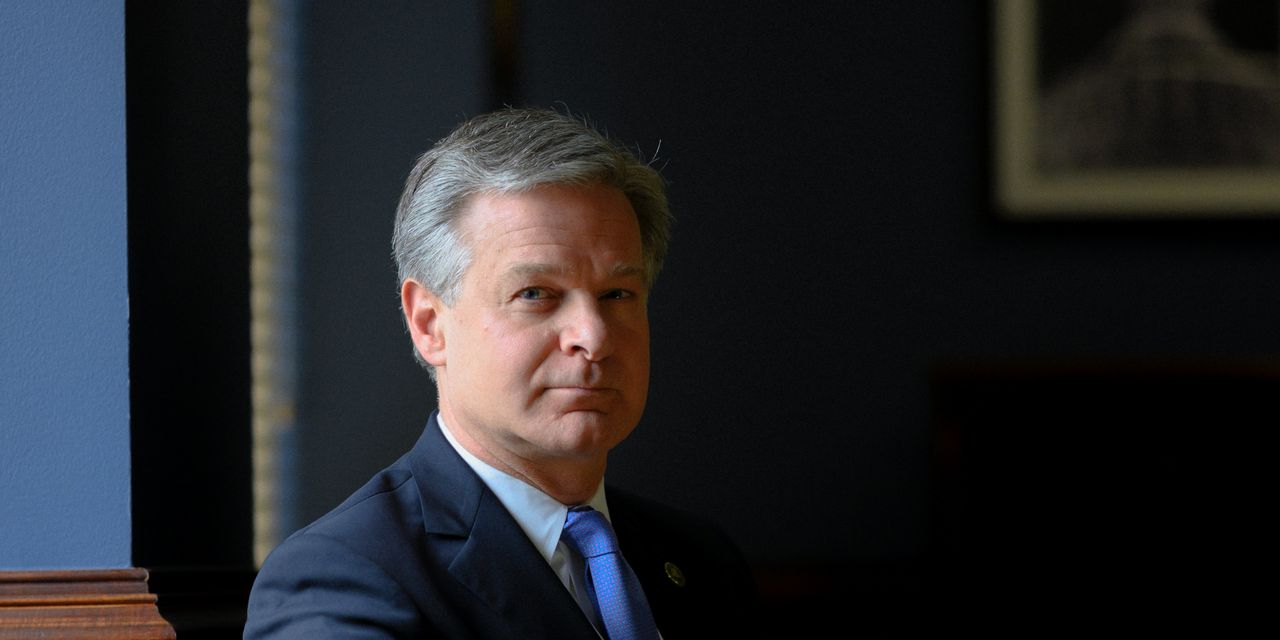 FBI Director Christopher Wray said the agency is investigating about 100 different types of ransomware, many of which trace back to hackers in Russia, and compared the current spate of cyberattacks with the challenge posed by the Sept. 11, 2001, terrorist attacks.

“There are a lot of parallels, there’s a lot of importance, and a lot of focus by us on disruption and prevention,” Mr. Wray said in an interview on Thursday. “There’s a shared responsibility, not just across government agencies but across the private sector and even the average American.”

Mr. Wray’s comments—among his first publicly since two recent ransomware attacks gripped the U.S. meat and oil-and-gas industries—come as senior Biden administration officials have characterized ransomware as an urgent national-security threat and said they are looking at ways to disrupt the criminal ecosystem that supports the booming industry. Each of the 100 different malicious software variants are responsible for multiple ransomware attacks in the U.S., Mr. Wray said.

What are your greatest concerns about cyber issues? Join the conversation below.

Ransomware is a type of malicious computer code that locks up a victim network’s files that hackers use to demand payment for their release, typically with digital currency like bitcoin.

This week, hackers held hostage the world’s largest meat processor, just weeks after the operator of an essential pipeline bringing gasoline to parts of the East Coast paid about $4.4 million to regain control of its operations and restore service.

Senior officials at the Federal Bureau of Investigation for years have likened the need to confront rising cyber threats to the post-9/11 scramble against international terrorism. But Mr. Wray said the wave of recent ransomware attacks has spotlighted the toll cyberattacks can have on all Americans.

“Now realizing it can affect them when they’re buying gas at the pump or buying a hamburger—I think there’s a growing awareness now of just how much we’re all in this fight together,” Mr. Wray said.

While the most prominent of the recent ransomware hacks disrupted gasoline deliveries and took meat-processing plants temporarily offline, they represent only a fraction of the some 100 types of ransomware the FBI is currently investigating, Mr. Wray said. “Those are just two,” he said, adding that each of those 100 different malicious software variants had affected between a dozen and 100 targets.

“The scale of this problem is one that I think the country has to come to terms with,” he said.

Complaints to the FBI and reports from the private sector show ransomware incidents have tripled in the past year, Mr. Wray said. While private-sector estimates of the toll to the U.S. economy vary widely, companies that track ransomware generally put the cost at hundreds of millions or billions of dollars annually and say it is rapidly increasing.

U.S. authorities have attributed this week’s attack on JBS SA, the world’s biggest meat company by sales, to a criminal ransomware gang in Russia, and the White House has said President Biden plans to bring up the problem during a summit with Russian President Vladimir Putin in Geneva planned for June 16. Mr. Biden said he would look closely at whether to retaliate against Russia for the attacks.

In the interview, Mr. Wray singled out Russia as harboring many of the known users of ransomware, providing a haven that security experts and U.S. officials have said has allowed criminal ransomware gangs to flourish throughout Eastern Europe.

“Time and time again, a huge portion of those traced back to actors in Russia. And so, if the Russian government wants to show that it’s serious about this issue, there’s a lot of room for them to demonstrate some real progress that we’re not seeing right now,” Mr. Wray said.

Mr. Wray, who has led the bureau since 2017, has about six years remaining in his 10-year term, and Mr. Biden has said he plans to keep Mr. Wray in the post. He has kept a low profile during his tenure, as the FBI faced criticism from former President Donald Trump, who publicly and privately contemplated firing Mr. Wray. In his few public appearances during the pandemic, Mr. Wray has pushed the private sector and international community to collaborate more with the FBI to battle hackers, including those from criminal gangs and foreign intelligence services seeking information from U.S. companies or institutions.

While the FBI has a policy of discouraging targets of such cyberattacks from paying the ransom, Mr. Wray said the agency was more interested in having companies cooperate with the bureau in their investigations into the attacks, to help piece together the puzzle of who was behind the attacks and figure out ways to thwart them.

On Thursday, Deputy Attorney General Lisa Monaco issued a memorandum to U.S. attorney’s offices around the country urging all ransomware investigations to be coordinated with a task force created in April.

Mr. Wray said coordination can pay off for ransomware victims and law enforcement alike. “I don’t want to suggest that this is the norm, but there have been instances where we’ve even been able to work with our partners to identify the encryption keys, which then would enable a company to actually unlock their data—even without paying the ransom,” he said.

—Dustin Volz contributed to this article.

Companies at Risk of Cyberattacks

Write to Aruna Viswanatha at Aruna.Viswanatha@wsj.com

A Lobster Diver Was Nearly Swallowed By Humpback Whale – NPR