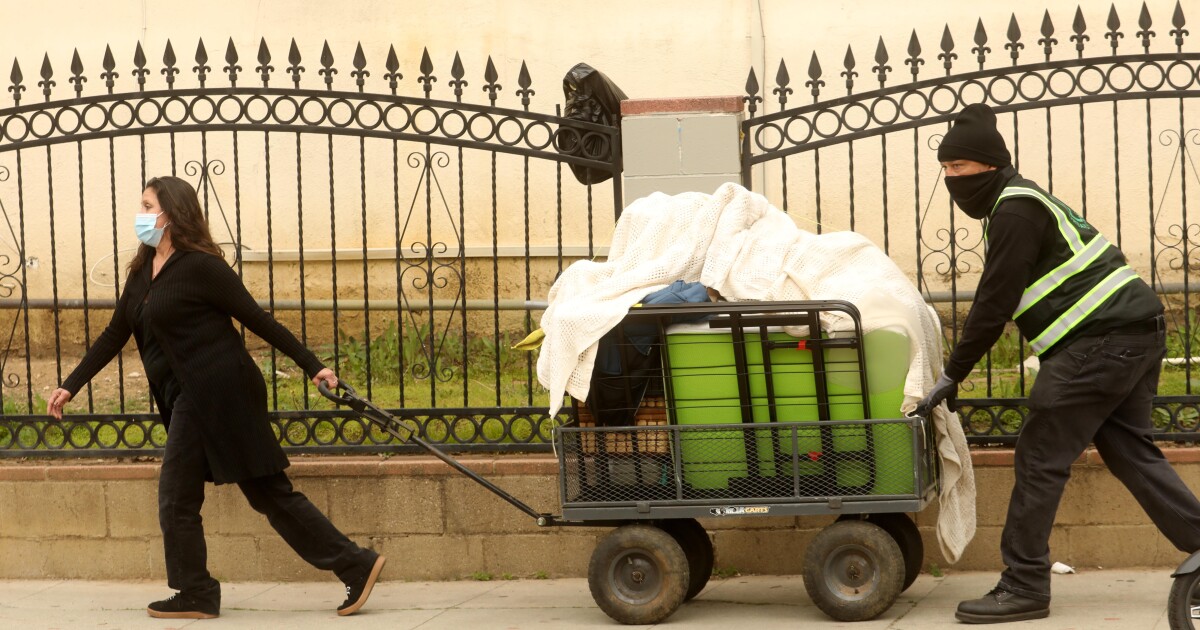 The last two holdouts of a homeless encampment at Echo Park Lake were arrested Friday morning, bringing an apparent close to a more than yearlong saga that saw as many as 200 people living in one of the city’s most scenic and beloved parks, building what they said was a better community for those without homes in Los Angeles.

Organizers with the group Ground Game LA, which advocates for homeless people, said they were informed by a Los Angeles Police Department officer that two residents of the park, Ayman Ahmed and David Busch-Lilly, had been taken into custody, which the LAPD later confirmed. An organizer with Ground Game later said the two had been released.

Earlier in the morning, Ahmed and Busch-Lilly said by phone that they believed they were the only people still there, with a third person coming in and out of the park, which had been closed to news media.

The decision to close the park and clear out the encampment sparked protests Wednesday and Thursday in the Echo Park area. Protesters, journalists and legal observers were detained after police issued a dispersal order, then blocked in the crowd. Authorities said 182 people were arrested for failing to disperse.

City officials posted notices on Wednesday night stating that the park would be closed the following evening so that crews could make repairs. Most of the people who had been living in the vast encampment, which included a communal kitchen and garden, had left as night fell Thursday. Residents of the camp had been warned they could be arrested for remaining after 10:30 p.m. Thursday.

“We were fully prepared and expected to get arrested last night,” Ahmed said in a phone interview before the Friday arrests. “So we’re just in a state of limbo right now. This is our home, so we’re not leaving till they kick us out.”

Workers from the nonprofit Urban Alchemy had walked the park, asking people if they wanted to go to hotel rooms. Since it started doing more intensive outreach in the park in February, the Los Angeles Homeless Services Authority said that as of Friday, more than 180 people at the park had been provided some kind of shelter, including 138 placed in the Project Roomkey program that provides hotel rooms. Ground Game LA provided hotel rooms for another 10 people, according to cofounder Ashley Bennett.

Others spent the night on the streets. Zach Coughlin, who walked away from the Echo Park encampment on Thursday loaded down with a heavy pack and rolling luggage, said he had spent the night outside City Hall East.

He and Karissa DeAngelis said they had been in a hotel room through Project Roomkey before, but had to leave after their room suffered water damage from a storm. Another group has offered them help getting an apartment, but so far they said they haven’t found a landlord willing to rent them a unit they can afford.

They turned down an offer to be taken to a new hotel room through Project Roomkey because they said their caseworker told them they would have to “start all over” in the housing process if they did.

“I’ve got our house on our back,” Coughlin said Thursday. “I guess we’re going to go back to what we did before.”

Ahmed said Friday morning that he refused to be “evicted from our lawful shelter,” arguing that amid the COVID-19 pandemic, he and fellow campers had created something better for unhoused people than Project Roomkey or the other shelter options offered by the city.

“What we’ve built is one of the solutions to homelessness,” he said. “The city just refuses to acknowledge it.”

Before the park was fenced off, the lakeside encampment had grown to nearly 200 tents and become a polarizing issue among Echo Park residents, some of whom joined homeless people in protest, others of whom applauded the decision to close the park, complaining of trash and criminal activity in a treasured patch of green space. City Councilman Mitch O’Farrell said this week that the park had become “a dangerous, chaotic environment for all users.”

Speaking to reporters at a vaccination center in South L.A. on Friday morning, Mayor Eric Garcetti framed the operation this week to close Echo Park as a success, saying that the city, along with LAHSA, was able to shelter many people who had been living at the lake and give them vaccinations, medication, meals and more.

“This is the largest housing transition of an encampment ever in the city’s history,” Garcetti said.

He reiterated comments he made earlier in week that the park had become “incredibly dangerous.” On Wednesday, when asked about the park, he pointed out that a Times reporter had witnessed a knife fight in the park between two homeless people.

“We can’t wait for somebody else to die before we take action,” Garcetti said.

However, he said that he wasn’t trying to “characterize everything as successful” about the crackdown at the park, which wasn’t announced officially until 24 hours before it occurred and included the arrests of numerous protesters and several reporters just outside the park.