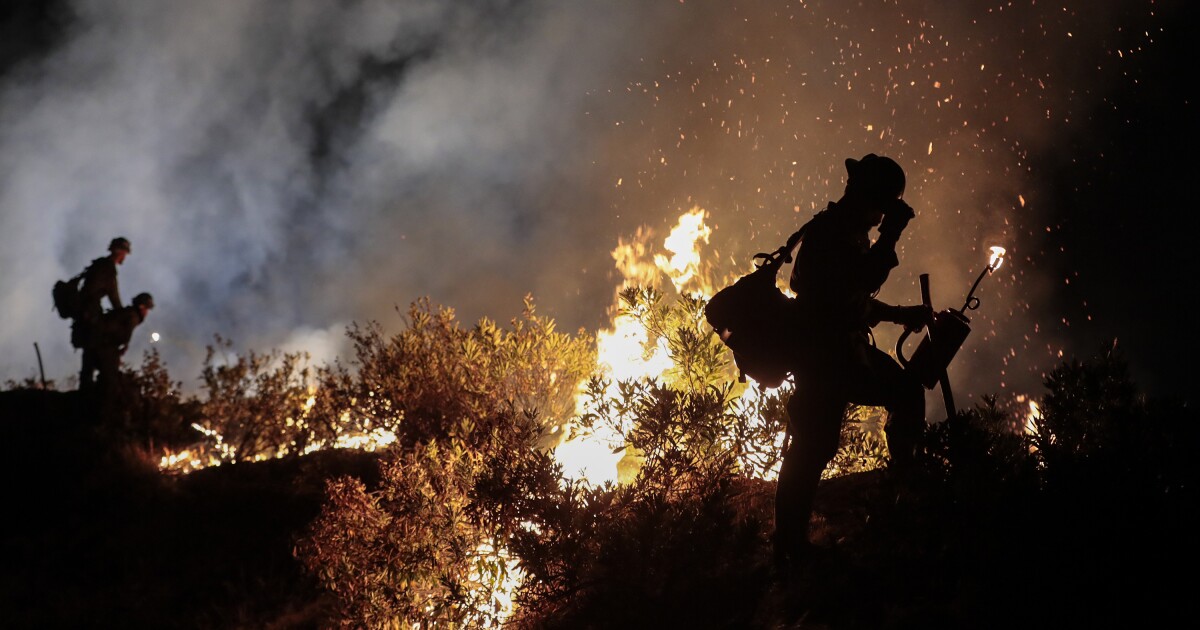 As another wildfire season looms over California, the U.S. Forest Service is running short of the most experienced and elite firefighters in the country — the forestry crews known as hotshots, who travel the nation putting out wildfires, according to interviews with union officials and agency employees.

A combination of low pay, competition from state and local fire departments and exhaustion from fire seasons that are longer and more devastating than in the past has eroded the federal government’s ability to hire new firefighters and retain the most skilled. Nowhere is this more true than in California, where entry-level Forest Service firefighters in certain parts of the state earn less than the minimum wage of $14 an hour, and staffing levels have plummeted ahead of a fire season that scientists say could be especially active.

Roughly 30% of the federal hotshot crews that work on the front lines of wildfires in California are understaffed, according to the union that represents most Forest Service employees. Some of these typically 20-person crews have lost so many veteran firefighters that the remaining workers have been assigned to lower-ranking Type 2 crews, which don’t require as much experience, union officials said.

In some parts of California, engine crews that are usually the first to arrive at wildfires, dousing them with water before they can grow out of control, have shrunk to the point where they can’t respond to calls seven days a week. In some cases, union officials said, fire engines are sitting unstaffed and unused.

With blazes already burning in California, Arizona and New Mexico, the shortfalls could make it difficult for the federal government to defend lives and homes throughout the West.

“We’ve known for years we were coming to a point where there was going to be a problem, and it’s manifesting itself this year. I haven’t ever seen staffing levels this low,” said David Alicea, a vice president of the Forest Service union in California.

“If all of California lights up like it did last year, we’ll have a major crisis,” he added.

Jon Groveman, a spokesman for the Forest Service in California, said the agency attempts to staff 46 hotshot crews in the state annually, but it hasn‘t been able to fill all of those positions for several years, leaving it with between 35 and 40 crews. The agency expects “a similar number of crews to be staffed this fire year,” he wrote in an email, adding that “some crews for various reasons (mainly due to staffing challenges) will not be able to attain Hotshot standards.”

“There are staffing challenges on an annual basis that we constantly adapt to,” Groveman wrote, adding that the agency could ask other federal, state and local fire agencies for help.

Forest Service leaders know they have a problem.

During a virtual town hall event held by the agency earlier this week, Agriculture Secretary Tom Vilsack and Forest Service chief Vicki Christiansen sought to reassure the federal wildfire workforce that they are committed to raising wages and rethinking work-life balance for employees who used to work limited fire seasons and now, because of warmer temperatures and widespread drought, are often fighting fires for most of the year.

The Forest Service is “looking at retention and recruitment incentives to be added, particularly in those areas … such as California, where we just are outcompeted by the state, the local and private sector,” said Christiansen, adding, “We know it’s a real issue.”

Veteran firefighters who’ve put in years with the Forest Service and the Bureau of Land Management can make two or three times as much money working for Cal Fire, California’s state agency, or local fire departments in Southern California and the Bay Area. Even Pacific Gas & Electric, the utility whose transmission lines have been blamed for sparking some of the state’s worse blazes, has lured away federal employees to its own firefighting force with better pay and benefits.

The disparities are just as stark for young people thinking of getting into firefighting. A first-year Forest Service firefighter earns a base wage of $13.45 an hour, less than he or she might make at a fast food chain in California or Washington state.

Although there are small cost-of-living increases in places like Los Angeles and San Francisco, as well as hazard pay and overtime, working a six-month fire season isn’t likely to net a rookie firefighter more than $30,000, according to Grassroots Wildland Firefighters, an advocacy group made up of retired and current federal firefighters.

A Forest Service job posting earlier this spring for a full-time, experienced firefighter in the Bridger-Teton National Forest in Jackson, Wyoming, warned applicants that real estate costs were high. It suggested a few affordable options, including Habitat for Humanity, the nonprofit home builder that helps low-income people get into new homes.

Ranbir Lally, a former federal firefighter who left in 2019 for a job with a Bay Area fire agency, said pay isn’t the only issue driving people away. State and local fire departments up and down the West Coast offer firefighters more flexible work schedules that allow them to spend time with their families and friends, or even take a vacation in the middle of summer.

Federal government firefighters “have to be available all summer in order to make a decent living, which puts a huge strain on your life,” Lally said. “I missed so many weddings and birthdays and important things in my family and friends’ lives because I was on fires.”

Steeped in a culture that values toughness and working long hours in difficult terrain without complaint, many federal firefighters have resisted speaking out about the low wages and months spent on the road or in remote wilderness. But the worsening staffing shortages and the record-breaking 2020 wildfire season, which put new stress on the agency, have led to louder calls for change.

Members of Grassroots Wildland Firefighters have found an audience among Western and Southwestern members of Congress, some of whom have been surprised to learn that firefighters trained in some of the most important front-line jobs are earning less than the $15-an-hour minimum wage Democrats have supported. The Government Accountability Office, a nonpartisan federal watchdog agency, recently agreed to study the federal government’s hiring and retention policies for firefighters.

“We have a real problem with recruiting, with morale, with retention, and it’s because we have not let the budget and the investment keep up with the scope of the problem,” said Orange County Rep. Katie Porter at a congressional hearing last month. Wondering at the difference in pay between federal and state agencies, she asked: “Why would anyone want to be a federal firefighter?”