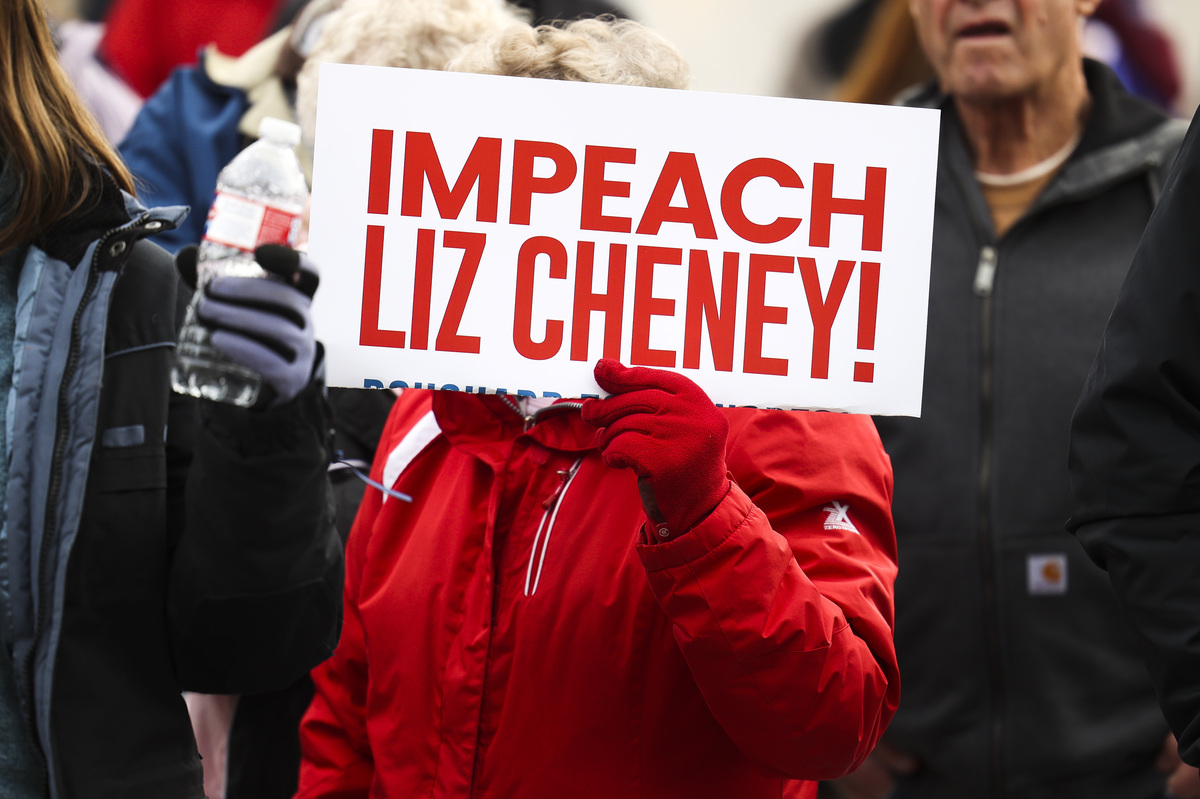 A woman holds a sign to impeach Rep. Liz Cheney, R-Wyo., during a rally late last month in Cheyenne, Wyo.

The House Republican Conference will meet in person on Wednesday and is expected to discuss the fates of Wyoming Rep. Liz Cheney and Georgia Rep. Marjorie Taylor Greene, two Republicans with drastically different loyalties to former President Donald Trump.

It’s a stark reminder of Trump’s continual hold on his party, even after many congressional Republicans condemned how he acted ahead of and during the insurrection at the U.S. Capitol on Jan. 6.

Trump’s actions that day earned him another rebuke from the House, the first time in history a president has been impeached twice. Ten House Republicans voted alongside Democrats to impeach him.

One of them was the No. 3 House Republican, Rep. Cheney, who said in a statement ahead of the vote: “There has never been a greater betrayal by a President of the United States of his office and his oath to the Constitution.”

But backlash against her was swift, with many in her party calling for her removal from leadership.

Trump loyalist Rep. Matt Gaetz, R-Fla., even went to Cheney’s home state and urged her constituents to vote her out.

And while House Minority Leader Kevin McCarthy has expressed support for Cheney, he also told Greta Van Susteren he has “concerns” over her impeachment vote.

“I do think she has a lot of questions she has to answer to the conference,” he said in an interview on Jan. 24.

Meanwhile, McCarthy is also under pressure to take action against Georgia Rep. Marjorie Taylor Greene, who has long embraced conspiracy theories and has a history of being racist and anti-Semitic.

Rep. Marjorie Taylor Greene, R-Ga., is seen here on the opening session of Congress on Jan. 3 with her “Trump Won” face mask pulled down. House Democrats are seeking to strip Greene from her committee assignments amid resurfaced inflammatory and offensive past statements. Pool/Getty Images hide caption 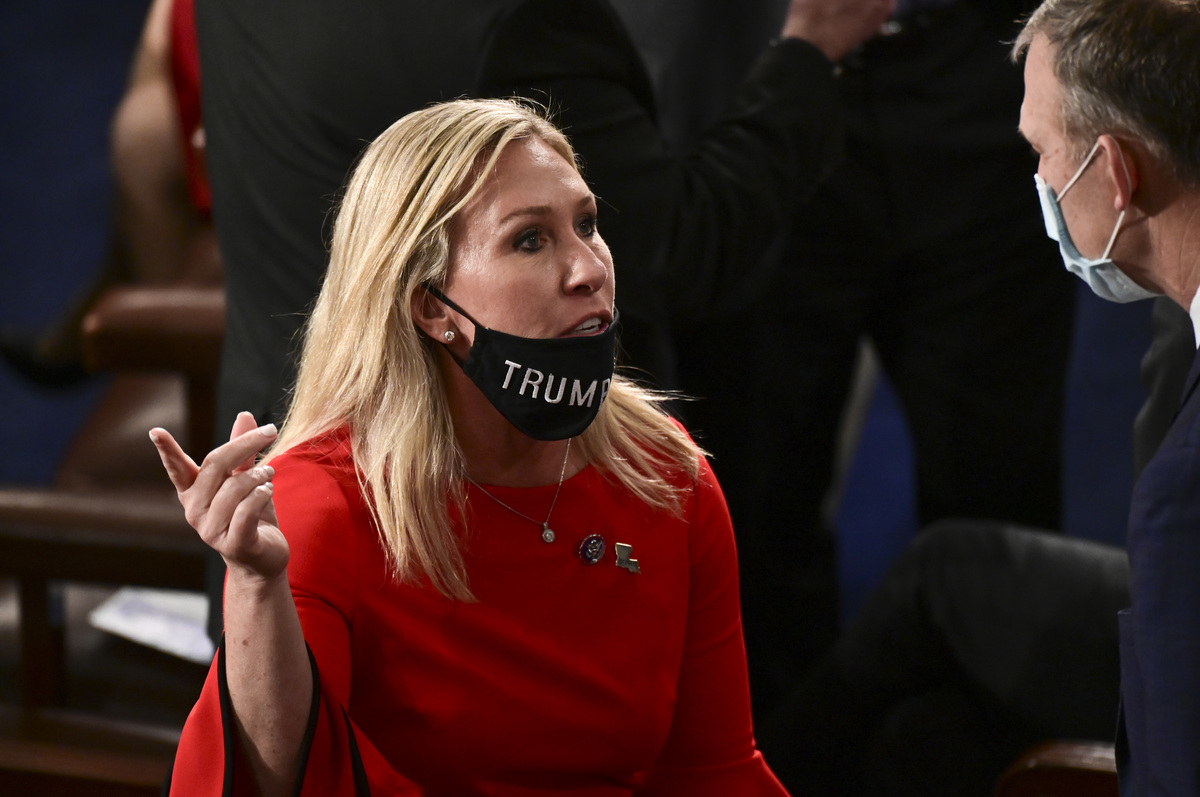 Rep. Marjorie Taylor Greene, R-Ga., is seen here on the opening session of Congress on Jan. 3 with her “Trump Won” face mask pulled down. House Democrats are seeking to strip Greene from her committee assignments amid resurfaced inflammatory and offensive past statements.

Democrats have pushed for her to be censured and have introduced a resolution to remove her from her committee assignments. In a short statement Monday that didn’t directly cite Greene by name, Senate Minority Leader Mitch McConnell, R-Ky., called “looney lies and conspiracy theories” a “cancer for the Republican Party.”

Sen. Mitt Romney, R-Utah., echoed that sentiment on Tuesday, telling Capitol Hill reporters that Republicans “should have nothing to do with Marjorie Taylor Greene.”

“It’s important for us to separate ourselves from the people that are in the wacky weeds, and if we don’t, then our opposition tries to brand us with their image and with their point of view,” he said.

McCarthy and Greene reportedly met on Tuesday evening, but no decision was announced.

How far McCarthy will go on disciplining Greene is unknown and once again, Trump is at the center of the political implications at play.

Greene has closely linked herself to Trump, tweeting Saturday that she had a “great call” with him.

Trump’s backing of Greene, whom he once called a “future Republican star”, could make it difficult for McCarthy, who recently met with Trump at his resort in Mar-a-Lago to discuss taking back the House in 2022, to mete out the robust action that Democrats and some Republicans are calling for.

Georgia’s District 14 Republican Party also came to Greene’s defense Tuesday. In a letter, the group called on McCarthy to keep the congresswoman on the House Education and Labor and Budget panels, writing that she “has broken no laws and done nothing illegal.”

Greene shared their letter on her Twitter page, tagging McCarthy and House Speaker Nancy Pelosi on the post.

Greene has used the controversy to raise funds: On Tuesday night, she tweeted: “I’m the Democrat mob’s public enemy number one” and “With your support, the Democrat mob can’t cancel me.”

I can’t thank you all enough for the outpouring of support I’ve received today.

I’m so honored to represent you, America First Patriots, in Congress.

A spokesperson from her office said: “The support from NW Georgia and across the entire country has been overwhelming. The People truly have Congresswoman Greene’s back because of her dedication to America First policies.”

Greene isn’t the only one fundraising off of the controversy. She is featured in a new series of ads launched by the Democratic Congressional Campaign Committee at various House Republicans who voted against Trump’s impeachment. The ad accuses the Republican lawmakers of standing “with Q, not you”, referencing the baseless QAnon conspiracy theory supported by Greene.

House Democrats have also introduced a resolution stripping Greene of her seats on the House Education and Budget committees, an aggressive step attempting to force McCarthy to act or face prospect of putting all his members on the record in a full House vote potentially later this week.

What about the upcoming Senate impeachment trial?

If there was any momentum on the Senate GOP side to convict Trump, it was in the immediate aftermath of the Capitol attack and it’s since dwindled significantly.

McConnell hadn’t indicated how he would vote after the trial, potentially giving cover to members in his conference more inclined to vote to convict.

“My interpretation of what happened with McConnell is that he very much would like to turn the page and move on from Trump and left the door open quite intentionally to see if there was the requisite amount of support to get rid of him,” says Brendan Buck, a Republican consultant who once advised former House Speaker Paul Ryan.

But an effort by Kentucky GOP Sen. Rand Paul forced his colleagues to go on the record over an element that many senators had said was weighing on their decision in the upcoming trial: Whether it is constitutional to try someone no longer in office.

The move was the equivalent of sending up a test balloon to see how other members in his conference would vote. Only five Republicans broke with their party to say such a trial would be constitutional. Democrats would need 17 Republicans to join them to convict Trump.

While some Senators have argued their vote on Paul’s motion doesn’t necessarily equate to their vote after the trial, the tea leaves seem clear: The Senate won’t convict Trump.

There are certainly political calculations at play here as well. Trump’s base is obviously a devoutly loyal one and crossing the former president so resolutely could bring with it an unwelcome political cost. Senators need only look at the House infighting with Trump loyalists and conservatives like Cheney.

“[Lawmakers] went out in their communities and they got an earful on their phones and emails from people that was a reminder to them that voters love Trump still nd there was no political upside to the crossing him,” Buck said.

He thinks Republicans will stick with Trump for the foreseeable future to win votes during their primaries, even if it costs national influence.