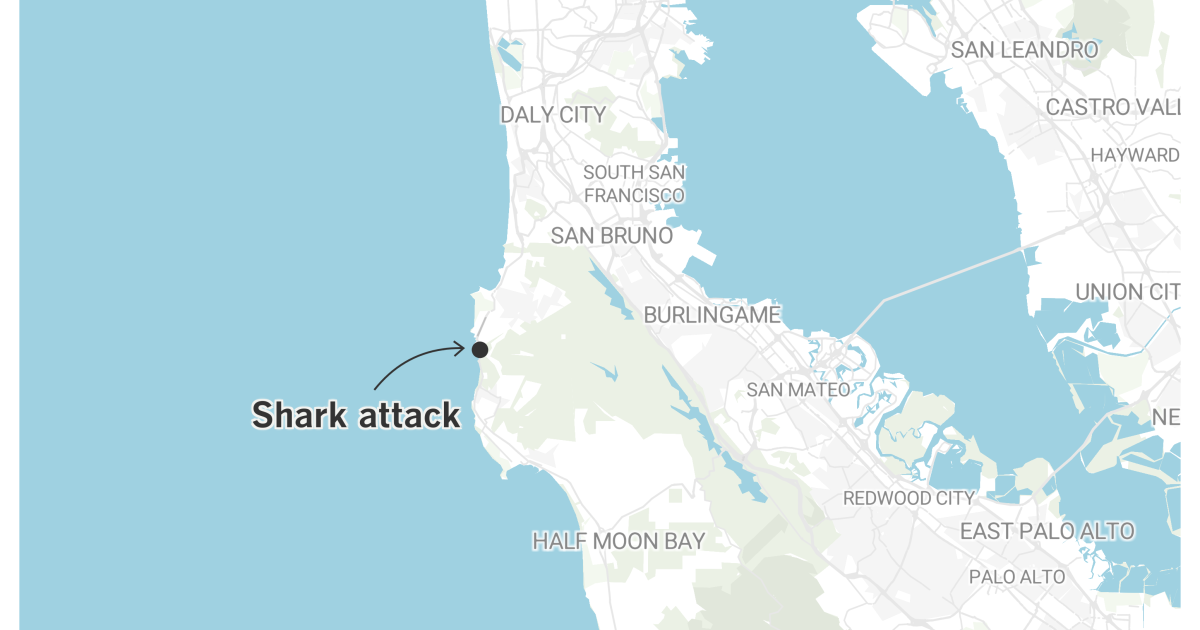 The bite victim, a 35-year-old man, was swimming in the Pacific Ocean off San Mateo County when he was bitten in his right leg around 9:15 a.m. by the shark, estimated to be 6 to 8 feet long.

“The male was able to swim to shore and medical aid was summoned,” the San Mateo County Sheriff’s Office said in a tweet, and he was taken to Stanford Hospital.

Firefighters said the man was in serious condition when he was taken to the trauma center and was treated with advanced life support measures.

The attacking shark was probably a juvenile. Great white sharks, also known as white sharks, are usually 4 to 5 feet long when born, and are deemed juveniles until they’re about 10 feet long, when they’ve reached maturity, according to the state Department of Fish and Wildlife. They can grow to as long as 21 feet.

“Scientists consider Southern California a nursery ground for white sharks. Pregnant sharks likely give birth in the relatively calm, warmer waters offshore and the juvenile sharks spend significant time in shallow water,” the Department of Fish and Wildlife says. “The juveniles feed on abundant stingrays and other small fish during warm water periods. As they grow and mature, the sharks move to other areas and colder water, where seals and sea lions are more abundant.”

Great white sharks are one of the ocean’s primary predators and play an important role in the ecosystem by eating seals and sea lions, according to the state. Officials say juvenile white sharks are often seen in shallow sea waters near the coast of Southern California, especially in the summer and when the ocean water is warm.

“There is only one guaranteed method for avoiding a shark attack: stay out of the ocean,” the state says on its website. “Scientists agree that most white shark attacks on humans are unintentional — where the shark mistakes the person for a seal or sea lion. Swimming in areas where sharks have been observed or where white sharks have been seen feeding on marine mammals is not recommended.”

A recent study published in the journal Scientific Reports said there has been an increase in observed juvenile white sharks in Monterey Bay, about 60 miles southeast of the site of Saturday’s shark attack.

Farther south, in Southern California, recent drone footage has shown that the presence of juvenile sharks is quite normal, and for much of the year, they are along the California coast from San Diego to Point Conception in Santa Barbara County.

Most surfers have long considered it improbable that a great white shark would be hunting at surfing spots. But the advent of drone photography has devoured that notion, showcasing just how often human swimmers and surfers come close to sharks. Yet few attacks happen, which demonstrates the extraordinarily low risk.

Notably, even as more people have headed into California’s surf over the decades — surfing, swimming and scuba diving — shark attacks have not increased proportionally, according to the Department of Fish and Wildlife.