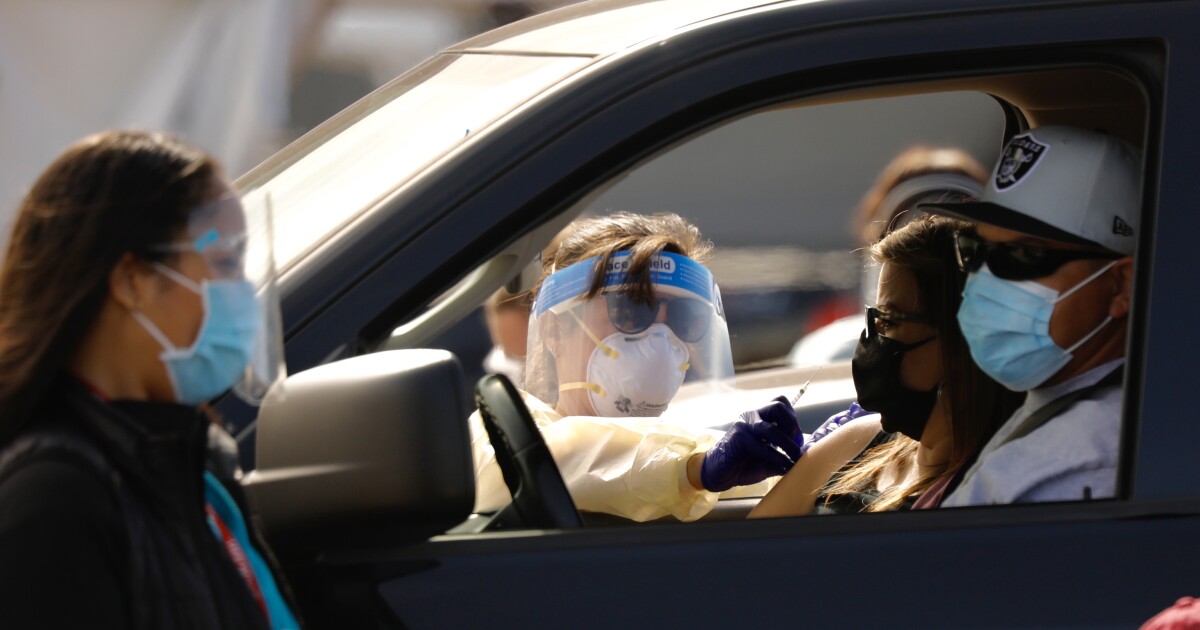 Gov. Gavin Newsom’s announcement Monday that the state would shift vaccine priority to an age-based eligibility structure has sparked concerns from groups representing some essential workers and disabled people who may now have to wait longer to get vaccinated.

Little has been shared as to what that would mean in practice. Before Newsom’s announcement, the state intended to give priority to several new groups after California is done vaccinating people 65 and older, including residents in incarcerated and homeless settings, essential workers and individuals with underlying health conditions.

It’s now unclear when those groups would be vaccinated.

Further details will be released as the state progresses through the current Phase 1B Tier 1, a spokesperson for the California Department of Public Health told The Times. But the timeline for when those currently eligible — long-term care facility staff and residents, healthcare workers and adults 65 and older — will be fully vaccinated continues to change as vaccine allocation numbers continue to shift.

State epidemiologist Dr. Erica Pan said last week that based on current allocation levels, it could take until June to vaccinate the state’s 6.6. million residents who are 65 and older. But as allocation increases, as is anticipated following an announcement from the Biden administration, that estimate will change.

On Tuesday, California Health and Human Services Secretary Dr. Mark Ghaly said that targeted outreach in order to reach people in vulnerable populations would be based on exposure as well, not just age, but did not elaborate on that specific formula.“

“I do think that younger individuals who are in professions or are in situations where they aren’t as exposed as some of the other high-exposure industries will end up waiting a little longer than others who have either high risk or high exposures to COVID-risk factors,” Ghaly said. “So there of course, is going to be some sectors of our population that don’t come to the front of the line as quickly as some others.”

Details about how people with underlying health conditions or disabilities will be factored into the state’s guidance has been an ongoing point of concern from advocates and member of the state vaccine advisory committee.

Imparato said he would like to hear a clear commitment from the governor to explicitly work with the members of the disability community in order to factor them into the state plan. Those younger than 65 who are most vulnerable are individuals with disabilities who are included in multiple marginalized groups, such as Black, Latino and Native American communities, he said.

Officials at the California Transit Assn. sent a letter to Newsom urging him to prioritize mass transportation employees, noting that they are essential to helping people get people around and face a heightened risk of getting COVID-19.

In the letter, Executive Director Michael Pimentel noted that transit agencies have helped transport other essential workers to and from their jobs as well as low-income and older residents who need to get supplies and go to medical appointments.

Bob Schoonover, president of Service Employees International Union Local 721, said the shift to age-based decisions over occupational risks in the next tier runs counter to research that shows workplaces are a major source of the spread.

“Millions of working Californians, most of them people of color, have no choice but to leave their homes and work each day, exposing themselves, their families, and their communities to COVID-19 and its devastation,” Schoonover said in a statement.