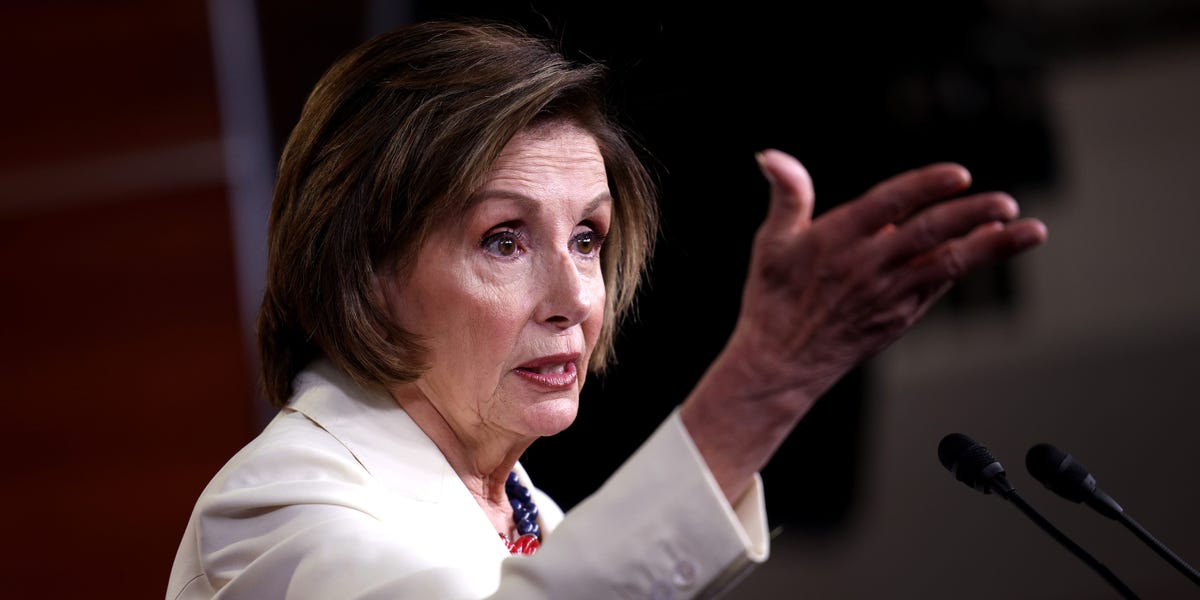 Democrats approved the budget blueprint in a 220-212 vote with every Republican in opposition. They relied on a procedural maneuver packaging multiple measures together, including a rule setting debate boundaries, and votes on a voting-rights bill and the bipartisan infrastructure bill.

“Passing this rule paves the way for the Building Back Better plan, which will forge legislative progress unseen in 50 years — that will stand for generations alongside the New Deal and the Great Society,” House Speaker Nancy Pelosi said in a floor speech ahead of the vote. “This legislation will be the biggest, and perhaps the most controversial, initiative that any of us have undertaken in our official lives.”

Republicans blasted the bill as a hefty package laden with wasteful progressive priorities. “It really should be called the ‘Mountains of Debt For the Children Act’ because that’s what it does,” Rep. Steve Scalise said.

The vote capped a remarkable showdown between Pelosi and a bloc of 10 Democratic moderates that tested the California Democrat’s prowess in steering her ideologically diverse caucus through its slim three-seat majority and nearly stalled Biden’s economic agenda. It may also foreshadow the fierce intraparty fights to come, given that the vote was only to unlock another step in the reconciliation process, not approve completed piece of legislation.

Reconciliation is a tactic used to pass certain bills with only a simple majority vote. But in a 50-50 Senate, the procedure requires all 50 Senate Democrats to stay united so it garners a tie-breaking vote from Vice President Kamala Harris.

Filling in the details is expected to stretch on for many weeks and could spark more fights between progressives and moderates with competing priorities on tax hikes, healthcare, and the social safety net. To quell the centrist revolt, Pelosi committed to passing an infrastructure bill by September 27.

The moderate faction led by Rep. Josh Gottheimer of New Jersey rebelled earlier this month and demanded the House first pass a $1 trillion infrastructure bill focused on roads and bridges before they would consider backing the partisan spending plan.

Read more: From free community college to higher taxes on the rich: How the $3.5 trillion plan House Democrats just passed would affect you

For nearly two months, Pelosi dug in on her insistence that the House would vote on the bipartisan bill only after the Senate passed a separate Democrat-only spending package sometime this fall. The progressive Rep. Ilhan Omar of Minnesota called the clash between Pelosi and the moderates was a “s— show.”

“I don’t understand what they were expecting to achieve,” Omar told reporters, adding that she believed the moderates had weakened their bargaining power because they didn’t get the immediate infrastructure vote they sought.

Pelosi’s maneuver was intended to force House progressives to support an infrastructure bill they had assailed as insufficient and prod moderates into endorsing the larger social-spending package. But it triggered opposition from some centrist Democrats who said it was unnecessary to delay a bill that would provide funding to repair roads, bridges, highways, and strengthen broadband connections.

The party-line spending plan would expand Medicare, set up a national program for paid family and medical leave, tuition-free community college, a child allowance, and initiatives to address the climate crisis. Democrats also intend to include a pathway to citizenship for some immigrants living in the US without authorization.

One priority among Democrats is extending a temporary child allowance to at least 2025 as initially laid out in Biden’s spending plans. The vast majority of American families qualify to get monthly checks from the federal government for children under 17.

“We’re talking, I keep pushing for permanence but we’ll see where it goes,” Rep. Rosa DeLauro, chair of the House Appropriations Committee, told Insider about the expanded child tax credit.