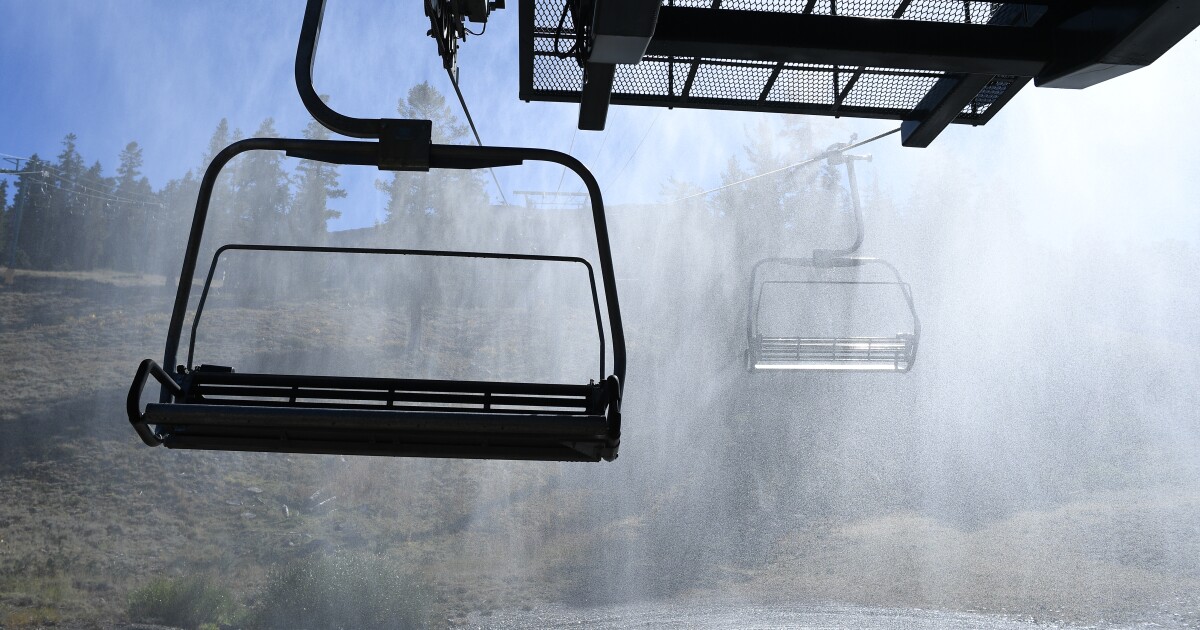 Things looked grim for South Lake Tahoe as the Caldor fire barreled toward the treasured resort community this week.

The fire spotted over a granite ridge that officials had hoped would keep flames from spreading into the Tahoe Basin. Forecasters warned of gusty winds and bone-dry conditions that could push it further toward populated areas, raising fears of an urban conflagration. Tens of thousands of residents and visitors fled, gridlocking traffic along Highway 50.

But the danger appeared to have largely abated Saturday, as authorities said the fight against the 214,112-acre blaze seemed to have turned a corner. The fire is now 43% contained.

Firefighters had carved containment lines around more than a third of the blaze. They credited a combination of aggressive firefighting tactics, improved weather conditions and past efforts to prepare the landscape for wildfire.

“If we would have had the same weather and fire behavior continue for two more days, we would have had a real problem,” said Dominic Polito, a public information officer on the fire. “So there was a little bit of divine mercy.”

“It’s no longer burning miles upon miles in a single 12-hour period, and that just had to do with the change in weather,” he said.

Although it was too soon to say South Lake Tahoe was completely out of the woods, authorities were cautiously optimistic, said Capt. Parker Wilbourn, another public information officer on the fire.

There were still some areas of concern where crews were working to ensure flames would not slop over containment lines, including the Christmas Valley and Kirkwood areas, as well as portions of the Heavenly area, he said.

He ticked off the factors that played into the improved prognosis. Some of it was terrain: a portion of the fire’s northern flank reached granite around Pyramid Peak in the Desolation Wilderness, depriving it of fuel to burn, he said. Some of it was luck, as it always is.

Some of it, he said, was the weather: the winds were not quite as fierce as initially forecast and subsided further midweek.

“A decrease in wind, decrease in temperatures and increase in humidity have all played to our advantage over the past two to three days,” Wilbourn said. “We’ve used that time to bolster our containment lines and start putting crews directly on the front lines for a firefight.”

Officials also noted the return of an inversion layer that helps to keep the sun from heating vegetation and the fire from sending up a plume of heat and smoke, effectively putting a lid on its activity: “Because if the smoke can’t leave, it means the fire can’t breathe,” Polito said.

“They’ve had a forest clearing initiative for the last nine to 10 years that really cleared out that fuel load,” he said, crediting the U.S. Forest Service with completing both prescribed burns and vegetation thinning operations.

The Forest Service partnered with the Sierra Nevada Conservancy on a project that called for 8,800 acres to be burned in the Caples Creek drainage over 10 to 15 years starting in 2017. The project included the 3,435-acre Caples prescribed burn in 2019, which was declared a wildfire after winds picked up and it burned at a higher intensity than intended, requiring suppression resources to be called in.

Like many Western U.S. forests, the watershed once benefited from frequent, low-intensity fires caused by lightning and Indigenous burning practices, experts say. But after colonization and aggressive fire suppression tactics upended that cycle, with the imbalance compounded by drought and climate change, the forest there was infilled with smaller trees and understory vegetation that increased drought stress on larger trees, according to the Forest Service. These so-called ladder fuels can also carry fire up into the canopy, helping it burn hotter and spread more quickly.

By thinning tree density and reducing the amount of smaller trees and vegetation, authorities had hoped to lessen the intensity of future wildfires that moved through the area.

The Caldor fire served as the project’s first real test, and experts have been closely monitoring the outcome.

Wilbourn said it appears to have played a role in significantly slowing the fire’s spread in some areas, helping crews to catch it. He pointed on the perimeter map to a pocket of green in the southern finger of the fire that overlapped with part of that prescribed burn, as well as other treatments he said had been performed in the Kirkwood area.

“If you look at any of the fire maps, there’s a big gap between Kirkwood and Tahoe,” said Kocher, who was forced to evacuate her Meyers, Calif., home Monday. “That’s Caples.”

She said that due in part to its allure, the Tahoe area has been more successful than many parts of the Sierra in attracting resources for such projects.

The Tahoe Fire and Fuels Team, a multiagency coalition formed after the damaging Angora fire in 2007, said it has performed 65,000 acres of fuel reduction work in the Tahoe Basin over the past 13 years. The group also helps neighborhoods prepare for fire.

In a recent community briefing, Rocky Oplinger, an incident commander, described how such work can assist firefighters. When the fire spotted above Meyers, it reached a fuels treatment that helped reduce flame lengths from 150 to 15 feet, enabling firefighters to mount a direct attack and protect homes, he said.

“It takes both fuels reduction and active suppression in an environment like this to help the community and the forest survive,” Kocher said.

There’s not yet word on the cause of the Caldor fire, which started Aug. 14 about four miles south of Grizzly Flats and eventually decimated the town. About 55,000 people had been forced from their homes as of Friday, but that number had dropped by Saturday as some were able to return, authorities said. The fire had destroyed 687 homes and 18 commercial properties, with damage assessments 75% complete, Wilbourn said.

Firefighters were able to save homes in Christmas Valley and Meyers using a combination of tactics Polito described as fairly typical. First, authorities estimated where the fire was likely to travel based on the weather and topography. Then, crews went out to those areas and prepared structures by removing log piles, lawn furniture and brush to give embers fewer opportunities to take hold.

Once the fire arrived, they did what’s called a “fire front following,” Polito said.

“It’s impossible to stop a big fire from coming through, but what we can do is position ourselves on the roads in vehicles and in what we call safety zones,” he said. “Then as the fire comes through and starts to ignite all the fuels, we will follow it from behind and put out the different fuels that are near the structures.”

They also lit backburns to eliminate fuel between the communities and the fire, he said.

Firefighters were further helped by the fact that residents evacuated quickly, allowing crews to focus on saving homes rather than people, Polito said.

“Because that fire came so fast, if people would have been dragging their feet and blocking the roads, we couldn’t have saved all those homes,” he said.