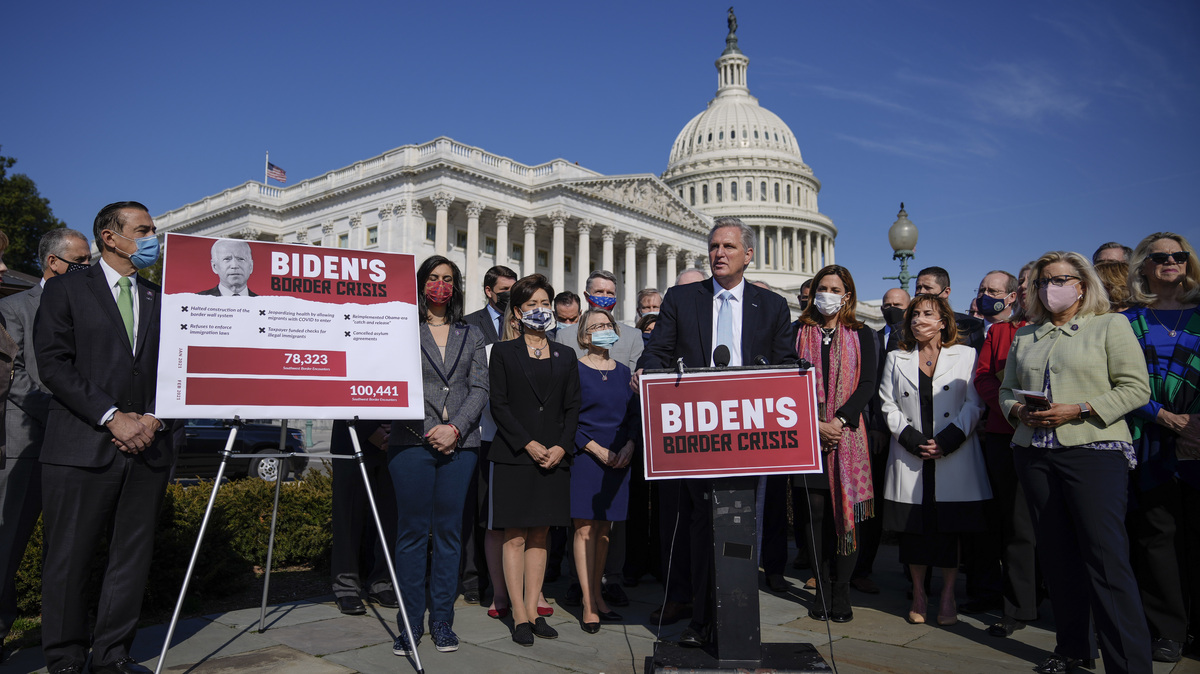 House Minority Leader Kevin McCarthy, R-Calif., speaks during a news conference about U.S.-Mexico border policy outside the Capitol on Thursday. McCarthy leads a delegation to the border on Monday.

House GOP leader Kevin McCarthy on Monday leads a group of Republican lawmakers to the U.S. southern border in Texas amid a jump in the number of migrants showing up at the border, especially unaccompanied children.

“This crisis at the border is spiraling out of control,” McCarthy told reporters last week. “And it’s entirely caused by the actions of this administration.”

The California Republican sent a letter to President Biden in early March requesting to meet with him to discuss the increasing number of migrants at the border and to “work together to solve it,” but he said he hadn’t gotten a response.

McCarthy’s trip comes as the Biden administration grapples with a surge in children arriving at the border without their parents, leading to record numbers of minors being held in warehouse-like detention facilities run by U.S. Customs and Border Protection. They’re supposed to be moved quickly to more appropriate shelters run by the Department of Health and Human Services.

On Saturday evening, the Department of Homeland Security announced that over the next 90 days, the Federal Emergency Management Agency will help process the high levels of unaccompanied migrant children.

“Our goal is to ensure that unaccompanied children are transferred to HHS as quickly as possible, consistent with legal requirements and in the best interest of the children,” Homeland Security Secretary Alejandro Mayorkas said in a statement.

Mayorkas may be asked about the situation on the border on Wednesday morning, when he’s scheduled to testify virtually in front of the House Homeland Security Committee on “the way forward on homeland security.”

Pathways to citizenship for various groups

Amid the focus on the southern border, congressional Democrats are mobilizing on several pieces of legislation that would construct a pathway to legal status for millions of people living in the country.

This week the House will begin consideration of two bills aimed at amending the immigration system, according to the office of Majority Leader Steny Hoyer, D-Md.

The House will also consider the Farm Workforce Modernization Act, which would create a system in which a worker in the agricultural industry could earn temporary status with an eventual option to become a permanent resident. It also would amend the existing H-2A temporary agricultural worker visa program.

Both bills have strong support from Democrats and passed the lower chamber in 2019.

They represent a more targeted approach at passing immigration legislation than Biden’s comprehensive immigration proposal — the U.S. Citizenship Act of 2021 — which could face significant opposition among Republicans in the Senate.
Source Link