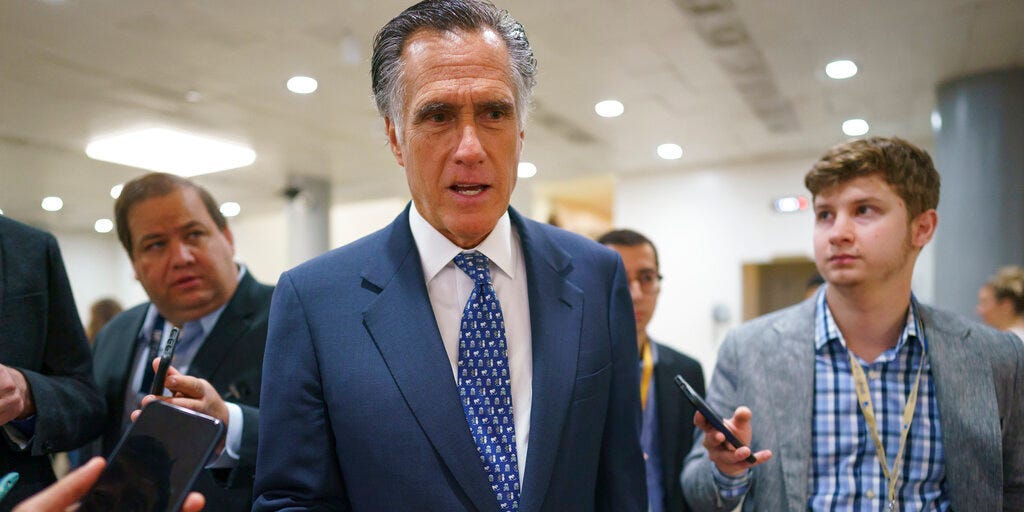 Republicans and Democrats are eyeing an increase to the gas tax as both parties enter a chaotic last-ditch effort to strike a bipartisan infrastructure deal after a month of failed discussions between President Joe Biden and Senate Republicans.

The bipartisan group is in the early stages of assembling a plan they hope will draw at least 60 votes in the evenly divided Senate. The cohort is equally split between Republicans and Democrats.

It includes Republican Sens. Mitt Romney of Utah and Rob Portman of Ohio, as well as Democratic Sens. Joe Manchin of West Virginia, Kyrsten Sinema of Arizona, and Jon Tester of Montana. The group emerged after Biden pulled the plug on negotiations with Sen. Shelley Moore Capito of West Virginia, who had been Republicans’ chief negotiator since April.

Romney told Insider on Thursday that the new working group was weighing indexing the gas tax to inflation. The $0.18 levy hasn’t been raised since 1993. “It keeps it at the same value that it has today,” the Utah Republican said.

The White House previously said bumping the gas tax was off limits, given Biden’s pledge to not hike taxes for households earning less than $400,000. It did not immediately respond to a request for comment.

But the idea gained some momentum among Democrats when Sen. Dick Durbin of Illinois, the second-ranked Democrat in the chamber, said he believed it “ultimately has to happen.”

“I look at it as a user fee. We pay taxes on gasoline because we want to drive our cars on safe roads,” Durbin told reporters.

Still, other Democrats in the group, like Tester, appeared noncommittal. “It’s not one of my favorite things, but we’ll see what the entire deal looks like,” he said in an interview. “I got to see it in the context of everything, see what stays in and drops out.”

Sen. Mark Warner of Virginia, another Democrat in the group, declined to answer whether he supported it, a sign of the delicate state of the negotiations. “I actually think it’s better … until the cake is fully baked, to keep the ingredients quiet,” he told Insider.

Seth Hanlon, a tax expert and senior fellow at the left-leaning Center for American Progress, projected that indexing the gas tax to inflation would generate between $30 billion and $35 billion over a decade.

“It would be borne by consumers,” Hanlon told Insider. “We could get roughly the same revenue by rolling back the 2017 corporate tax cut by a fraction of a percentage point.”

He added that indexing the gas tax could have “modestly positive environmental effects,” but not if it’s paired only with spending focused on physical infrastructure and it omits climate.

Biden’s two-part economic plan amounts to $4 trillion in new spending on physical infrastructure like roads and bridges, as well as caregiving, cash payments, universal pre-K, community college, and a wide variety of measures.

Both parties remain far apart on the scope of an infrastructure bill and how to pay for it. Other Republicans are increasingly signaling that climate provisions won’t be included in their package.

Biden, along with congressional Democrats, are pushing clean-energy tax incentives, a national system of charging stations for electric vehicle, and federal funds to retrofit homes.

“If they’re looking for a line item that says ‘climate,’ they’re not going to see that,” Sen. Lisa Murkowski of Alaska said of Democrats.

A few Senate Democrats have stepped up their criticism of the bipartisan talks in recent days, saying that such talks risk omitting measures to combat the climate crisis in an infrastructure deal. Another top Democrat threatened to withhold his vote if climate wasn’t sufficiently addressed.

“On a big infrastructure bill, to pass on climate altogether? No way,” Sen. Ron Wyden of Oregon, the chairman of the Senate Finance Committee, told Insider. “Think I’m blunt enough? No way.”