Dylan Costello (right), 25, and 28-year-old Bobby Manson, construction workers from Quincy, Mass., are all in for Trump but say they don’t support what the rioters did on Wednesday. Tovia Smith/NPR hide caption 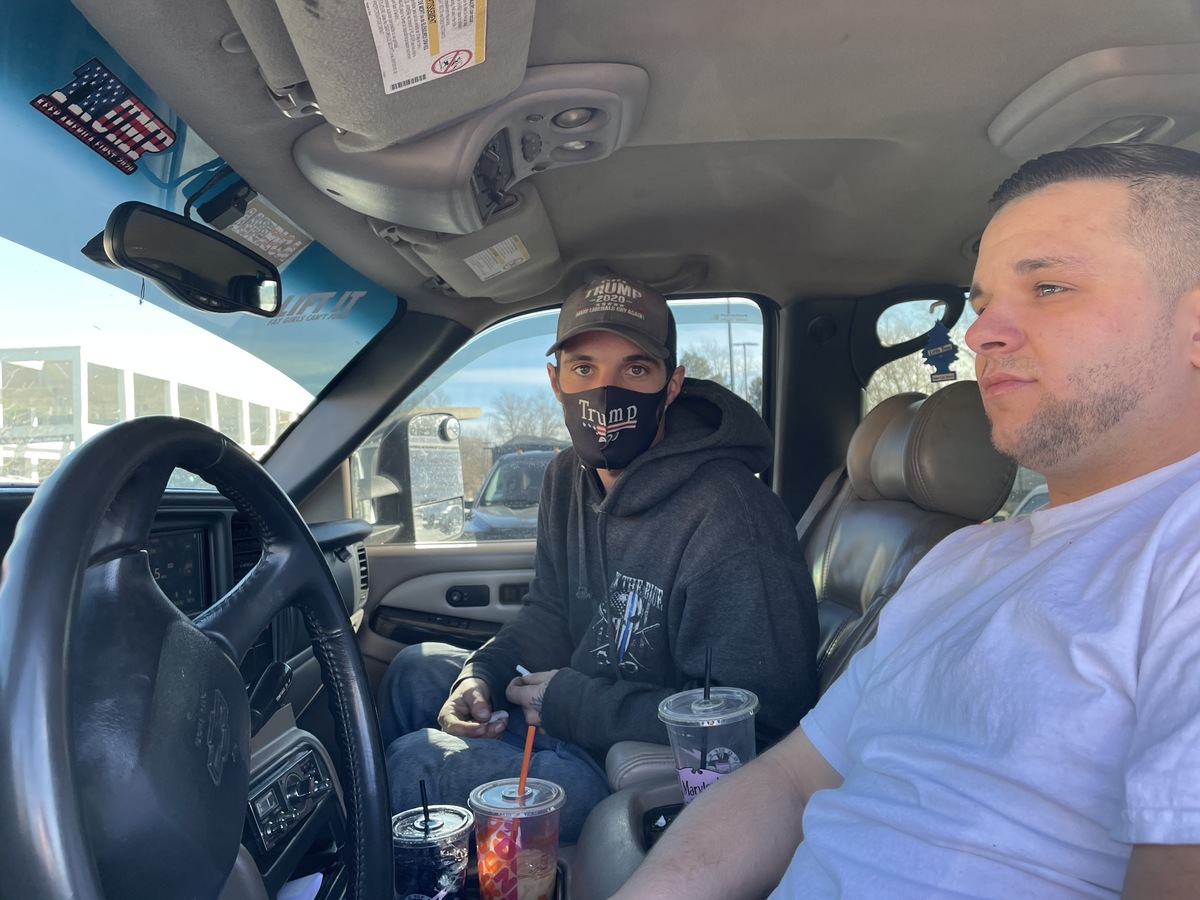 Dylan Costello (right), 25, and 28-year-old Bobby Manson, construction workers from Quincy, Mass., are all in for Trump but say they don’t support what the rioters did on Wednesday.

The riots and President Trump’s behavior are straining some voters’ support.

Dylan Costello and Bobby Manson, both construction workers from Quincy, Mass., are big Trump supporters with Trump face masks, hats and stickers on their truck.

“We have some Trump flags here too, but I can’t pull it out because it has some swears on it,” Manson said with a chuckle. Though as much as he’s pro-Trump, the 28-year-old said he doesn’t condone what Trump supporters did at the U.S. Capitol on Wednesday.

“They should have never done that,” Manson said. “It’s like making Trump look like a bad person, and he’s really not — they made him look bad.”

Manson credits Trump for eventually tweeting that people should leave the Capitol and go home, though Costello is quick to add that Trump’s tweets were also egging rioters on, trying to play both sides.

“He played one side — they [played] the other when everything went down,” Costello said.

But the bottom line is that Manson and Costello sympathize with Trump and believe the president’s baseless claims that the 2020 election was rigged and that President-elect Joe Biden won because of widespread voter fraud. The friends share the protesters’ frustration that gave rise to the assaults, break-ins and vandalism at the U.S. Capitol on Wednesday.

Thousands of pro-Trump extremists descended on Washington, D.C., and plunged into chaos and violence as they stormed into the Capitol. The protests were timed to coincide with Congress’ certification of the Electoral College votes and were aimed to pressure Republican lawmakers into supporting Trump’s effort to overturn Biden’s electoral victory.

The violent confrontations ended with a lockdown, four casualties and at least 52 arrests. D.C. Mayor Muriel Bowser imposed a curfew on Wednesday as police worked to secure the perimeter around the Capitol, and she also issued an order to extend the city’s public emergency for 15 days, to a day past Inauguration Day, which is on Jan. 20.

“We would protect ourselves, but we wouldn’t go out and attack somebody,” she said. “That’s not what conservatives do.”

Nutter believes the Republican Party will change after these protests and riots.

“I think it’s going to become the party of Trump because it’s more conservative and more constitutional,” she said. “We need to get back to the Constitution.”

Nutter’s friend Jane Ochs, who is 78 and retired, agrees.

“It was antifa storming the Capitol,” she said. “It’s just a shame that they had to do this to Trump. He’s been maligned for four years now, and to have this happen at the end of his presidency, the man doesn’t deserve it.”

Jeffrey Stroehmann is a Trump supporter from rural central Pennsylvania. He traveled to Washington and participated in the protests. His intention, he said, was to march peacefully, but once he was there listening to Trump in the crowd, he surprised himself as he felt his rage boiling over.

“There I was to a different level of protest, vocalizing more, and pent-up frustration starting to pour out,” he said.

Ahead of the scheduled protest, Oren Segal, an extremism expert with the Anti-Defamation League, expressed concern about nonviolent Trump supporters getting “wrapped up in the tactics and violence of the extreme fringes” because they are at a protest at the same time.

In Colorado Springs, Colo., Gabriel King, a floor installer, believes Trump was robbed of four more years last November, and he said he’s actually happy about the mayhem in the nation’s capital.

“It’s hard to see it happening, but I’m tired of being bullied by the scum in D.C.,” King said, adding that the events at the Capitol may have been the wake-up call lawmakers needed.

“They’re not accountable to anyone,” he continued. For King, lawmakers are “just criminal trash” who lie about everything. “Thank God someone finally did something.”

But for other Trump supporters, Wednesday’s insurrection was the final straw.

Carol Jones, from Franklin, Tenn., said she voted for Trump, but after seeing his behavior since the election and Wednesday’s chaotic riots, said she’s full of contempt.

“I don’t understand it, other than a humongous ego that he had a need to satisfy,” Jones said. “I think it’s really sad.”

Randy Dittmer, from Liberty, Mo., is fed up with Trump too. The 62-year-old retired schoolteacher said he watched the rioting on TV in disbelief, unable to believe it was happening in the United States.

Dittmer said he never imagined he would witness this type of mob attack on U.S. soil, though he acknowledges that polarization has been brewing for more than four years in the country.

“I lay the blame straight on the president of the United States,” he said, adding that Trump had plenty of help from Republicans who have enabled him instead of focusing on more pressing issues such as coronavirus vaccine distribution and social disparity. Dittmer said he hopes some Republicans speak out now.

Several people went further, comparing Trump to a cult leader, whipping people up into a fervor and manipulating them to do anything Trump says.

George Lowery, a retired truck driver from Washington state who voted for Trump, said people can be gullible and believe Trump when he says dead people voted, for instance.

“People get people so stirred up,” Lowery said. “I mean, you’ve got to be careful listening to one talking head and getting so emotional over it. I would say, ‘Fear God, not man.’ ”

Sylvia Cervantes, from Laredo, Texas, said that as turned off and disappointed as she is with the chaos and violence at the Capitol, she’s still supporting Trump and leaving the judgment to God.

“I’m peaceful. I’m not going to carry a torch and start torching buildings — that is not right no matter what,” she said. “All those people, when they die, will have to face God and pay for their sins.”

Once the Capitol was secured by law enforcement late Wednesday, legislators went back in and continued the certification process, and Biden was certified as the next U.S. president on Thursday morning.
Source Link