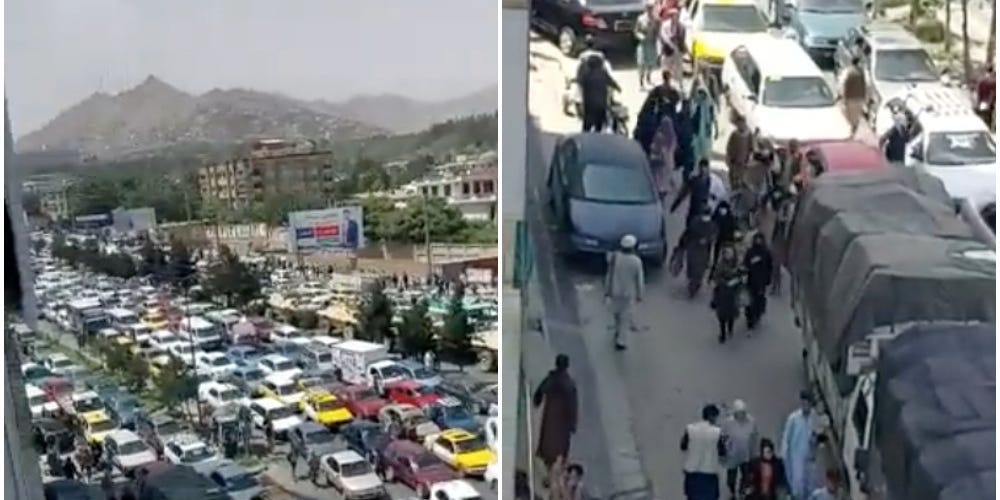 Scenes of chaos are emerging from the Afghan capital Kabul amid news that the Taliban is set to take over the government, according to multiple reports.

Taliban fighters surrounded Kabul on Sunday and sought the unconditional surrender of the central government.

The Afghan government has signaled there were negotiations underway to avoid bloodshed in Kabul and to transition power, according to the Associated Press.

Photos and videos on social media show Kabul in gridlock as thousands of people try to get out of the city.

Ali Latifi, a resident of Kabul, told Insider that the streets of the city had been packed all morning as residents panicked about the Taliban’s imminent entry.

“There was a big panic in the people who were out on the streets. You could see literally hundreds and hundreds of people suddenly running in different directions.”

“People were hoping to stop a cab, hoping to go somewhere, calling their relatives, stores were closing. I live above a bank. When I went downstairs, there were lines out the door. A lot of the ATMs didn’t have cash.”

According to The Guardian, workers are fleeing the government offices, and smoke rose over the city as embassy staff burned important documents.

Women are lining up at cash machines to withdraw their life savings, AP reported.

CNN’s international correspondent, Clarissa Ward, tweeted that people are desperately trying to prepare for the takeover, which she says “does not appear imminent.”

One picture posted by NBC’s chief foreign correspondent, Richard Engel, shows a group of Afghans crowding a visa processing center to get last-minute visas to the United States.

“Many came up to me crying,” Engel posted alongside the image.

Sayed, an Afghan resident, told The Guardian earlier today that he witnessed “women crying by the side of the road.”

“People are afraid. They are fearful for their families, their wives, and their daughters especially,” Sayed said.

Latifi told Insider that the city was now calmer and streets were deserted as residents wait to see the outcome of Taliban negotiations with the government.

“Now everyone is waiting to see who the new government will be,” he said.

A spokesperson for the Taliban said: “We will respect rights of women…our policy is that women will have access to education and work, to wear the hijab,” according to The Guardian.

He restated the Taliban’s position that “no one should leave the country…we need all the talents and capacity, we need all of us to stay in the country and participate.”

Read more: Why the US-trained Afghan National Army have been defeated with ease by the Taliban