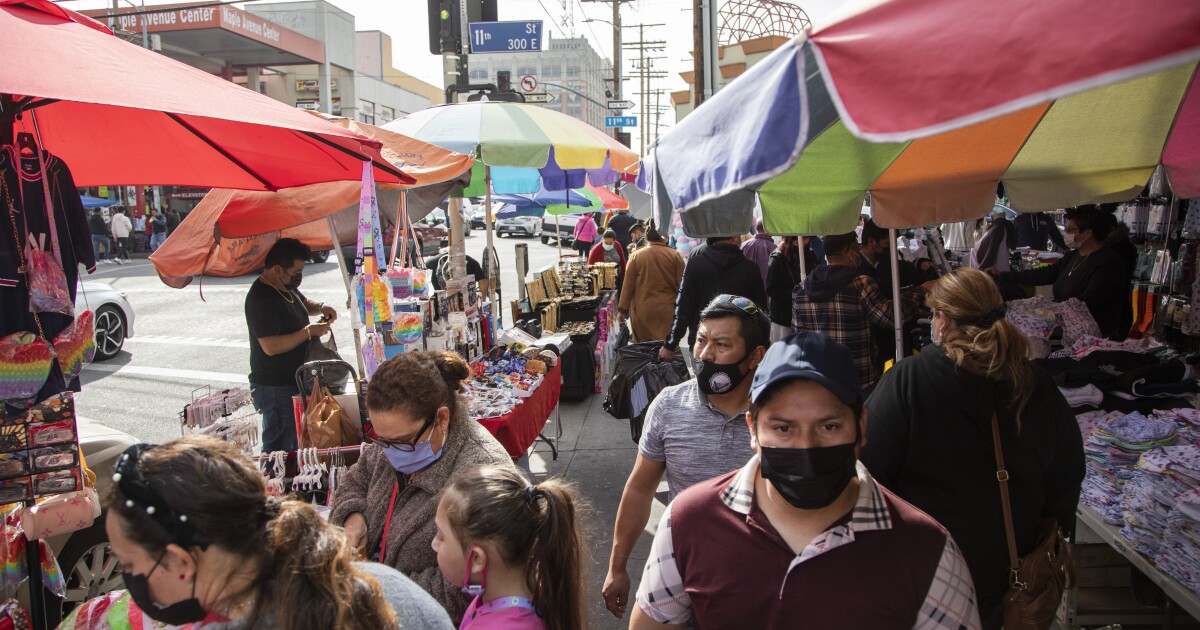 Despite the rapid spread of the Omicron coronavirus variant, Los Angeles County’s top health official said Tuesday that no lockdowns are planned at this time, as vaccines and other safety measures remain strong tools to combat the new threat.

Meanwhile, Gov. Gavin Newsom on Tuesday announced that California will mandate boosters for all healthcare workers in hopes of improving immunity and protecting hospitals from an expected surge of patients.

While L.A. Public Health Director Barbara Ferrer acknowledged the growing anxiety over Omicron, she emphasized that the rollout of vaccines puts the region in a better position than it was in during last winter’s COVID-19 surge.

“I know that the thing that’s top of mind is, do we see in this near future closing back down our stores, telling people they have to stay home? And my hope is no,” Ferrer told the county Board of Supervisors Tuesday. “But that’s a hope. And it really depends on us being able to use these new tools we have to the best of our ability to actually be able to mitigate against this pretty big threat that we all face with Omicron.

“We’re obviously going to look very carefully at what are the strategies that are appropriate as we see more and more cases,” she said. “But what I do want to note is we’re not where we were last year; we have new tools, so we don’t need to do what we did last year.”

“I don’t see a lockdown. I think we’re so much better protected than we were,” he said. “I do think that restrictions such as masking indoors will continue, especially as these cases go up. We’ll have to follow our hospitalizations very carefully.”

Some countries have instituted strict new measures aimed at checking Omicron’s spread, including a nationwide lockdown in the Netherlands and a curfew for pubs and restaurants in Ireland.

California last week instituted a statewide mask mandate for indoor public spaces. However, that order didn’t materially affect L.A. County, which has had similar rules in place since the summer.

L.A. County also mandates that patrons and employees of indoor bars, wineries, breweries, distilleries, nightclubs and lounges show proof that they’ve been fully vaccinated against COVID-19. In the city of Los Angeles, such verification is required at a slew of additional businesses, including indoor restaurants, gyms and movie theaters.

During an address Tuesday, President Biden also emphasized that conditions are much different than they were in March 2020, when California became the first state to issue an expansive stay-at-home order.

To those who ask whether the nation might be heading back to such restrictions, Biden said, “The answer is absolutely no.”

He cited three major reasons: more than 200 million Americans are fully vaccinated, the nation is well-stocked with vital supplies like ventilators and personal protective equipment, and officials and health experts know far more about how to tackle the coronavirus than they did 21 months ago.

“We should all be concerned about Omicron but not panicked,” Biden said. “If you’re fully vaccinated, and especially if you got your booster shot, you are highly protected.”

But, he added, “Omicron is serious, potentially deadly, business for unvaccinated people.

“I know you’re tired, I really mean this, and I know you’re frustrated,” he said. “We all want this to be over. But we’re still in it. And this is a critical moment. We also have more tools than we ever had before. We’re ready. We’ll get through this.”

One matter that’s being closely watched by scientists is whether Omicron produces less severe disease than other variants of the coronavirus.

Of the 99 cases associated with Omicron that had been confirmed in L.A. County as of Monday, none resulted in hospitalization with COVID-19 or death, according to Ferrer.

Even so, the fact that Omicron spreads so rapidly means that many more people may end up exposed to infection — and not all will be able to ward off the viral assault.

“The question that remains to be definitively answered is how much severe illness is caused by Omicron,” Ferrer said, noting that if it “causes even the same amount of illness that Delta did, but it infects two or three times as many people … it can easily overwhelm the healthcare system.”

L.A. County’s daily census of coronavirus-positive patients has swelled by about 31% since the start of the month, state data show.

However, Monday’s total of 748 remains well short of the peak seen during the Delta wave that struck over the summer — to say nothing of the sky-high patient counts recorded at this time last year.

But officials have noted that hospitalizations are a lagging indicator of coronavirus transmission, usually rising about two weeks after the number of confirmed cases starts to climb. On Tuesday, the county reported 3,052 new cases, the fifth straight day with at least 3,000 additional confirmed infections.

So far, California has not seen the sort of sharp, sustained growth in coronavirus cases that marked earlier surges. But steep increases have struck elsewhere in the U.S. — including New York City and Rhode Island.

“While we’re better protected now, I have no doubt that what happens in other places like New York and the Northeast comes to L.A. eventually,” Garcetti said.

Officials continue to stress that those who are vaccinated — and especially those who have gotten a booster shot — remain far better protected than those who have yet to roll up their sleeves.

California, on the whole, has a relatively robust level of vaccination coverage. About 74% of Californians have received at least one dose, and two-thirds of the state population is fully vaccinated. In L.A. County, those numbers are 75.4% and 67.7%, respectively.

But officials have expressed concern that Omicron could still spread rapidly and overwhelm hospitals, particularly in areas with lower vaccination rates.

Fourteen of California’s 58 counties have yet to fully vaccinate even half their residents, according to data compiled by The Times.

And even relatively well-covered areas like L.A. County still have plenty of unvaccinated residents. Ferrer said about 2.2 million eligible Angelenos have yet to receive their first dose.

“The evidence is just overwhelming around the safety and the effectiveness of the vaccines,” she said. “And we really need the unvaccinated people to understand that they’re the fuel for this virus spreading and the fuel, unfortunately, for us continuing to deal with lots of potentially more dangerous variations of the virus.”

Newsom’s order for health workers to get boosted is aimed at offering California more protection.

“With Omicron on the rise, we’re taking immediate actions to protect Californians and ensure our hospitals are prepared,” Newsom said in a statement on Twitter.

Newsom’s office said that California is the second state, after New Mexico, to require health care workers to get boosted.