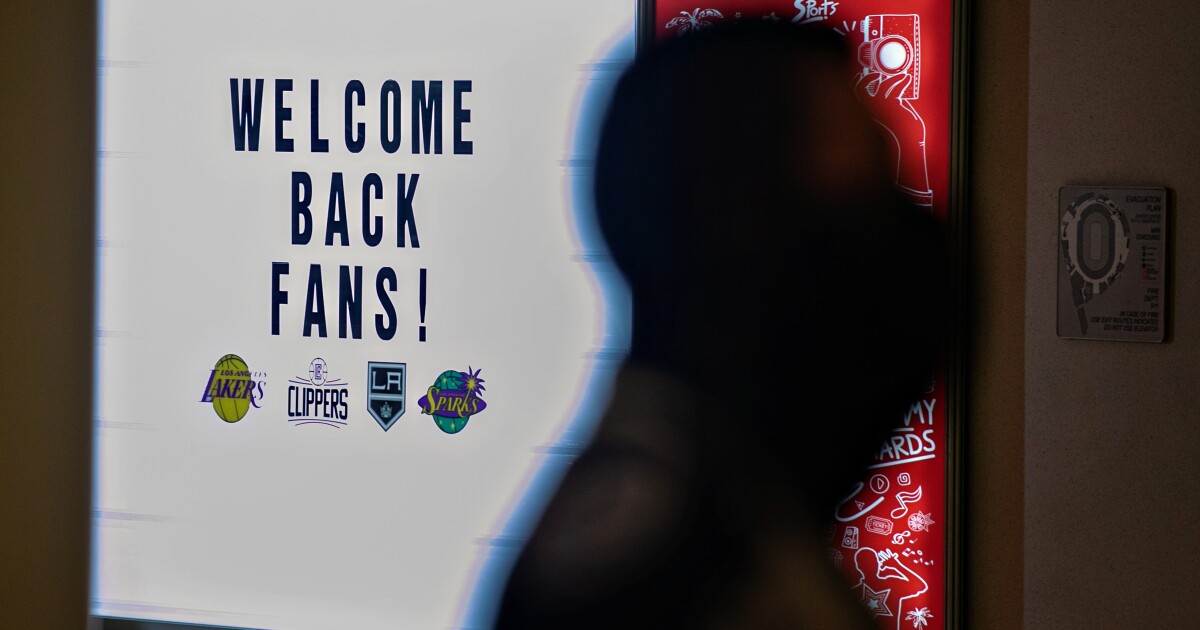 Los Angeles County is poised to potentially reopen its economy to an extent that would have been unthinkable in the not-too-distant past.

The possible move to the yellow tier — the most lenient of California’s four-category color-coded reopening system — could happen next week as the coronavirus continues to recede throughout the region.

It’s a remarkable achievement for a county that just three months ago was considered in some corners to be the national epicenter of COVID-19, with hundreds dying each week and hospitals pushed to the brink. It was only about six weeks ago that the county moved out of the state’s most restrictive purple tier, in which indoor operations are suspended or severely limited across a host of business sectors.

According to state data released Tuesday, the county’s rate of new coronavirus cases, adjusted based on the number of tests performed, had dropped to 1.9 per day per 100,000 people.

That’s down from the rate of 7.2 recorded at the beginning of March. In late January, the county’s adjusted case rate was 48.2.

What does the yellow tier mean?

L.A. County would have to maintain its current low case rate next week to advance to the yellow tier, in which most businesses can operate indoors, with modifications.

Bars that don’t serve meals would be allowed to reopen indoors, as can saunas and steam rooms.

Here are some specifics:

Amusement parks and fairs can expand attendance to up to 35% of capacity, up from 25% in the next-lowest orange tier. The indoor space limit remains at 25%. Visitors must either be a resident of California or be fully vaccinated.

Restaurants are no longer capped at 200 people, as is required in the orange tier, but are still limited to 50% capacity. As in the orange tier, the limit can increase to 75% if all guests show proof of full vaccination or of a negative coronavirus test.

Movie theaters can open with up to 50% of capacity. If all guests show proof of full vaccination or that they’ve recently tested negative for the coronavirus, the limit can increase to 75%, up from 37.5% from the orange tier.

Gyms and card rooms can expand indoor attendance to 50% of capacity, up from 25%. If all guests show proof of full vaccination or a negative test, the limit can increase to 75%, up from 37.5%.

It’s not a given that L.A. County would reopen as widely as the state permits, however. Counties can opt to keep stricter rules in place, if they feel doing so is warranted.

What are the larger trends?

L.A. County both reflects and helps shape the progress seen statewide as California has emerged from the dark days of its fall-and-winter COVID-19 wave.

Over the last week, the state has reported an average of 1,853 new cases per day, a 39% decrease from two weeks ago, according to data compiled by The Times.

Case counts haven’t been this consistently low since last spring.

California’s latest seven-day rate of new coronavirus cases, 32.6 per 100,000 people, remains well below the nationwide rate of 113.7, figures from the from the Centers for Disease Control and Prevention show.

The steep drop in newly confirmed infections doesn’t appear to be a byproduct of decreased testing either, as the seven-day average of daily tests conducted has hovered around 200,000 since March.

Meanwhile, the proportion of those tests coming back positive has plummeted, falling to a seven-day average of 1.2% as of Tuesday. During the height of the surge, the weekly statewide positivity rate approached 15%.

The number of coronavirus-positive patients in California’s hospitals has also continued to tumble. On Monday, there were 1,776, including 431 in intensive care. Both figures are among the lowest recorded during the pandemic.

The number of Californians dying from COVID-19 has also fallen steadily as of late. Over the last week, the state has reported about 60 deaths per day; during the height of the surge, the daily toll was in the hundreds.

Will the progress continue?

To keep the progress going, officials and experts say providers will need to vaccinate as many people as possible as quickly as possible. Until there’s wide vaccine coverage, continued adherence to public health protocols will be vital to thwart any potential rebound in coronavirus transmission.

California’s COVID-19 vaccine rollout quickened significantly from January until the early part of April, but that inoculation pace tailed off after officials paused use of the Johnson & Johnson vaccine as a precaution earlier this month, according to data compiled by The Times.

Though that stoppage has now been lifted, it remains to be seen whether the state can match or exceed its previous tempo. Some officials have also expressed concern that the number of Californians who are ready and eager to roll up their sleeves may be dwindling, meaning providers would have to focus on persuading those who are on the fence to get vaccinated.

Los Angeles County and many other counties are now offering vaccines at some sites without requiring an appointment.

“This will be our first full week where everybody can just walk in, and you don’t need to make an appointment,” L.A. County Public Health Director Barbara Ferrer said Monday. “It is really easy to get vaccinations now.”

With vaccine supplies now ample, there also appears to be a wide availability of vaccination appointments in San Diego, Orange, Riverside, San Bernardino and Ventura counties. Some counties in Northern California are also reporting a healthy supply, including Santa Clara, the region’s most populous.