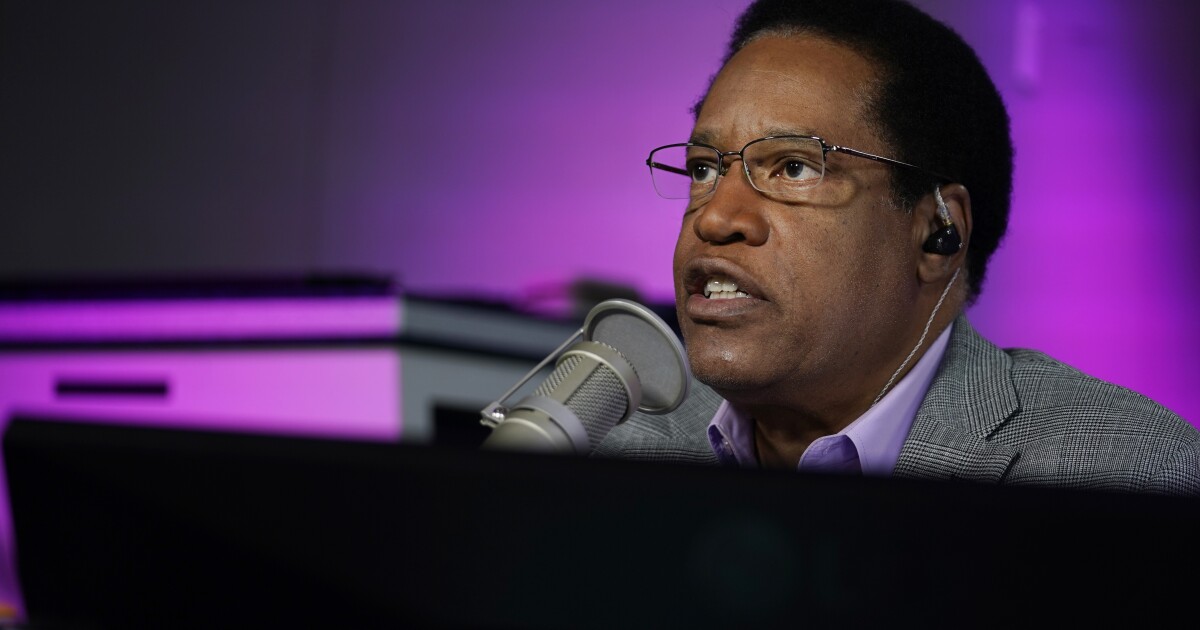 Talk radio host and gubernatorial candidate Larry Elder is drawing fire for a decades-old clip, recorded at a comedy club, in which he repeatedly uses the N-word, in an apparent impression of O.J. Simpson defense attorney F. Lee Bailey. Elder is the front-runner for governor in the event that Gov. Gavin Newsom is recalled.

The clip, recorded in the mid-1990s at Igby’s comedy club in Los Angeles, was aired by Elder on his KABC show shortly thereafter. The recording now in circulation appears to be from Elder’s KABC show, during which he played the original comedy-club recording.

It was uncovered by KBLA morning host Dominique DiPrima, who first re-aired the KABC clip during her show July 29. It was re-aired last week by KBLA host Tavis Smiley, who said that “many of our listeners found the Elder comedy skit to be shameful and disgraceful” after it aired on DiPrima’s show.

One issue was Elder’s pronunciation of the N-word. He used an exaggerated tone, enunciating the “er” at the end of the word rather than using the “a” pronunciation, which is more commonly accepted among and used by Black people, studies have shown.

“He is using other racial slurs and stereotypes in a very performative, minstrel-y way. It’s like a Black man doing blackface. It is highly offensive to me, and it speaks to a consciousness — a willingness to throw us under the bus,” DiPrima said.

The controversy comes as Elder faces increasing heat from his fellow Republican candidates.

On Thursday, both Caitlyn Jenner and Kevin Faulconer called on Elder to drop out of the race. Jenner called out Elder’s past comments about women, while Faulconer said, “Elder’s lack of judgment and character flaws threaten the success and credibility of this historic recall movement.”

The calls from fellow candidates come after Elder’s ex-fiancee made a number of allegations, including that he brandished a gun during a heated argument, which Elder has denied. The Sacramento Bee editorial board has also called on Elder to withdraw from the recall election.

The recently unearthed audio clip begins with Elder on his KABC radio show, making an apparent reference to Bailey’s 1996 surrender to federal authorities on charges of contempt of court. During the Simpson trial in 1995, Bailey had grilled LAPD Detective Mark Fuhrman about whether he had used the N-word.

“I hope they don’t put F. Lee Bailey in the cell with a Black guy,” Elder says in the clip. “Remember when he was cross-examining Mark Fuhrman?”

Elder, who is Black, continues in an exaggerated impression of Bailey’s voice, saying, “Mr. Fuhrman, have you ever used the word n—?” He then says, “Remember that? It looks to me like he was just having too good a time saying the word n—. You know what I’m saying? And I was at a club not long ago, and I made the same argument.”

The audio then cuts to the recording from the comedy club. The sound quality is poor, and parts of Elder’s speech are difficult to hear.

“Think about it, how often can a white guy use the word n— in front of a bunch of Blacks? I mean, he was into it,” Elder says in the clip, before saying the N-word over and over again in various dramatic tones, to the sounds of raucous laughter.

Both DiPrima and Smiley castigated Elder for the clip.

“It is presumably a predominantly white audience, and they just are lapping it up,” DiPrima, who is Black, said on her show.

Elder defended the clip on Smiley’s show, saying the piece was a criticism of Bailey and comparing his performance to comedian Dave Chappelle’s use of the N-word.

“Dave Chappelle doesn’t spew out anti-Black rhetoric all the time,” Smiley, who is also Black, told Elder on the show. “And if you weren’t doing that all the time, people might have given you the benefit of the doubt on the joke. But when you put that out there — and combine that with your rhetoric for years and years and years — it ain’t funny.”

In a statement emailed to The Times, Elder’s campaign said, “DiPrima clearly failed to grasp that Elder’s skit was making fun of the covert racism of the pompous F. Lee Bailey. In knee-jerk rhetoric that is far too common today, she resorts to accusing Elder of promoting hate simply because his views have long been contrary to her own. Unlike DiPrima, Elder does not believe institutional racism is the problem in America, or that critical race theory and reparations are the solutions.”

France, still mad about that submarine deal, just recalled its ambassadors to the United States and Australia – CNBC