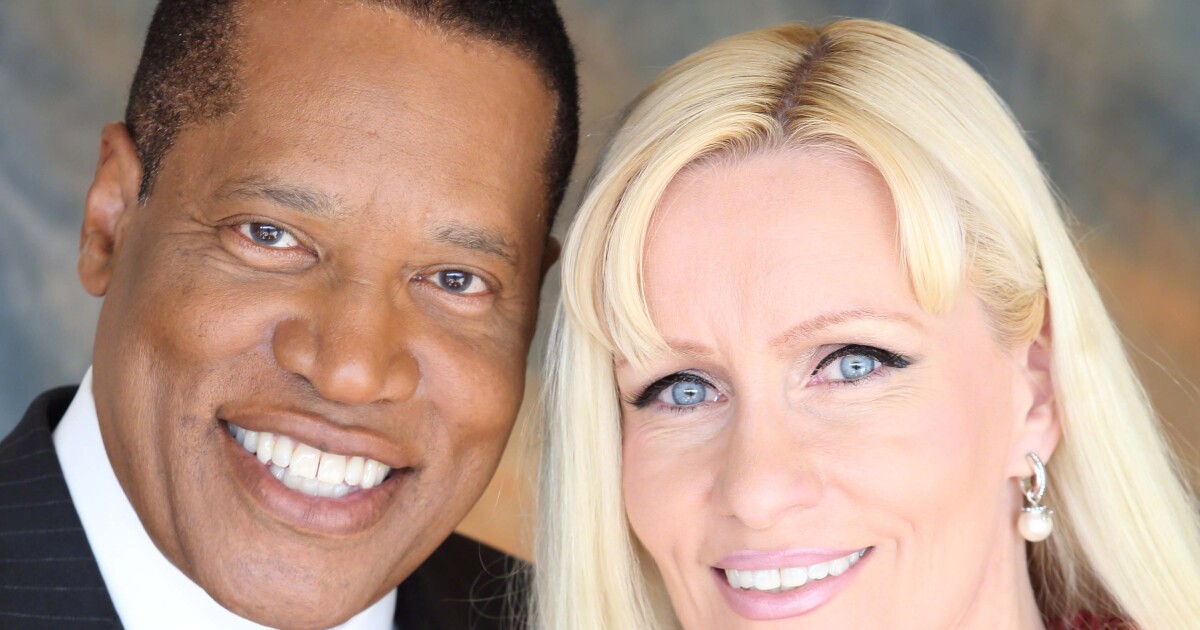 The day in late April 2015 was to be a double celebration: Larry Elder would get his star on the Hollywood Walk of Fame, then be married, on the spot, to his radio producer and love, Alexandra Datig.

But Datig today recalls that plan as a fleeting high point in an 18-month relationship that she said turned stormy. Datig alleges Elder controlled her finances and subjected her to verbal and emotional abuse.

The troubled partnership between the radio talk show host and his one-time girlfriend exploded into public view Thursday.

As Elder continued to lead a pack of contenders who hope to replace Gov. Gavin Newsom in the California recall election, Politico reported that the relationship devolved to the point that Elder allegedly checked to see whether his .45 revolver was loaded, during a heated argument with Datig.

Datig relayed a similar story, as well as other allegations against Elder, in an interview with The Times last week.

“I, for one brief moment, believed that he intended to shoot me. I was in fear for my life,” Datig said, calling it “my Phil Spector, Lana Clarkson moment,” referring to the Hollywood music producer who shot his companion to death. She added: “At the same time, I’m also very fearless and, having grown up around guns, I didn’t take it seriously.”

“I have never brandished a gun at anyone,” Elder said. “I grew up in South Central; I know exactly how destructive this type of behavior is. It’s not me, and everyone who knows me knows it’s not me. These are salacious allegations.”

Elder signaled that he would try to move past the issue quickly, saying it was “beneath” him and that he would stay focused on issues. The alleged incident did not come up in Thursday night’s debate, which featured other recall challengers but not Elder.

But Assemblyman Kevin Kiley (R-Rocklin) issued a statement saying: “Ms. Datig’s deeply troubling account should be treated with the utmost seriousness,” adding, “Mr. Elder should be given every opportunity to respond.”

Datig, who is supporting former San Diego Mayor Kevin Faulconer for governor, appeared determined to put the episode and Elder’s private behavior before the public.

“There is Larry Elder the brand, the one on the radio, that everyone sees,” Datig said. “Then there is the Larry Elder after the show. The one with the insults, the Tasmanian devil rhetoric, the hoodwinking.”

Datig previously gained some measure of attention because she worked for Hollywood madam Heidi Fleiss. She described approaching police and becoming an informant, helping send Fleiss to prison for a business that provided high-priced prostitutes to rich and powerful men.

She subsequently spoke in public out about surviving sex trafficking and drug abuse. She became an assistant to Los Angeles City Councilman Nate Holden, giving her entree to L.A.’s political elite.

Datig, 51, said she met Elder, 69, at political events and that he had asked her out several times over the course of about a decade before she agreed. She moved into his Hollywood Hills home and said she worked for him — helping him prepare for his shows and set up a website — after he was fired from KABC AM 790 in late 2014. (Elder briefly streamed his show after he left the station and before taking his current post at AM 870.)

Datig estimated that she devoted 3,000 hours to her work, helping with things like publicity and helping Elder transition to an online platform. She said she was not paid a salary, and was compensated instead with the use of credit cards and a Cadillac.

Prominent among her complaints was what she said was Elder’s “constant” smoking of marijuana. She said she asked him to stop, because she worried it would make it harder for her to maintain her sobriety. Elder kept on smoking, she said.

She provided a mobile phone video in which she asks Elder about his relationship with the rapper Snoop Dogg. “I introduced him to the evil weed,” Elder responds. “I taught him everything he knows … I’m the one who made him what he is.”

She said it was on the day after Valentine’s Day in 2015 that she told Elder she would not marry him. Without any of her own money, she continued to live in his house. The two argued about the terms of their breakup, with Datig insisting she be paid for her past work and to remove a tattoo, “Larry’s Girl,” that she said he demanded she get.

On the night of the alleged gun incident, Datig said something that sent Elder “fuming … full of anger and silent scorn,” she recalled. Elder walked to a nightstand and pulled out his .45-caliber revolver, opened the cylinder to see if it was loaded, and put the gun back into the drawer, Datig said. She said that Elder did not point the gun at her or make a verbal threat.

In her interview with The Times last week, Datig also said that Elder did not “wave” the gun, as later reported by Politico. After that account went online Thursday, Datig reiterated that point.

But she recalled feeling uneasy enough that tried to “defuse” the situation and then locked herself in a downstairs bedroom.

Datig did not file a police report or seek a restraining order. She said she did not want to draw attention to herself or cause a sensation that might distract from her budding work as a political commentator and, later, her pursuit of a career in law enforcement

About a month after the alleged 2015 incident, Datig sent an email to her attorney, to Los Angeles City Councilman Bernard C. Parks and to 11 other people, asking for “help and advice” on how to resolve her differences with Elder.

“During an argument about a month ago, he felt it necessary to go to his cabinet where he kept his gun and check if it was loaded and made sure it was in my view,” Datig wrote in the email. The email produced a referral to a shelter for abused women, but no other official action, Datig said.

Elder’s denial did not address the rest of the specifics of Datig’s complaint, or whether he had ever examined his gun during an argument with her. The Times asked for clarification, but received none from the candidate’s campaign.

After her story went public, Datig said her day turned “crazy,” her phone filling with calls and texts from the media. And Elder insisted he would not engage.

“While my opponents and the Newsom campaign would love to keep voters distracted,” he said in his statement, “I am going to stay focused on the issues that inspired 1.7 million Californians to petition for this recall.”

Body found in Wyoming believed to be Gabby Petito – WJTV