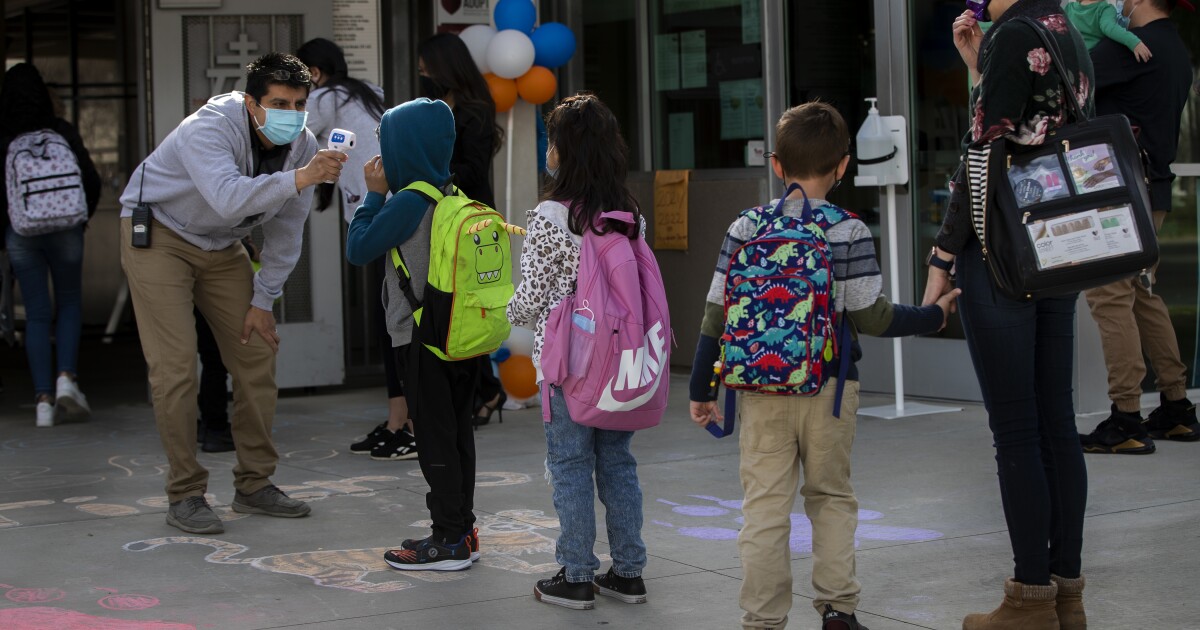 Los Angeles students are a critical step closer to a return to campus beginning in mid-April under a tentative agreement reached Tuesday between the teachers union and the L.A. Unified School District, signaling a new chapter in an unprecedented year of coronavirus-forced school closures.

The agreement, which must be ratified by members, establishes safety parameters for a return to campus and lays out a markedly different schedule that still relies heavily on online learning. The school day would unfold under a so-called hybrid format — meaning that students would conduct their studies on campus during part of the week and continue with their schooling online at other times.

Families would retain the option of keeping students in distance learning full time.

“With all of our key safety protocols met, this agreement reflects a uniform health and safety plan that we can be proud of as educators and that puts us on the path for a safe return, across LAUSD and in all of our schools,” Myart-Cruz said.

“As we have both stated for some time, the right way to reopen schools must include the highest standard of COVID safety in schools, continued reduction of the virus in the communities we serve and access to vaccinations for school staff,” they said in the statement. “This agreement achieves that shared set of goals. It’s our shared commitment to the highest safety standards and spirit of trust and collaboration we will take with us back to schools.”

Under the agreement, members of United Teachers Los Angeles, which represents teachers, nurses, counselors and librarians, would not have to return to work until they have had access to COVID-19 vaccinations and have achieved maximum immunity — a period of up to six weeks. That duration period — plus the amount of time needed to get vaccination appointments — is the main driver of a district timetable aiming to restart elementary schools on April 19.

The union has not signed off on a specific return date.

Middle and high schools would open later in April or early in May, according to a district source who was not authorized to speak on the record.

Another condition for a return is that Los Angeles County enter the state’s “red tier,” which would mean that the county is one step improved from the “purple tier,” the worst level of widespread coronavirus infection in the community. That parameter appears to be within reach, as the county is expected to leave the purple tier and enter the red tier within days.

If approved, the agreement would bring a measure of certainty to the remainder of the academic year for the families of 465,000 in kindergarten through 12th grade in the nation’s second-largest school system.

But it won’t restart on-campus instruction as soon as many families would like, and the school day will look markedly different. Campuses have been shut down in Los Angeles since March 13, 2020.

The Times learned details of the deal based on conversations with sources on both sides of the negotiations. Here is what appears to be in the agreement:

At the elementary level, students would attend five days a week in either a morning or early-afternoon session. The staggered schedule would allow for smaller classes, in keeping with state recommendations to keep students at least six feet apart.

Middle and high schools would resume with even starker changes. Students would attend two days a week on a staggered schedule. But instead of moving from class to class, students would remain in their advisory classroom — similar to a homeroom base — for the full day.

Advisory teachers would have their own schedule of classes — which they would conduct from school, but not necessarily to the students in front of them. To avoid mutual distraction, students would be provided with noise-cancelling headsets.

During one period a day the headsets would come off, and the teacher and students would work together on assignments and activities that are not part of the core academic work. These activities would include a focus on students’ social and emotional well-being.

For the most part, however, secondary students will not have in-person instruction even when they are on campus.

The approach to the secondary school day evolved from trying to combine strong safety protocols with the more complex scheduling of middle and high schools. Keeping students in their advisory class divides the school into small, stable groups. If a student becomes infected in one group, only that group would have to quarantine at home.

It also would have been challenging to reconfigure the master schedule of a secondary campus — and have students adjust to new teachers — so close to the end of the school year.

Educators will not be required to teach students in the classroom and on Zoom at the same time.

Under the deal, the district will commit to making “reasonable accommodations” for teachers when a doctor verifies that they are in a high-risk category related to COVID-19. Teachers who continue to work remotely for health reasons will be supported with an in-person substitute.

Other safety protocols also would be followed, including the mandatory wearing of masks.

A COVID-19 Compliance Task Force will be formed at every school. It would address health and safety compliance issues as they arise.

A return in late April would result in L.A. Unified forfeiting a substantial portion of state funding available to districts that reopen for kindergarten through second grade by April 1. But the district has qualified for other funding, providing a multibillion-dollar boost for efforts to address learning loss caused by the pandemic.