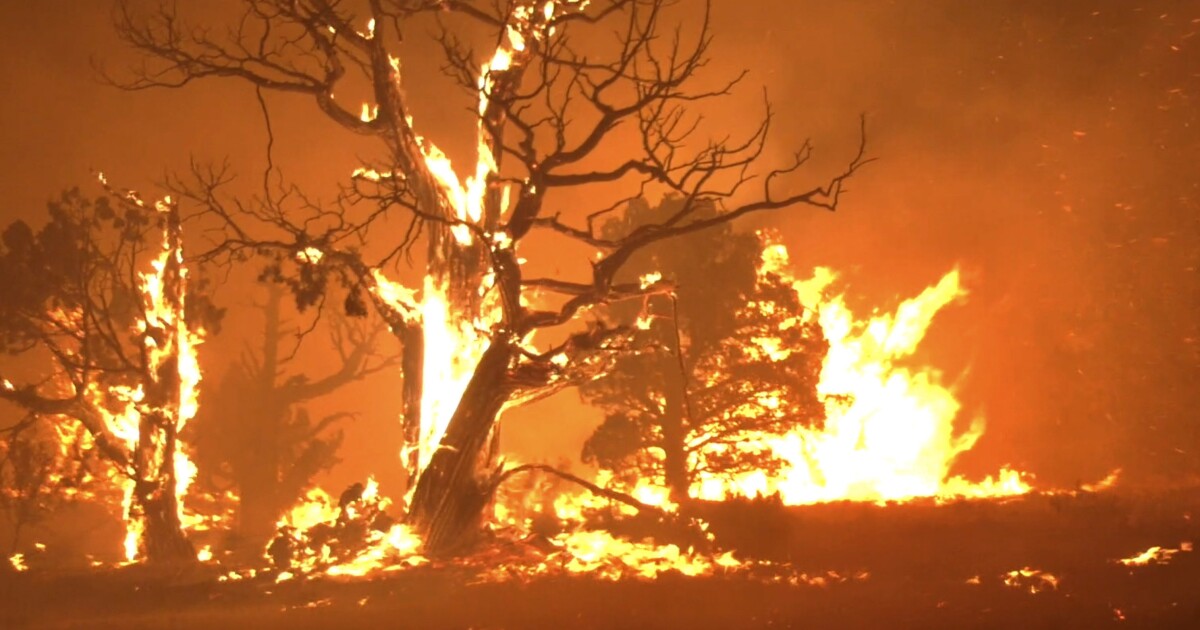 In what is perhaps an ominous harbinger of the coming fire season, crews are battling multiple wildfires across California while much of the region remains mired in treacherous heat and bone-dry conditions.

The largest of the fires, the lightning-sparked Lava fire in Siskiyou County, forced the evacuation of at least 8,000 residents Monday afternoon as gusty red flag conditions fueled the searing flames.

By Tuesday morning, the fire had expanded nearly tenfold, to 13,300 acres, and was 20% contained, Shasta-Trinity National Forest officials said.

“The fire made significant runs yesterday,” said Michelle Carbonaro, a spokeswoman for the fire’s unified command team, noting that the northern border saw the most growth Monday.

More than 470 personnel are now battling the blaze from the air and the ground, she said, with crews working in 24-hour shifts.

Footage captured by OnScene.TV near Highway 97 in Weed showed firefighters working deep into the night while nearby brush and trees cracked and sizzled in the flames.

Evacuation orders for the Lake Shastina and Juniper Valley areas issued by the Siskiyou County Sheriff’s Office remained in effect Tuesday morning. Carbonaro said crews were prioritizing the southern and western edges of the fire, which are closest to the communities.

Officials have also closed Highway 97 between Weed and the Juniper Lodge, about a 30-mile stretch.

Dangerously hot, dry weather is expected to improve as the week goes on, Carbonaro said, but crews on Tuesday will have to contend with another day of difficult conditions.

“There will be more high heat today,” she said. “The area is under that extreme heat wave of the whole Pacific Northwest.”

Many parts of the Pacific Northwest remain under excessive heat warnings Tuesday, according to the National Weather Service.

Meanwhile, crews have gained some control over fires in Kern, San Bernardino and Monterey counties, as well as a brush fire that ignited in Hemet on Monday afternoon.

Two of the fires — the Shell fire in Kern County and the Peak fire in San Bernardino — have been linked to vehicle fires.

The Shell fire began Sunday after a car caught fire on the shoulder of a road, Kern County Fire Department spokesman Andrew Freeborn said. The cause of the vehicle fire remains under investigation.

By Tuesday morning, the Shell fire had neared 2,000 acres but was 65% contained, according to the California Department of Forestry and Fire Protection.

The Peak fire was also caused by a “single vehicle accident,” San Bernardino National Forest officials announced on Twitter. In that instance, the car fire quickly spread to nearby vegetation.

The fire reached about 35 acres Monday before its progress was stopped around 2 p.m., forest officials said.

About an hour later, a vegetation fire ignited in Hemet.

Dubbed the Stowe fire, it grew to 122 acres by 5 p.m. before the spread was stopped, the Riverside County Fire Department said.

The fire damaged several power lines, spurring an outage for as many as 3,000 residents in east Hemet. Southern California Edison restored power to most residents by 5:30 p.m., officials said.

The Stowe fire was 100% contained by 8 a.m. Tuesday, Cal Fire announced on Twitter.

The cause of that fire has not yet been determined.

Olson said the fire outbreaks will likely be repeated in the months to come.

“We’re anticipating a very busy season, unfortunately,” she said, pleading with the state’s residents to “recreate carefully” and avoid starting campfires or using fireworks where they’re not appropriate.

“Extreme caution is encouraged,” she added.