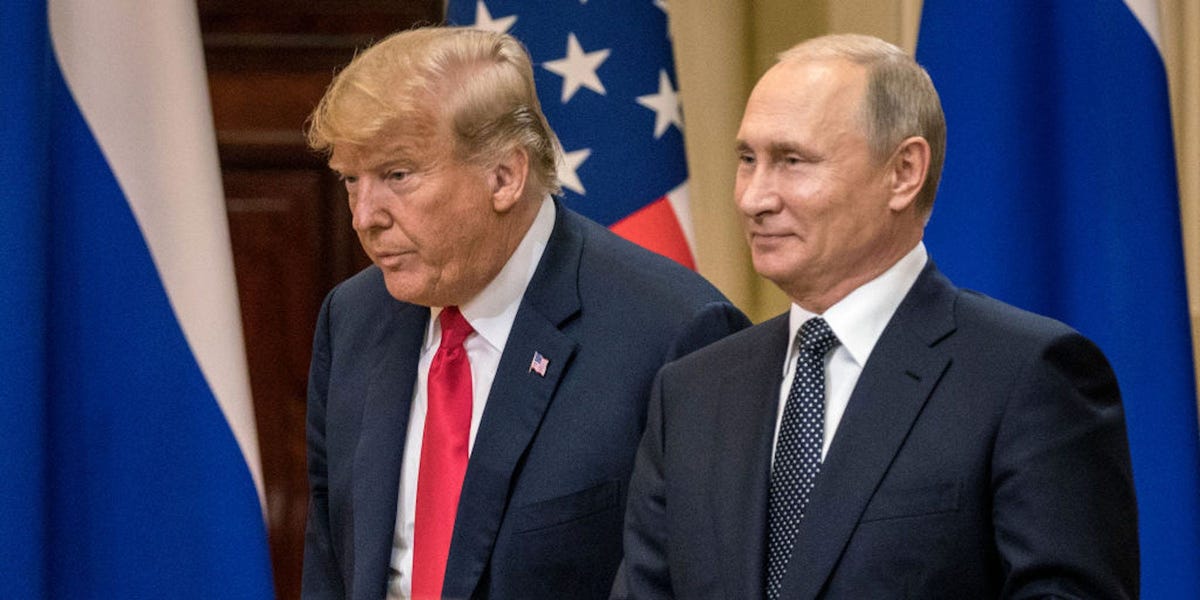 Former President Donald Trump was characterized as an “impulsive, mentally unstable and unbalanced individual who suffers from an inferiority complex,” said documents The Guardian and experts consulted by the publication assessed to be leaked from the Kremlin.

The documents appear to show that Russian President Vladimir Putin personally supported Moscow’s interference in the 2016 presidential election to support Trump’s campaign, bolstering the US intelligence community’s findings on the matter. Independent experts reviewed the documents and said they appeared to be authentic, The Guardian reported.

The papers suggested that Putin, his spy chiefs, and senior ministers in January 2016 met and concluded that Trump was the best option to promote the Kremlin’s strategic objectives because he would induce “social turmoil” and undermine the American presidency. Trump’s victory “will definitely lead to the destabilization of the US’s sociopolitical system,” the report said. An official photo taken in January 2016 shows Putin meeting with his spy chiefs and top ministers.

One report prepared by Putin’s expert department called for “all possible force” to be used to ensure Trump’s victory, and that the Kremlin viewed him as the “most promising candidate.”

The US intelligence community determined in early 2017 that the Russian government waged an elaborate and multifaceted campaign to meddle in the 2016 election. It did so by working to recruit unwitting assets for its cause; hacking into the Democratic National Committee and leaking emails that damaged Hillary Clinton’s campaign; carrying out a social-media disinformation operation to boost Trump; and targeting election infrastructure in as many as 39 states.

The special counsel Robert Mueller also concluded in his final report that “the Russian government perceived it would benefit from a Trump presidency and worked to secure that outcome, and that the Campaign expected it would benefit electorally from information stolen and released through Russian efforts.”

The Kremlin, which has repeatedly denied that Russia interfered in US elections, scoffed at The Guardian’s report and told the outlet that the notion that Putin and other top officials agreed to support Trump’s candidacy in a secret meeting was “a great pulp fiction.”

Thomas Rid, a professor of strategic studies at Johns Hopkins University and an expert on disinformation, urged caution toward The Guardian’s report. He tweeted, “For a ‘leak’ of this magnitude, we need at least some details on the chain of custody.” He also said that the fact that the papers leaked from within the Kremlin — according to The Guardian — means there could be a risk of forgery.

Chris Krebs, the former top cybersecurity official in the US who was fired by Trump after speaking out against his election lies, agreed with Rid, saying the leak was “far too convenient” and looked like a disinformation operation.

“It could all be individually or collectively true and at the same time planted & fake,” he added.

The documents seen by The Guardian also confirmed that the Kremlin had potentially compromising material on Trump — kompromat — pertaining to his visits to Russia before running for president, the report said. But The Guardian report didn’t elaborate on the nature of the compromising material. Russian spies are known to leverage things such as evidence of debt and extramarital affairs to compel people to cooperate with them.

Trump repeatedly downplayed Russian election interference, even as his administration issued sanctions over it, and at one point he appeared to side with Putin over the US intelligence community on the matter. President Joe Biden has taken a far more aggressive tone toward Putin, and in April his administration slapped sanctions on over 30 Russian entities over the Kremlin’s interference in US elections and the SolarWinds hack.