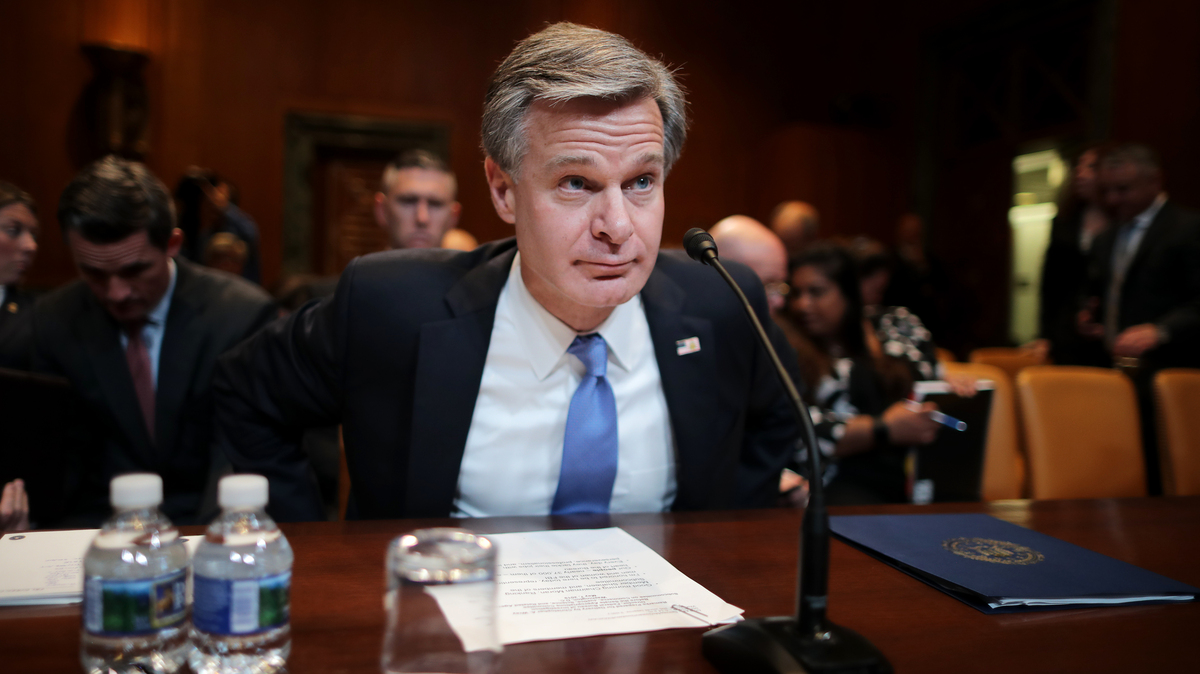 FBI Director Christopher Wray, pictured in May 2019, is testifying before the Senate Judiciary Committee on Tuesday.

FBI Director Christopher Wray is expected to face a grilling from lawmakers Tuesday about the bureau’s response to the Jan. 6 attack on the Capitol and the rising threat from white supremacists and other domestic violent extremists.

Wray is set to appear before the Senate Judiciary Committee for what will be his first public testimony before Congress since a pro-Trump mob ransacked the Capitol almost two months ago.

The January assault left at least five people dead, caused millions of dollars in damages to the historic building and led to then-President Donald Trump’s second impeachment. Federal prosecutors have opened a massive nationwide investigation to find those who took part in the violence and hold them responsible.

So far, authorities have arrested some 280 people and charged more than 300 in connection with the attack.

On a parallel track, members of Congress are looking for answers about the security failures that allowed the Capitol to be breached by the mob. They also want to know what the FBI is doing to counter the danger posed by far-right violent extremists.

“I think domestic terrorism, religious and racial-based hate groups have become a major threat in America,” the committee’s Democratic chairman, Dick Durbin, told reporters Monday. “I want to know if our intelligence operations have taken this into consideration in establishing their priorities.”

Durbin and the panel’s other Democrats sent Wray a letter last week expressing concerns about the FBI’s approach to white supremacists and other homegrown far-right extremists.

“Unfortunately, the FBI appears to have taken steps in recent years that minimize the threat of white supremacist and far-right violence, a grave concern that some of us have raised with you on numerous occasions in recent years,” the letter says.

The Democrats say public reporting suggest the FBI, at the direction of Trump administration appointees, shifted resources from investigating right-wing extremists to instead focus on left-wing movements.

“These reports raise serious concerns about whether the FBI is allocating law enforcement and intelligence resources in a manner that reflects the scale of the threat posed by violent white supremacists, whom DHS has called ‘the most persistent and lethal threat in the Homeland,’ ” the lawmakers write.

Wray has only spoken publicly once since the riot. In those remarks, eight days after the attack, he said the FBI was aggressively tracking down suspects and monitoring potential threats.

In previous testimony, he has defended the FBI’s approach to domestic terrorism threats of all stripes, and stressed that the bureau investigates violence, not ideology.

Speaking to reporters Monday, Durbin said he has questions for Wray about Jan. 6.

“What did he know? When did he know it? And who did he tell?” Durbin said. “Those are questions which have been raised in other hearings, but he is the man of the hour.”

Wray is testifying a week after three former top congressional security officials — the ex-sergeants at arms of the House and Senate plus the ex-U.S. Capitol Police chief — blamed what they called a lack of actionable intelligence for the security failure on Jan. 6.

They pointed the figure at intelligence despite the fact that the Capitol Police had produced its own assessment on Jan. 3 that Congress would be a likely target for the crowd on Jan. 6. Former Capitol Police Chief Steven Sund testified last week, “None of the intelligence we received predicted what actually occurred.”

All three officials resigned after the Capitol attack.