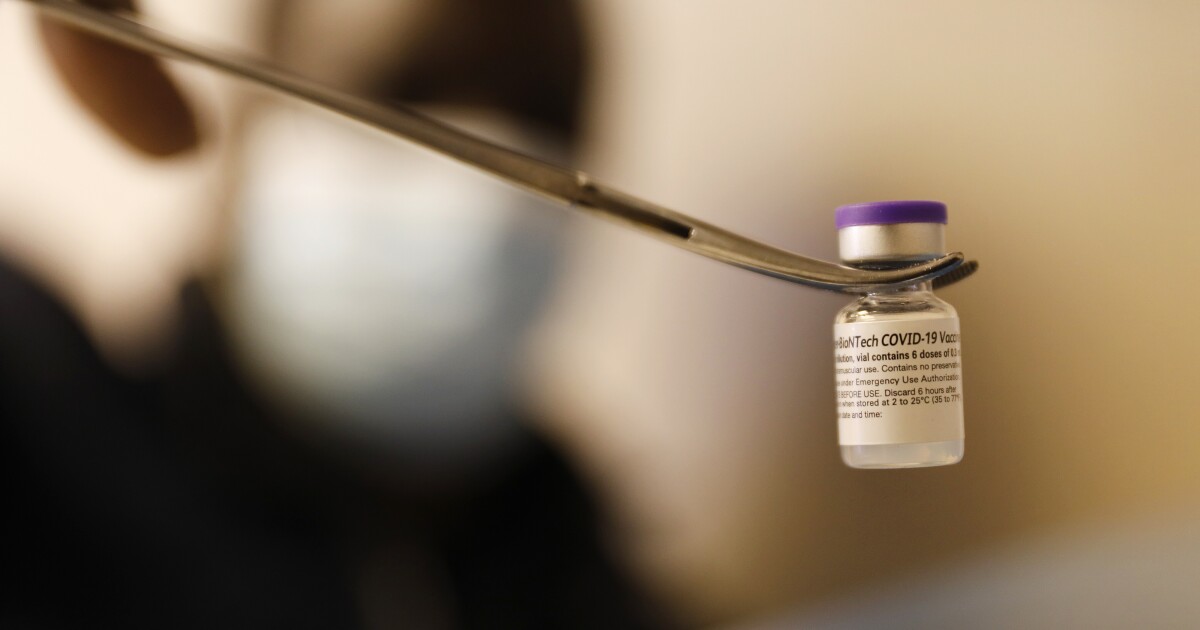 The countdown is on.

California on Thursday announced that all adults will become eligible for a COVID-19 vaccine beginning April 15, spurring an immediate flurry of phone calls, appointment requests and people trying to secure their spots in line.

But the two-week window before the free-for-all begins marks a critical point in the state’s vaccine rollout — particularly for people between the ages of 50 and 64, who become eligible April 1. A patchwork of rules, uncertainty about supply levels and questions about capacity and accessibility remain even as they ready themselves for their turn.

The California Department of Finance, which monitors population data, projects that there are nearly 1.9 million people in L.A. County between the ages of 50 and 64, and 7.2 million in the state. Currently, only about 23% of Californians in that age group have received at least one dose of a vaccine, according to the state, compared with 37% of people 18 to 49, likely due to occupation or health status.

Rafi Nazarians, associate state director at AARP, said the short vaccination window for people 50 to 64 is a cause of some apprehension.

“The two-week period is concerning given the challenges that remain with supply and access to technology,” he said. “We’re going to continue to urge the prioritization of those 50-plus Californians … just to ensure that those who are highest risk are able to obtain vaccines.”

It’s not clear exactly how many people between the ages of 50 and 64 have yet to be vaccinated in L.A. County. Some would have already become eligible either through their work or because they have qualifying health conditions.

“So it’s not like we’re starting from scratch,” said Dr. Paul Simon, chief science officer for the county Department of Public Health.

However, he estimated Friday that somewhere between 800,000 and 1 million additional people would become eligible as of April 1.

“There will likely be a rush. I want to make sure the public recognizes that there may be challenges to getting an appointment immediately,” he said during a briefing. “It just, again, reflects the limited supply of vaccine.”

On a positive note, state officials have said that a major surge of supply is imminent — with weekly allocations expected to grow to about 2.5 million doses over the first half of April — which will help accommodate the huge swell of people.

Federal officials said they expect more than 11 million Johnson & Johnson doses — which require only one shot — will be delivered nationwide next week, a huge number compared with what’s been shipped to date.

L.A. County is already starting to see a boost in its supply of shots. The county anticipates getting 338,100 total doses next week, which is a 21% increase from this week and, Simon said, appears to be the highest weekly allotment to date.

However, it will take time for the county to work through its already lengthy vaccination queue, as well as accommodate those who will soon become eligible.

This, as is the case with so many things in the time of COVID-19, will be a balancing act, Simon said.

“Even with an increased supply of vaccine, we certainly can’t handle close to a million people over that first week, given all the other groups that are also currently being vaccinated,” he said. “But I would expect, over the following several weeks, the demand will diminish a bit and things will open up, particularly as this vaccine supply continues to increase. And so I urge people to just be patient.”

But people over 50 have been tremendously impacted by the pandemic and should not be forgotten, AARP’s Nazarians said. More than 90% of all COVID-19 deaths in California have been people 50 and older, according to state data, and many are still facing issues with mobility, language barriers and technology.

“We’re going to be urging the state of California to do more to reach older adults, particularly those that aren’t online and those who are homebound,” he said. “It’s just important to us that all Californians have access to accurate and transparent information on the vaccines.”

“I am not worried about my ability to secure a vaccine appointment, as I am quite resourceful and technical,” he said, “but I am concerned about those who are older or have less access to digital technology required to fill out forms.”

He was skeptical about the state’s ability to vaccinate the group between April 1 and 14. “California would need to vastly scale vaccine delivery sites and sign-up access to get all residents 50 to 64 vaccinated in two weeks,” Ferrara said.

Contributing to the two-week gantlet is a lack of consistency — not only across the state, but even within some counties. Some parts of California, including Long Beach, and Solano and Contra Costa counties, have already opened COVID-19 vaccine eligibility to people ages 50 to 64. Residents still aren’t sure whether and when it’s acceptable to cross county lines.

And while some counties have already expanded eligibility beyond state guidance, others continue to vie for more supply. In Santa Clara County, which recently moved into the state’s orange tier for further reopening, officials on Thursday once again announced that it was awaiting adequate supply to meet the current and upcoming demand.

“We are excited to expand eligibility. That is why we have been scaling up capacity so rapidly — so that we can quickly vaccinate as many eligible people who live and work here as possible,” said Dr. Marty Fenstersheib, COVID-19 testing and vaccine officer for the county. “Currently, our challenge is not one of capacity or eligibility, but supply.”

The county, like the state, has the capacity to administer a significant number of doses once allocation increases. Officials said the county is capable of delivering 200,000 vaccination per week. So far, 805,000 doses have been administered.

Posing another potential problem is the challenge of access in getting an appointment, and getting to a vaccine destination. A federally run vaccine site at Cal State L.A. had prioritized itself as a destination for people who relied on public transit. The center included a drive-through site in addition to a walk-up facility near the school’s transit hub. It’s unclear how its closure on April 11 will affect those who are less mobile.

Access to obtain an appointment has been an ongoing challenge as more people compete to obtain available slots.

The L.A. County Department of Public Health said its vaccine hotline received a notable increase in calls last week after the state expanded eligibility to nearly 5 million more people. Appointments were difficult to come by for many those first few days, in part because the scheduling website didn’t open for pre-registration prior to the date that eligibility went into effect and a surge in traffic made it difficult for some to get through the system.

“I do think it will be several weeks before I can find an appointment,” L.A. resident Jeanette Ziolkowski, 63, said Friday. Ziolkowski has waited patiently for her chance at a shot, even as she watched her 68-year-old husband receive both of his Pfizer doses. She’s not convinced that there will be enough time for her cohort to get vaccinated before everyone becomes eligible April 15.

“Sixty-five and over has been open since January, and I believe that it is still a struggle for many in that group,” she said.

But as confirmed cases of coronavirus variants increase throughout the state, and some counties see slight increases in projected transmission, state and local officials have stressed the importance of vaccinating residents as soon as possible to avoid another surge.

And despite the tight time frame for the group, many in their 50s and 60s were elated by news of the expansion.

“I am so happy, I can’t even begin to tell you,” said Travis Stewart, 51, who has been quarantined in her Valley Village home for almost 400 days.

For Stewart, the news came much sooner than expected: She thought her shot at a vaccine wouldn’t come until June or July. Now she’s got everything bookmarked on her computer — CVS, Walgreens, My Turn and other sites — ready to go come April 1.

“I feel like what the state is doing is a sort of ‘soft open,’” she said, “to ready the infrastructure for the flood that will be coming their way.”

After so many months of home cooking, Stewart said she is very much looking forward to eating in a restaurant again. And she is happy not only that her chance will come soon, but also that those under 50 won’t be far behind: Her husband, a few years younger than her, will be in the group that becomes eligible April 15.

“It means nothing to me” Stewart said, “unless we are both vaccinated.”