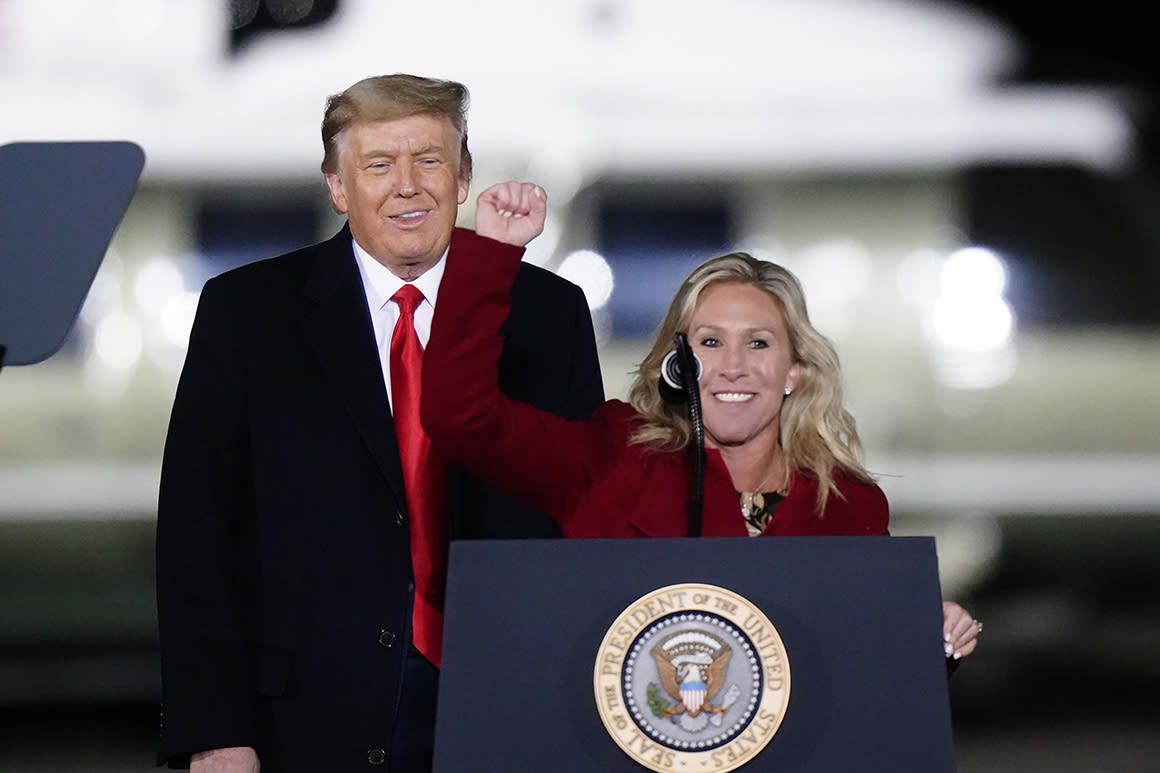 Rep. Marjorie Taylor Greene said that she had spoken with former President Donald Trump, claiming she had his backing in a tweet Saturday morning.

“I’m so grateful for his support and more importantly the people of this country are absolutely 100% loyal to him because he is 100% loyal to the people and America First,” Greene (R-Ga.) wrote in the tweet.

But it’s unclear why or when the purported conversation took place and neither side was immediately willing to discuss it or confirm it.

A spokesperson for Trump declined to comment or elaborate on the former president’s call with the Georgia Republican. The spokesman for Greene’s House office, Nick Dyer, did not immediately respond to a request for comment.

Greene’s claim of Trump’s endorsement comes as the Republican Party faces pressure to punish the freshman lawmaker for her embrace of conspiracy theories and her history of extremist and racist rhetoric. It catches the GOP at a fraught moment, with its trajectory uncertain as party leaders reckon with Trump’s legacy and their newfound lack of power in Washington.

Trump has previously called Greene, 46, a “future Republican Star.” Many other Republicans have condemned Greene’s comments, but GOP House leaders welcomed her into their ranks when she entered Congress and have so far declined to discipline her.

Greene has become an instant lightning rod during her first few weeks in office. She enthusiastically backed Trump’s false claims about a stolen election, and promoted the “Stop the Steal” rallies that preceded the storming of the Capitol building on Jan. 6.

House Democrats have called for Greene to be booted from Congress. On Thursday, Speaker Nancy Pelosi blasted House Republican leadership for allowing her to serve on the House Education Committee, citing her remarks about the Sandy Hook massacre. “What could they be thinking?” Pelosi said. “Or is thinking too generous of a word for what they might be doing?”

Pelosi on Saturday scrubbed out House Minority Leader Kevin McCarthy’s party affiliation in a news release from her office, replacing GOP with “QAnon.”

Greene has embraced QAnon and far-right conspiracy theories, including the notion that Jewish-controlled space lasers were responsible for recent wildfires. POLITICO unearthed a plethora of racist videos she made last summer. Twitter blocked her from tweeting for 12 hours earlier this month after she baselessly claimed that the Nov. 3 election in Georgia had been “stolen” in a tweet that was restricted by Twitter “due to a risk of violence.”

Utah’s Mitt Romney, the lone Republican senator to vote to convict Trump last year, laid into the pair on Twitter on Saturday.

“Lies of a feather flock together: Marjorie Taylor Greene’s nonsense and the ‘big lie’ of a stolen election,” Romney wrote.

McCarthy (R-Calif.) has said he will talk with Greene next week, but it’s unclear if she will face any repercussions. There is a recent precedent: McCarthy kicked ex-Rep. Steve King out of committees after the two met and King didn’t show sufficient remorse for defending white nationalism.

So far, Greene has shown no signs of buckling, and has used the controversy to send fundraising appeals to her supporters.

“I will never back down. I will never give up. Because I am one of you. And I will always represent you,” Greene wrote in a statement Friday afternoon.

Trump and McCarthy met at Mar-a-Lago in Florida Thursday, releasing a photo of the two posing at the resort. Trump and McCarthy discussed strategy to help Republicans win back the House in 2022, according to a readout of the call from Trump’s Save America leadership PAC.

Their relationship had appeared to take a turn after McCarthy said Trump was partially responsible for the Jan. 6 Capitol riots. But McCarthy later back-tracked and said that he didn’t incite the rioters.