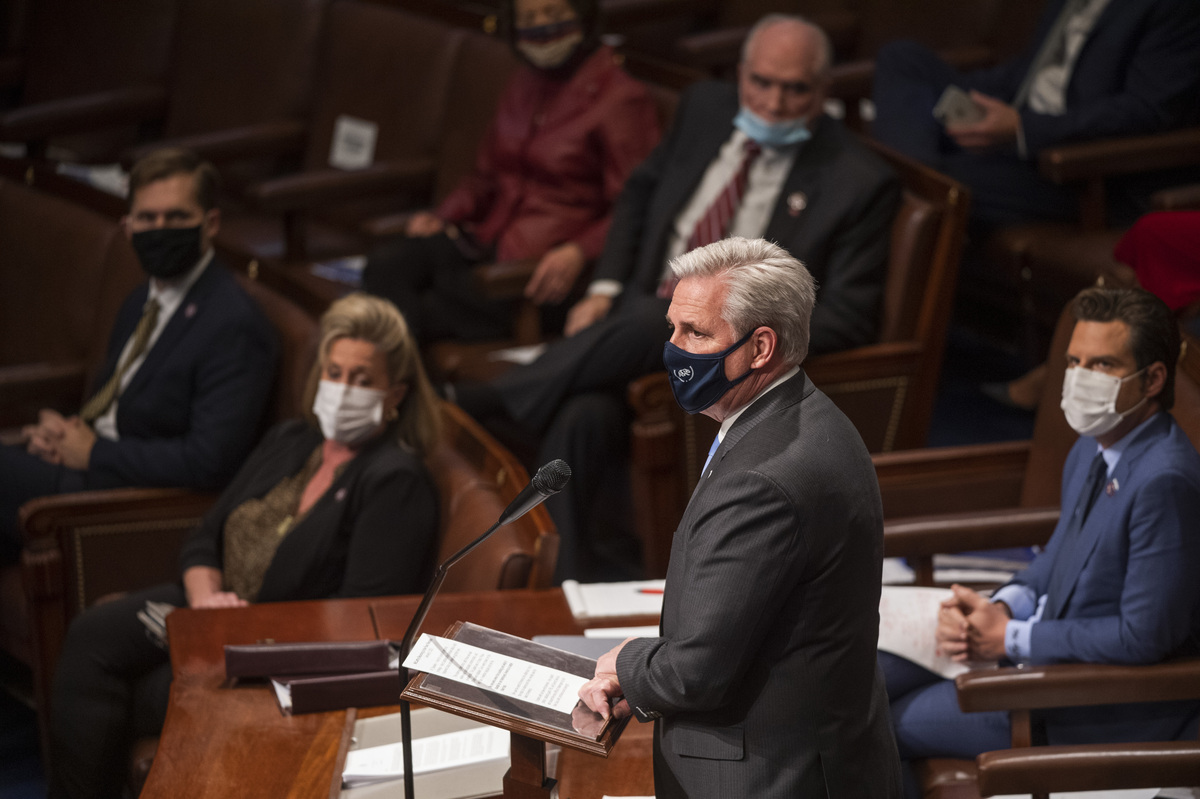 Republican House Leader Kevin McCarthy added his name to a short list of Republicans in Congress who unequivocally blamed President Trump for the insurrection at the Capitol last week.

But with seven days to go in the Trump presidency, he said he will not be voting for impeachment and said he might instead be in favor of a fact-finding commission and possibly censure, items with even less teeth than impeaching but not removing a president.

“The president bears responsibility for Wednesday’s attack on Congress by mob rioters,” said McCarthy, who, during the riot publicly and privately urged President Trump to call for calm.

While McCarthy criticized Trump’s role in inflaming last week’s violence, he joined the majority of his caucus and objected to the certification of the Electoral College results that Trump had called for and were the focal point of the rioters’ anger.

McCarthy, who was once thought to be a potential Trump chief of staff, also swatted down false conspiracy theories that Antifa and left-wing groups were actually responsible for the violence.

“Some say the riots were caused by Antifa,” McCarthy said. There’s absolutely no evidence of that and conservatives should be the first to say so.”

And yet it’s something that’s become pervasive on the not-so-far-right-wing and in parts of conservative media — despite the nation watching on television the thousands marching from a Trump rally outside the White House to the Capitol, flying Trump flags and inspired by Trump’s loss and lie that the election was stolen from him.

That’s also despite evidence showing some pro-Trump supporters plotted and planned the insurrection ahead of time online.

“Most Americans want neither inaction nor retribution,” McCarthy said, despite surveys showing a majority of the country in favor of impeaching and removing Trump from office. Most Republicans do not, however.

“They want durable, bipartisan justice. That path is still available, but is not the path we are on today. That doesn’t mean the president is free from fault. The president bears responsibility for Wednesday’s attack on Congress by mob rioters. He should have immediately denounced the mob when he saw what was unfolding.

“These facts require immediate action from President Trump — accept his share of responsibility, quell the brewing unrest and ensure that President-Elect Biden is able to successfully begin his term. And the president’s immediate action also deserves congressional action, which is why I think a fact-finding commission and a censure resolution would be prudent. Unfortunately, that is not where we are today.”
Source Link