Sen. Bernie Sanders, I-Vt., arrives for Joe Biden’s inauguration sporting mittens made from repurposed wool that were gifted to him by Jen Ellis, a teacher in Vermont. Olivier Douliery/AFP via Getty Images hide caption 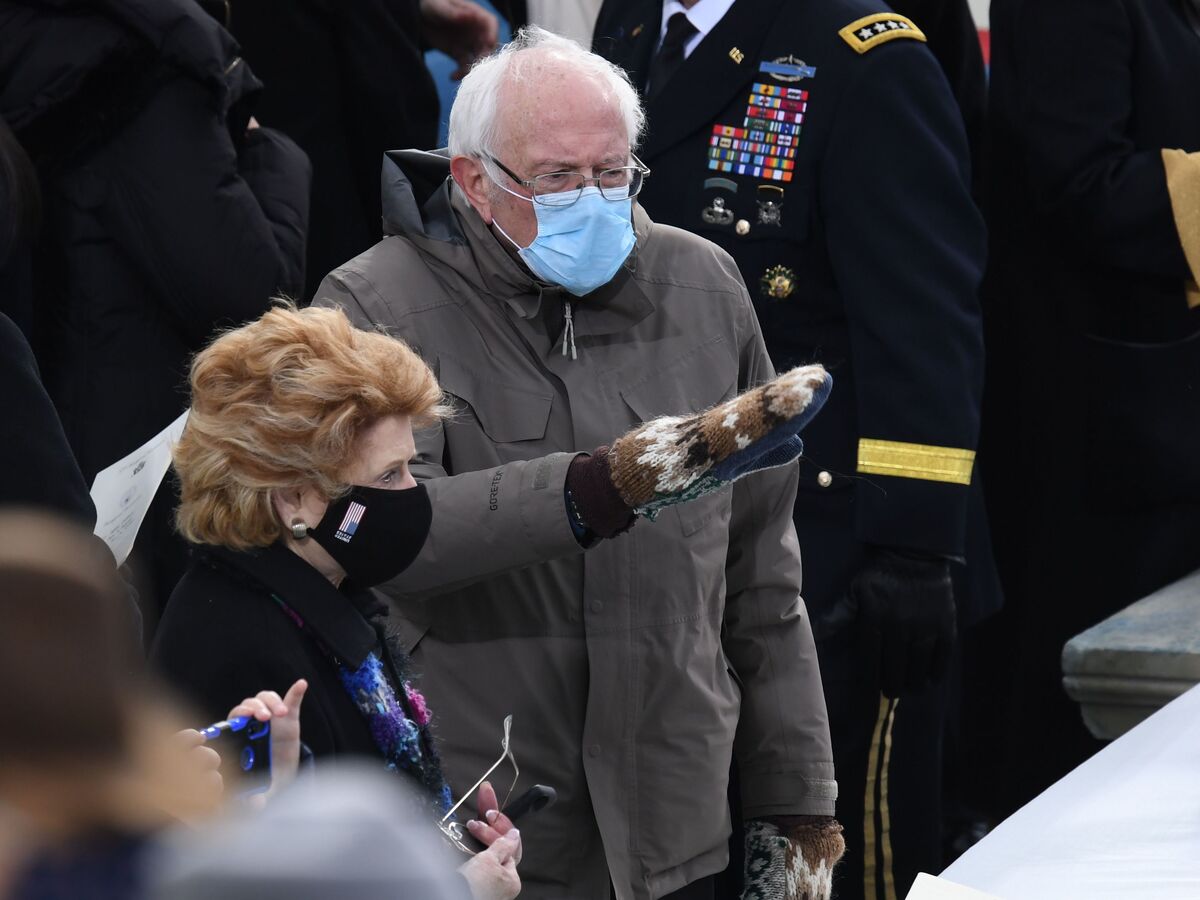 Sen. Bernie Sanders, I-Vt., arrives for Joe Biden’s inauguration sporting mittens made from repurposed wool that were gifted to him by Jen Ellis, a teacher in Vermont.

It seems more than one new star may have been born on Inauguration Day. There was poet Amanda Gorman, who wowed crowds with her recitation of “The Hill We Climb.” And then there were Bernie Sanders’ wool mittens.

Over the last day, images of Sanders have dominated social media feeds as the Vermont senator has received the meme treatment for his appearance at President Biden’s swearing-in ceremony. Sanders was seen sitting in the bleachers, clad in a parka from Burton Snowboards, a Vermont-based outerwear brand, and his hands nestled inside a pair of brown and cream mittens made from repurposed wool.

The mittens were gifted to him by Jen Ellis, a second-grade teacher in Vermont. Ellis made them back in 2016, when she was making presents for her daughter’s teachers. Sanders’ daughter-in-law owned the preschool, which was Ellis’ connection to delivering a pair to the senator himself.

While performers such as Lady Gaga and Jennifer Lopez dazzled in their vibrant, high-fashion outfits on Wednesday, many viewers seemed to appreciate how Sanders’ winter garb felt like a breath of pandemic-appropriate realness.

In an interview with NPR’s All Things Considered, Ellis said the attention around the mittens actually started last winter when Sanders was on the campaign trail seeking the Democratic presidential nomination. She said she never expected them to garner such a big reaction, but she’s glad they’ve held up quite nicely.

Did you have any idea he would wear them so religiously? I mean, he has been spotted in them at several high-profile events.

I had absolutely no idea. I mean, this actually started about a year ago when he was wearing them on the campaign trail. And so there was some Twitter buzz then. … I’m so excited that he likes the mittens and he wants to wear them. They are practical and warm, and they look nice. And, yeah, I had no idea that this is what would happen.

Now, Vogue is talking about these mittens in the same paragraph as, like, haute couture fashion houses that designed inaugural outfits. So how does it feel to be mentioned alongside designers who have runway shows in Paris?

I think that’s lovely. I mean, I’m not very star-struck by fashion. I mean, I’m just sort of a normal-looking person. And I think that it’s really great that Bernie wore something that is accessible to normal people. People can’t afford those lovely outfits that everybody else wore, although they were nice to look at. It was nice to have a little piece of reality, you know, and of normal people in such a prominent event.

Now, as we said, your full-time job is as a second-grade teacher. And so do you think this burst of fame is going to make your students relate to you differently?

Well, a lot of them came in talking about it today. And I showed them a couple of little local clips from our local news people who had covered me yesterday. And they thought it was cool, you know, and I don’t think that they’ll view me any differently in the end. I still was bundling them up in snow pants and their own mittens and sending them out into the snowy day for recess just like half an hour ago.

Biden at G-7 summit: “America is back to the table” – CBS News

Biden at G-7 summit: “America is back to the table” – CBS News