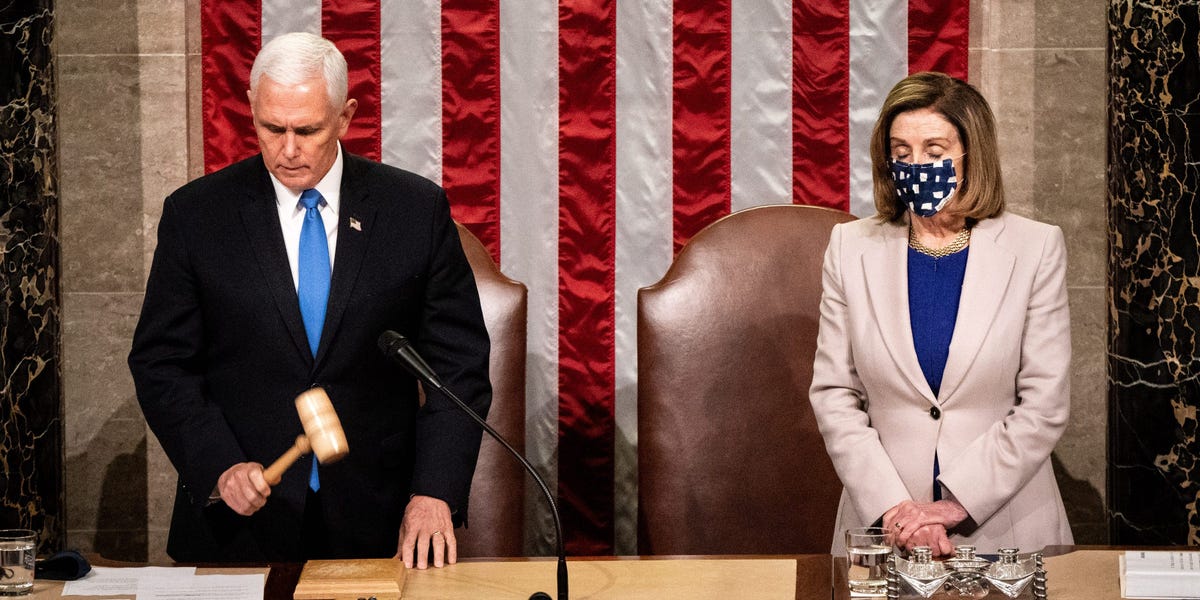 A six-page memo, presented to former President Donald Trump’s legal team just days before January 6 — and obtained by Insider — details a right-wing lawyer’s argument for how the previous administration could remain in power despite losing the 2020 election.

On Monday, CNN published a two-page memo from the attorney, John Eastman, that it said had been obtained by journalists Bob Woodward and Robert Costa and detailed in their new book, “Peril.”

That document outlined a six-part plan for former Vice President Mike Pence to follow on January 6, arguing that the Constitution granted him the right to reject electors from states where Trump’s legal team falsely alleged there was significant voter fraud.

But Eastman, a senior fellow at The Claremont Institute, a conservative think tank, told Insider that document was a “preliminary draft.” He provided a longer document — “the full memo,” dated January 3 and labeled “privileged and confidential”  — that expanded on the novel and extraordinary claim, made in the purported draft, that the 12 Amendment to the US Constitution empowered Vice President Mike Pence to not just count the votes from the Electoral College but unilaterally determine their legitimacy.

“There is very solid legal authority, and historical precedent, for the view that the President of the Senate does the counting, including the resolution of disputed electoral votes,” Eastman wrote, stating that “all the Members of Congress can do is watch.”

Under this scenario, Eastman maintained that Pence could decide to count “Trump electors” that had been approved by Republican-led state legislatures — even after those states had already sent a certified slate of electors, approved by their governors, for President Joe Biden.

Even if there were not competing, pro-Trump slates, Eastman argued, Pence could thwart Biden’s victory by deciding for himself, “based on all the evidence and the letters from [pro-Trump] state legislators calling into question the executive certifications,” to not accept any slate.

Kermit Roosevelt, an expert on constitutional questions at the University of Pennsylvania Carey School of Law, told Insider the arguments are shocking. “We knew this theory was out there, but it’s alarming to see that it was written up and presented to Trump’s legal team and presumably taken seriously by them,” he said.

Roosevelt said that, while he did not doubt Eastman’s sincerity, he could not understand the reasoning.

“Legally speaking, the analysis is bad,” he said. Even if there were dual slates of electors — there were not — “it’s a fringe view to say that the vice president gets to decide which is valid.”

“I would say that this is a proposed coup cloaked in legal language,” Roosevelt added.

In total, Eastman suggested Pence could reject slates of electors from seven battleground states, including Pennsylvania, Georgia, and Arizona, disenfranchising millions of voters. To bolster this argument, he claimed it was “a position in accord with that taken by Harvard Law Professor Laurence Tribe.” A former Obama administration official, Tribe had cowritten an article in September 2020 — on scenarios where Trump could attempt to subvert the will of voters — that noted elections are decided by who has a majority of electors that are “appointed,” not necessarily the majority of electors from all states.

In a post on Twitter, Tribe accused Eastman of taking “snippets of my work wholly out of context.” He has never argued the vice president alone can determine the legitimacy of a state’s electors.

Eastman, who told Insider he presented the memo to Trump’s lawyers, said he only intended to cite Tribe’s uncontroversial view that there is no minimum requirement for the number of electors that ultimately decide a presidential contest.

Have a news tip? Email this reporter: cdavis@insider.com

U.S. billionaire tax proposal seems to unite Democrats – but will it work? – Reuters

U.S. billionaire tax proposal seems to unite Democrats – but will it work? – Reuters

N.J. weather: Fierce nor’easter to soak state with up to 6 inches of rain. Flooding, gusty winds in latest up – NJ.com