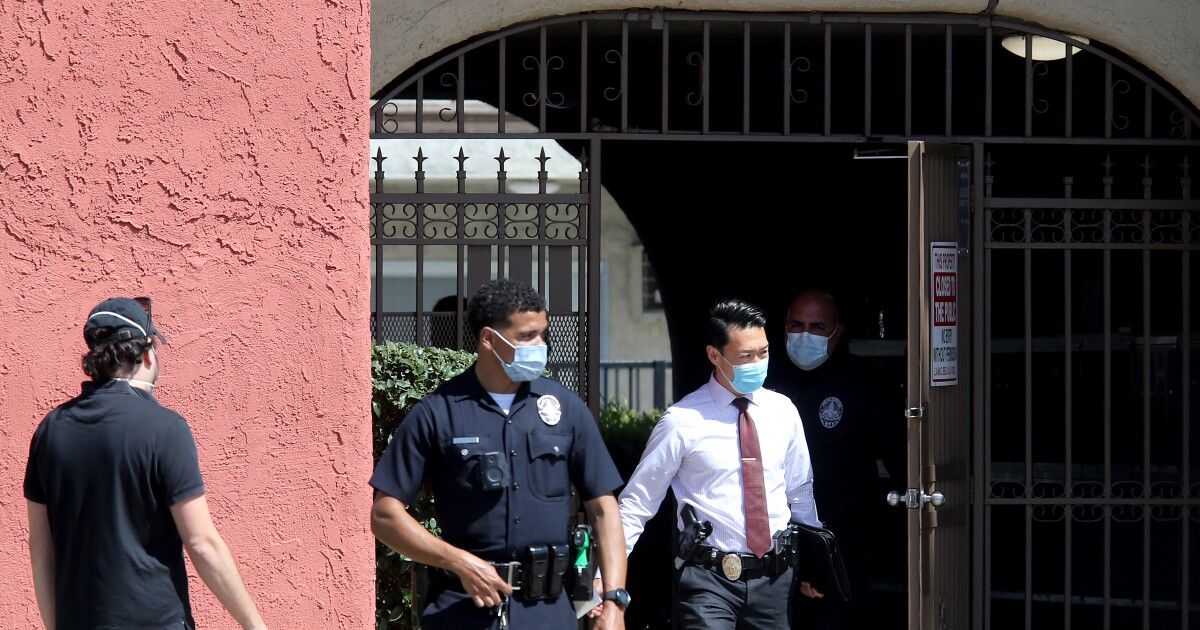 A mother whose three young children were found slain in their San Fernando Valley apartment Saturday morning has been arrested after fleeing the scene, police said.

Liliana Carrillo, who police identified as the main person of interest in the case, was taken into custody in Tulare County after leading authorities on a long-distance chase in which she allegedly carjacked a pickup truck in Bakersfield, authorities said.

The children’s grandmother called police after she discovered the children dead Saturday morning at an apartment complex in Reseda and their mother gone, authorities said.

Officers responded to the apartment complex in the 8000 block of Reseda Boulevard about 9:30 a.m., police said. They discovered the bodies of the three children — ages 3, 2 and 6 months — inside.

Initial reports indicated that the children had been stabbed but authorities did not confirm a cause of death. No motive was given for the slayings.

“These are the moments we carry throughout our career,” Lt. Raul Joel said at the scene, noting that innocent lives had been lost. “It’s hard to process that as a police officer.”

He said there had been no prior calls to police at the residence.

Neighbors gathered outside to watch reporters conducting interviews, with children milling around in the grass.

Melody Yepez and her husband Edward, both 64, who have lived in the building across the street for 10 years, said the slayings shocked them. The couple had gone to the bank Saturday afternoon and returned home to find the neighborhood flooded with police.

“We knew something was terribly wrong,” Edward said.

The couple said the neighborhood has been plagued by lower-level crimes for years.

“Being around here and being older, there are times we don’t feel safe,” Melody said.

Mishal Hashimi, 35, and her daughter Ayesha, 6, have lived in the neighborhood for two years. Mishal said they’ve been wanting to move because they feel the area isn’t safe and she doesn’t want her daughter to attend grade school there.

She said its been hard because she also takes care of an elderly parent. But now, she suspects they’ll step up their efforts.

“This happened right in front of our apartment,” she said. “It’s too close to us.”

She said she was stunned to learn that a mother was suspected of killing her children.

“Nobody would believe a parent would do such a thing to their own children,” she said. “If you have a child, you know how innocent they are.”

She said parents who are unable to take care of a child can always find ways to get help.

“The church is right here across the street,” she said, gesturing to New Horizon Church at the end of the block. “It would have taken less than two minutes to walk there.”

Resident Corina Huertas, 28, said she has lived across the street for two years and was stunned to hear about the slayings.

“Who does that to innocent kids?” she said. “They didn’t ask to be born.”

The cause of death has yet to be determined, as well as a motive. At this time we are asking for the public’s help in locating a person of interest in this case, a female Hispanic 30 years old named Liliana Carrillo. pic.twitter.com/cbwPSuldvh

This is a breaking story. Please check back for updates.