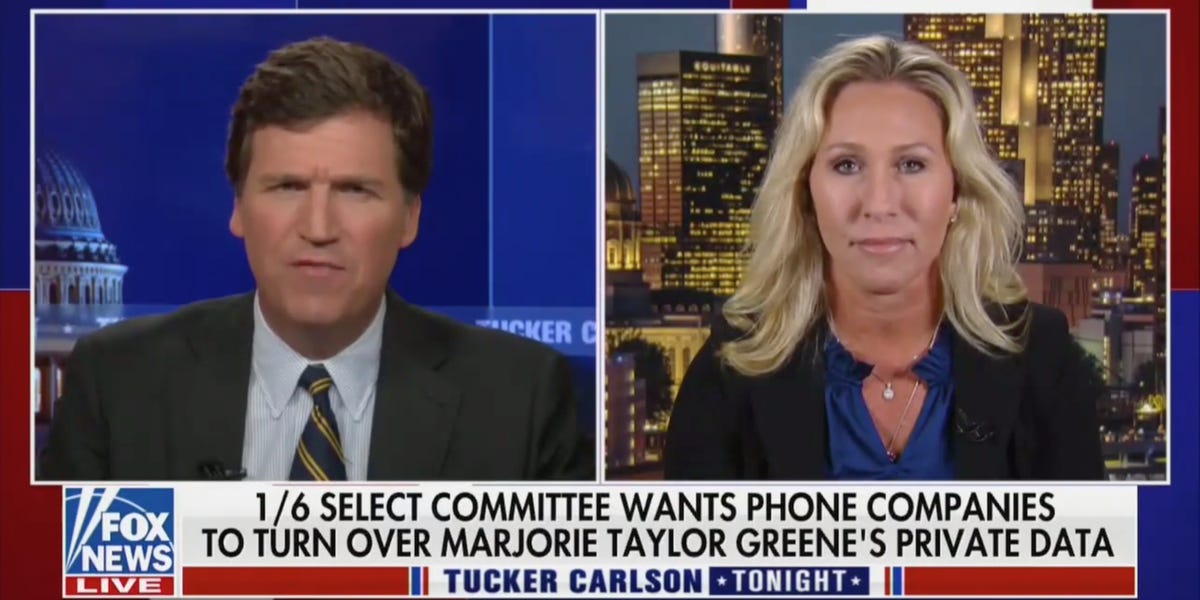 Rep. Marjorie Taylor Greene claimed on Tuesday that any telecommunications company that complies with a request to hand over Republicans’ messages to the January 6 commission would be “shut down.”

The House committee is investigating the circumstances surrounding the Capitol riot.

On Friday, the group asked social-media companies to turn over records related to the riot. On Monday, it asked 35 social-media and telecommunications companies to “preserve” records from a list of Republicans in Congress, former President Donald Trump, and Trump’s family.

Several Republicans described those requests as a form of authoritarian overreach, a theme that dominated Greene’s appearance on Fox News’ “Tucker Carlson Tonight” on Tuesday.

The discussion appeared to react to both requests. Though the committee has not named the members of Congress on the list, sources told CNN that several Republicans, including Greene, were on it.

Fox News reported that the committee was seeking Greene’s phone records, though no telecommunications company has been asked to hand anything over.

“If these telecommunications companies, if they go along with this, they will be shut down. And that’s a promise,” Greene told Carlson, without elaborating on how that would be achieved.

The ultraconservative Georgia Republican has expressed support for the QAnon conspiracy-theory movement, which had a presence at the January 6 riot. She has also suggested that the pro-Trump rioters were not actually Trump supporters.

On Fox News, Greene said the House committee was on a politically motivated “witch hunt.”

“If members of Congress can have their personal cellphone data exposed … just to hurt us politically in the next election, then we are going into a dangerous place in this country,” she said.

She predicted the GOP would retake the majority in the House in the 2022 midterm elections and said it “will take this very serious.”

When Carlson suggested that companies that hand over records be shut down, Greene agreed. “We will,” she said, without elaborating.

McCarthy did not immediately respond to Insider’s request for information about which law the committee was breaking. He has resisted the committee’s makeup, saying in July that the GOP would launch its own investigation into the riot.

The committee, whose members were selected by House Speaker Nancy Pelosi, has long been a source of contention between the parties. In May, Republicans in the Senate filibustered a proposal for an equally weighted, bicameral commission that would have allowed each party to name its members.

Pelosi pushed ahead with a select committee, which Republicans have criticized as overly political. She rejected two of McCarthy’s picks — Reps. Jim Jordan and Jim Banks — on the grounds that they had voted against certifying the results of the 2020 election.

McCarthy then withdrew all five of his nominees, effectively withdrawing much of the GOP support for the effort.

Fox News and Greene did not immediately respond to Insider’s request for comment.